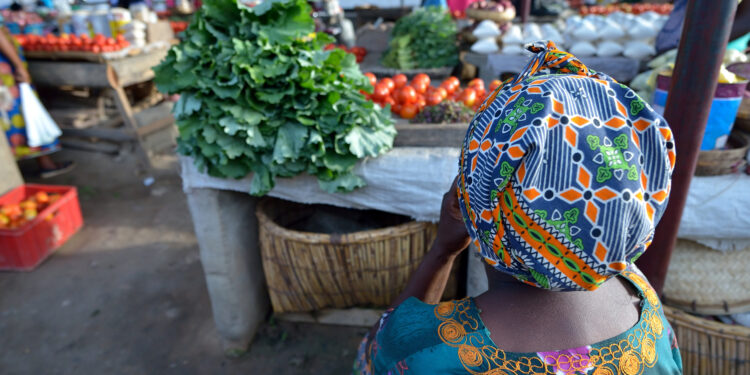 A woman with her produce in a market. AfCFTA should bring in more women to trade. [Photo/GI-ACE]

Harnessing opportunities afforded by AfCFTA by looping in women

The inclusion of several gender-related provisions in the agreement setting up the AfCFTA has a lot of power to help women get more involved in trade.

by Njenga Hakeenah
in Business, Industry and Trade
0
Share on FacebookShare on LinkedIn

African women in business can take pride in the fact that the agreement setting up the African Continental Free Trade Area (AfCFTA) explicitly acknowledges that gender equality is important.

In Article 3(e), the AfCFTA wants to “promote and achieve sustainable and inclusive socio-economic development and gender equality, as well as structural transformation.” Article 27(d) of the AfCFTA Protocol on Trade in Services, on the other hand, says that formal and informal service providers should be able to export more, with special attention paid to “micro, small, and medium-sized operators” and “women and youth service providers.”

In light of the fact that international trade plays an important role in promoting gender equality, the inclusion of several gender-related provisions in the agreement setting up the AfCFTA has a lot of power to help women get more involved in trade.

Women’s role in trade and economic growth is significant and across Africa; they have mostly worked in export-oriented industries like textiles and clothing, agriculture, and tourism.

For long, women have been stuck in low-paid labour but with increased demand for skills, things are changing. The AfCFTA offers an opportunity for African women to take a deep dive into the opportunities it offers. Women are now taking on more jobs in wholesale and retail trade, finance, business services, and hospitality which have prepared them for the opportunities that the continent offers under the trade agreement.

Intra-African trade is expected to rise by between 33 per cent and 52 per cent but this is dependent on how much tariff liberalisation takes place between African countries.

Just like in other parts of the world, women who want to trade in Africa face similar problems but the AfCFTA offers them a lifeline going by the intention of parties to improve trade for African women and promote their economic development in general.

Under the African Free Trade Agreement, African women can use export opportunities to grow their businesses and reach new markets.

Despite the fact that the Agreement has only a few provisions that help women trade, women should negotiate for schedules of concessions and commitments for both goods and services.  This is a challenge, however, since there is no representative body within the AfCFTA yet to deal with or push women’s issues.

On the other hand, governments should put in place policies that allow women to competitively engage in trade without limitations.

The only way, for now, that women can advance their agenda in the Agreement’s implementation is to use the different bodies they are in to negotiate better terms.  Institutions like the International Trade Centre (ITC)’s SheTrades Initiative or the African Women In Business (AWIB) can become a platform to advance women’s agenda in the AfCFTA.

On the other hand, governments should put in place policies that allow women to competitively engage in trade without limitations.

Further, governments can open trade in some goods and services sectors to women which could give them more chances to benefit from the AfCFTA.

Through the SheTrades Initiative and AWIB and other like-minded bodies, African women should also push for more opportunities to be involved in export and import activities under the AfCFTA while governments can focus on businesses owned and run by women to offer them the support they need to thrive.

To make this work, governments need to talk to women-owned businesses, female employers and employees, women’s groups, and other people who represent women to assess what their areas of interest are. The women, on the other hand, should include the challenges, strengths and potential of their businesses in their schedules of concessions and commitments to governments.

This is important because commitments in some sectors can have a big impact on women both positively and negatively.  Women should be involved in deciding which sectors should be committed to, and this will help them figure out where more attention is needed and where more progress can be made in an inclusive design of schedules of concessions in goods and services.

AU’s role in enabling women trade under the AfCFTA

The AU is the largest group of countries in the world with 55 member nations. The AfCFTA is part of the larger Africa’s Development Framework Agenda 2063 project. The continental body can help women tap the nearly 1.2 billion people market-opening opportunities for them in what is the world’s largest free-trade zone.

Just as it happened with the AfCFTA, the AU can work on and implement policies that empower African women in business to trade. Borrowing from policies that have worked in countries like Kenya, the AU can ensure that women have a certain percentage of business set aside for them. In Kenya, the government has a policy where women can do business with the government through an allocated avenue. In some cases, there is a 30 per cent business that can only be done by women in Kenya’s government.

This is well laid out in tendering processes and government offices have to allocate 30 per cent of their tenders to women. The AU can follow the same protocols and ensure that African women in business are not disadvantaged while participating in intra-Africa trade under the AfCFTA.

The Commonwealth Trade Hot Topics issue of 2021 shows that countries in the AfCFTA can choose which sectors they want to make commitments and eliminate “pink tariffs”.

In general, the non-sensitive products can be implemented in less time: 5 years for non-Least Developed Countries (LDCs) and 10 years for LDCs.

It takes longer for the sensitive products to be implemented: 10 years for non-LDCs and 13 years for those who live in the LDCs. List of things not included: Products that countries choose to keep women traders in business and keep their exporters at the top of their game.

Stakeholders in the AfCFTA implementation should think about making commitments that encourage female-owned and female-run businesses to trade. For instance, garments and textiles industries in countries such as Nigeria, South Africa, Uganda, and Tanzania could ask other AfCFTA countries for more market access.

This is because these industries are mostly owned and run by African women in business, and they also have a lot of female employees. As another option, Kenya could put textiles in a basket that takes a long time to put together and open some parts of its retail sector to let women buy cheaper products from other countries.

In addition, depending on the commitments made, the textile and clothing industry has a lot of room for value addition and jobs for women. It is thought that up to 600 per cent of value can be made in the cotton value chain alone: from cotton production, spinning and twisting into yarn, to weaving and knitting into fabric, then dying, printing, and designing.

This value addition then moves up the textile and apparel value chain, where sourcing from the region can be cheaper thanks to duty-free access and more business-to-business sales of intermediate products.

African women play a big role in cotton production right now by planting and picking, not by making and selling it. When you move up the value chain, the same thing happens, as well.

There should not be any more than 3 per cent of tariff lines that are free. The parties to the agreement can decide to open up more quickly and more deeply than the modalities say they can.

The Hot Topics issue adds that African countries can protect their most gender-sensitive sectors from the competition while opening up other sectors to make them more competitive or to get more investment.

To protect African women in business, especially exporters from the competition, countries can put certain tariff lines in the “sensitive” category or “exclusion list” category. This way, they can protect the sectors until they become more competitive. During negotiations, a country can ask for preferential market access for certain goods, sectors, or activities in other countries that are part of the AfCFTA.

This can help strengthen the country’s position in the trade agreement.

Read: Leaving no one behind: The ideal of the AfCFTA