Nigeria economy is projected to expand by 1.9 per cent in 2021, which is down 0.2 percentage points from last month’s forecast,. 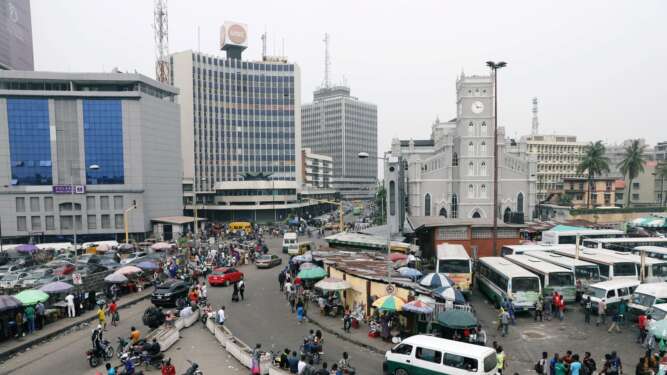 Africa’s top economy and oil exporter, Nigeria is battling yet another economic hurdle, as the government disagrees with the International Monetary Fund’s (IMF)recommendations of lowering its currency that’s more than 18 per cent overvalued to ease external imbalances, according to Bloomberg News.

According to IMF February 8, 2021, press release, Nigeria has been hit quite hard by the COVID-19 pandemic, following a sharp decrease in oil prices and capital outflows, real GDP is estimated to have contracted by 3.2 per cent I 2020 amidst the pandemic-related lockdown.

The devaluation pressure from IMF is not new to Nigeria. In 2014 the Nigerian central bank devalued the naira by nearly 8 per cent and then fixed the official exchange rate at 198 to the united states dollar, according to the Africa report, October 2015 publication.

On the other side of the saga, on January 28th 2021 Bloomberg News, reported that Nigeria’s central bank was probable to devalue the naira by as much as 10 per cent this year amid a lingering dollar shortage in the country.

Meanwhile, IMF finds Nigeria to be in the least competitive zone, as it argues that, “socio-economic conditions have deteriorated with rising food inflation, elevated youth unemployment, mass protests in October 2020, and surveys show worsening food insecurity with a significant impact on the vulnerable”

The Washington-based lender went further in its press release and noted that Risks are tilted to the downside and include the resurgence of the pandemic, security situation and unfavourable external environment. Capital outflow risks arise from the record-low domestic interest rates and large foreign holdings of domestic securities.

“If you don’t have sufficient dollars, the idea that you’re controlling the naira is a fiction. It is impossible to get sufficient investment for the economy to grow above 6 per cent without a unified exchange rate” he added.

Hence, as the region top-economy dwelled in recession and starved for cash, the government of President Muhammadu Buhari, who has promised 10 per cent annual growth, agreed to merge the country’s multiple exchange rates and allow the naira to float more freely. The World Bank is withholding a $1.5 billion loan until the government moves ahead with currency reforms to attract investment (Bloomberg News).

On January, Bloomberg News cited that, under the leadership of Godwin Emefiele—central bank governor, the Nigerian government has tried to preserve dollars by restricting importers access to hard currency, limiting dollar sales and reducing international spending.

Further, the discrepancy underscores the policy challenges for the administration that has resisted growing calls from some businesses and state governors bruised by an artificially overvalued currency to liberalize the exchange rate, according to information from Bloomberg News.

According to the IMF press release, the executive directors welcomed notable reforms undertaken in the financial sector, including removal of the fueled subsidy and steps to implement cost-reflective tariff increases in the power sector.

“Directors noted that multiple rates, limited flexibility, and foreign exchange shortages are posing challenges. They recommended a gradual and multi-step approach to establish a unified and clear exchange rate regime with the near-term focus on allowing for greater flexibility and removing the payments backlog,” the IMF press release reads.

IMF executive directors went further and observed that the accommodative monetary stance remains appropriate in the near term, although tightening may be warranted if the balance of payments or inflationary pressures were to increase. In the medium term, the monetary policy operational framework should be reformed and Central Bank financing of budget deficit phased out to reduce inflation (IMF).

According to Bloomberg News, inflation in Nigeria peaked to a three-year high of 15.8 per cent in December and while a 10 per cent currency devaluation could propel the rate higher to as much as 2.5 per cent points, the impact would be less if the parallel exchange market rate is already reflected in the prices of imported goods.

Nigeria is battling COVID-19 economic shocks just like the rest of African nations, hence the IMF, insisted for continued vigilance to contain financial stability risks while welcoming progress in structural reforms and called for continued reforms aimed at promoting economic diversification and reducing the dependence on oil and increasing employment.

READ:Why cryptocurrency transactions have been banned in Nigeria