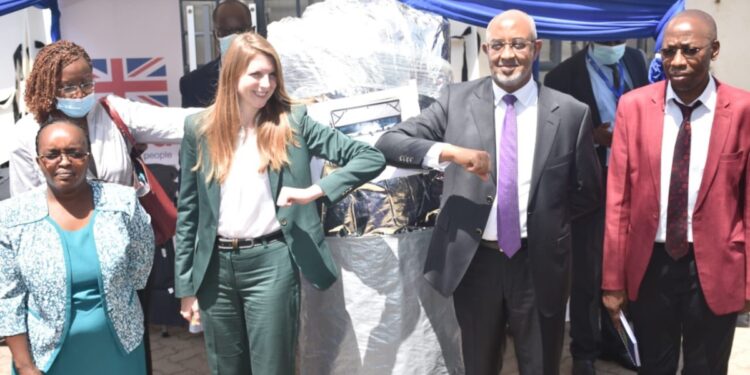 Jane Marriot and Rashid Anan during the donation of forensic equipment to Kenya. Photo: MOH_Kenya

The equipment will go a long way in supporting forensic investigations

Health Chief Administrative Secretary Dr Rashid Aman said the donation resulted from the partnership and cordial relations between Kenya and the United Kingdom.

“I acknowledge the support the Government of the United Kingdom is providing to the health sector and the new initiatives in the areas of Kenya-United Kingdom Health Alliance, health labour migration, global health security and response to COVID-19 pandemic among others,” added Dr Aman.

Aman received the equipment from the British High Commissioner to Kenya Jane Mariot.

He spoke at a function held at the Kenyatta National Hospital.

Dr Aman noted that the equipment, in addition to other support provided, will go a long way in supporting forensic investigations in instances of mass casualties, including those due to terror-related activities and disasters.

The CAS said the role played by forensic medical services to the public health and safety in the country cannot be underestimated.

“We acknowledge the challenges faced by our officers in providing this service, and I wish to recognise their efforts and successes despite the challenges,” he added.

He appealed to all partners to continue supporting various initiatives to address these challenges.

Dr Aman noted that the Ministry of Health remains committed to improving forensic medical services, especially in managing victims and bodies due to mass casualties and terror-related activities.

The donation was not the first time Kenya and the United Kingdom have collaborated in healthcare.

In 2021, Britain announced a new programme that will allow unemployed Kenyan nurses to work in the United Kingdom as part of a new scheme requested by the Government of Kenya and launched by President Kenyatta on July 29 during his visit to London.

The British High Commission said Kenyan health professionals and health managers out of work are eligible to work in the UK before returning to work in Kenya’s health sector.

According to the Commission, the particular arrangement for Kenyan nurses to work the UK was part of a request by Kenya to capitalise in those qualified but unemployed health workers in Kenya.

Javid said the United Kingdom has a historic and mutually respectful relationship with Kenya, adding that this has been strengthened by working closely with Kenya during the pandemic and sharing UK vaccine doses to support Kenya’s fight against COVID-19.

“Our healthcare agreement will make the most of UK and Kenyan health expertise, which will benefit both countries, with the exchange of knowledge and training that will provide first class healthcare.”

Also commenting on the particular programme, Jane Marriott, the British High Commissioner to Kenya, said the health partnership between the United Kingdom and Kenya is 30 years old and growing stronger by the month.

She added that the new agreement on health workers would allow the two governments to share skills and expertise further.

In 2020, before the pandemic, President Uhuru Kenyatta announced he was seeking to forge a strategic partnership with the University of Manchester and Christie NHS Foundation to strengthen the healthcare sector in the country.

President Kenyatta held talks with visiting officials of the University of Manchester and Christie NHS Foundation as a follow up to the signing of an MoU between Kenya and the two British institutions on the sidelines of the recent UK-Africa investment summit in London.

Kenya would benefit from a comprehensive skill upgrade programme for health experts in specialist areas such as heart, kidney and cancer diseases.

Through this partnership, Kenya would support establishing a cancer centre of excellence at the KUTRRH.

“Our desire is not only to make Kenyatta University a Centre for Research and Treatment but also to reduce the costs in the treatment of non-communicable diseases,” the President said.