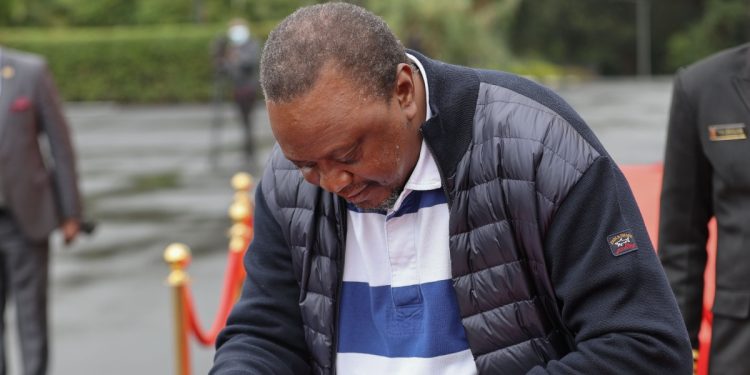 "The president has authorised an additional fuel subsidy of KSh 16.675 billion ($144 million) to cushion Kenyans from a further increase in fuel prices"

The government of Kenya has announced a fuel relief targeting consumers who have been paying the highest prices ever recorded in the East African country.

On June 14, 2022, the government’s spokesperson Kanze Dena informed the public that the government had left prices of the commodities unchanged, amid a steep rise in the cost of living.

The decision to leave the prices unchanged came after the government tapped KSh 16.7 billion from the fuel stabilisation kitty to compensate oil marketers.

“His Excellency, the President understands that high fuel prices pose a significant challenge for every Kenyan household and collectively on the economy and our way of life,” Dena said on behalf of President Uhuru Kenyatta.

“It is notified that His Excellency the President has today authorised an additional fuel subsidy of Ksh. 16.675 Billion, to cushion Kenyans from a further increase in fuel prices. With today’s presidential action, diesel will continue to retail at Ksh. 140.00, petrol at Ksh.159.12 and Kerosine at Ksh.127.94.”

Further, State House Kenya noted that without such state interventions, the pump prices would have been KSh 193.64 for diesel, KSh 209.95 for petrol and KSh 181.13 for Kerosene.

The government’s decision came when Kenya’s inflation has hit a record high.

“As a caring Government, we will continue to roll out similar actions so as to provide further direct relief to all Kenyan families and establish the necessary safeguards for protecting Kenyan consumers from further increases in the cost of living.”

The Energy and Petroleum Regulatory Authority (Epra) has since March gradually increased pump prices amid skyrocketing prices of crude in the global market.

The Exchange Africa recently reported that economic experts had projected that Kenya’s cost of living will remain high following the recent hike in fuel prices in the East African nation.

In their latest report, experts from Cytonn Investments said that fuel is a major contributor to Kenya’s headline inflation and fuel prices are a major input cost in most of Kenya’s sectors. The sectors include manufacturing, transport, and energy.

Further, the experts noted that the business environment is expected to deteriorate even further as consumers are likely to cut spending.

Cytonn’s report further noted that global fuel prices have recorded a 45.2 per cent increase since the beginning of the year to USD 123.7 per barrel as of 16th May 2022, from USD 85.2 per barrel recorded on 3rd January 2022, driven by persistent supply chain constraints worsened by the geopolitical pressures occasioned by the Russian invasion of Ukraine.

These are the highest prices witnessed globally, since 15th March 2012, when prices reached USD 124.3 per barrel. Kenyans have been largely cushioned from the high prices by the fuel subsidy program under the National Treasury.

“However, we have maintained that the programme is unsustainable and will be depleted should the average landed costs of fuel continue to rise,” the experts noted.

Separately, The Exchange Africa had earlier reported that Kenya’s average inflation rate increased to 6.3 per cent in the first half of 2022, compared to 5.9 per cent in a similar period in 2021.

Cytonn Investments attributed the rise to a 13.8 per cent and 7.1 per cent year-on-year increase in food and oil prices, respectively.

For instance, inflation for June 2022 came in at 7.9 per cent, the highest since August 2017 and an increase from the 7.1  per cent recorded in May. The report said the rise was on account of a 1.2 per cent, 1.5 per cent and 0.9 per cent increase in the food and non-alcoholic beverages index, household and equipment and transport index.

The June 2022 year-on-year inflation rate is the highest since August 2017.

“For the first time in five years, Kenya’s inflation has surpassed the government’s target range of 2.5 per cent – 7.5 per cent, despite efforts by the Monetary Policy Committee (MPC) to contain the rise by raising the Central Bank Rate (CBR) to 7.5 per cent. The increase is mainly attributable to the rise in food and fuel prices amid supply chain constraints coupled with a depreciating currency.”

Zambia plans on scrapping US$2 billion projects to reduce debt