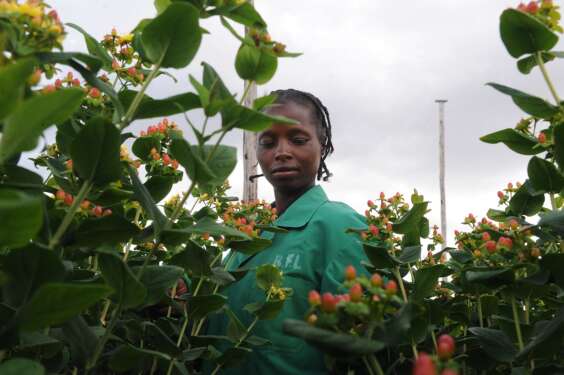 A flower farm worker. Kenya is signing trade deals which are raising tensions among trade bloc members in Africa. [Photo/CNN]

Kenya is working towards securing multi-billion dollar markets with different countries as it seeks to bolster its somewhat economy which is now facing an unemployment crisis.

Months after the East African nation saw the United States amend its Air Transport Agreement to facilitate the movement of goods by providing air carriers greater flexibility to meet their cargo and express delivery customers’ needs more efficiently, the country is on another courtship for the lucrative European market.

In February this year, President Kenyatta met with President Trump where the two discussed increased trade partnerships with the US.

Last month, Kenya and the United Kingdom moved closer to a trade deal which will see East Africa’s investment hub avoid tariffs on key goods imported to the UK each year. The country exports 35,000 tonnes of vegetables, 9 per cent of all flowers and 43 per cent of all tea the UK imports.

One of the most notable non-food company is the Nodor Darts Company based in Kenya’s Athi River and which produces approximately 10 thousand dartboards weekly. 70 per cent of all tournament-grade dartboards globally are produced in Kenya.

The UK-Kenya trade agreement will be the sixth bilateral trade deal in Africa today. It will allow British and Kenyan companies to expand on trade already worth £1.4 billion (Ksh 200 billion) a year.

Once signed, the UK-Kenya free trade agreement will guarantee tariff-free access to both markets as agreed during a virtual meeting between senior Kenyan government officials and their UK government counterparts.

Kenya is regarded as the largest economy in the region and ranked amongst the top ten in Africa making it a key trade partner with the UK. The agreement is being treated as a platform to expand into the East African region by the UK government as it also opens up the potential for further deals with the East African Community (EAC).

The UK is Kenya’s fifth-largest export destination after Uganda, Pakistan, United States and the Netherlands.

2018 data shows that 35.2 per cent of Kenya’s exports by value were delivered to African countries. Asia accounted for 30.5 per cent of these exports while 24 per cent worth of goods went to Europe. The Americas accounted for a smaller percentage of these exports with North America taking 8.4 per cent, Latin America excluding Mexico but including the Caribbean (0.9 per cent) then Oceania led by Australia (0.5 per cent).

The British High Commissioner to Kenya, Jane Marriott, said she was delighted to have been able to conclude this trade agreement, “which lays the foundations to expand our trade in future.”

She added that trade between the two countries continues to grow.

The UK’s Minister for Africa, James Duddridge, said that the UK will keep championing liberal free trade that prioritises the mutual benefits of doing business with integrity.

According to the UK’s International Trade Minister, Ranil Jayawardena, the deal gives businesses the certainty that they will be able to continue trading as they do now, supporting jobs and livelihoods in both countries.

“I look forward to forging further trade ties with Kenya – the largest economy in the region – and working with other East African countries to agree to trade continuity, harnessing free and fair trade to secure shared prosperity for our peoples,” he added.

The agreement will be formally signed after being subjected to formal checks.

In January of this year, President Kenyatta and Prime Minister Boris Johnson agreed to a five-year strategic partnership between the UK and Kenya which was signed in Downing Street during the Africa Investment Summit.

The latest deal, just like the five-year one, has been criticised with opponents arguing that the deal will harm regional trade.

Trade campaigners say that the deal risks undermining established regional trade relationships in East Africa since the bilateral deal with Kenya could create extortionate barriers to trade in the region which also hosts Uganda, Burundi, Rwanda and Tanzania.

In September, the EAC trading bloc warned Kenya not to continue with the UK deal without consensus raising concerns that a UK-Kenya deal undermined the EAC’s customs union which operates a common external tariff.

Just as with the US deal, questions now abound over what happens to the trading blocs agreements that Kenya is part of since the East African nation seems to be unilaterally making decisions regarding trade partnerships.

With the Africa Continental Free Trade Agreement (AfCFTA) expected to come into force any time now, it remains to be seen how Kenya will juggle its obligations to all the trading partners who could be in conflict with its latest decisions.

China, which remains Kenya’s biggest trading partner, accounts for 17.2 per cent of Kenya’s total trade. Its opinion on the trade deal signings is yet to be known.

EAC has to join hands to ace tourism offerings