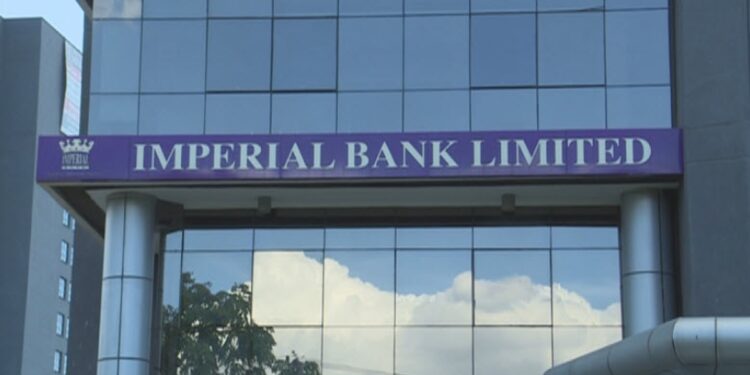 Central Bank of Kenya has finally closed the curtain on Imperial Bank, five years after placing it under receivership. Photo: Courtesy.

CBK said liquidation was the only feasible option, adding that it was acting in the interest of the general public

by Wanjiku Njugunah
in Banking, Business, Kenya
0
Share on FacebookShare on LinkedIn

Kenya’s Central Bank has approved the complete shutting down of a bank that was placed under receivership five years ago.

On Thursday, December 6, Central Bank distributed a press release informing the general public that it was closing down Imperial Bank of Kenya Limited in Receivership (IBLIR) bank, seeing that it was the only feasible option.

The liquidation of Imperial Bank now sets the stage for the sale of its remaining assets.

After the bank went under, Central Bank placed it under the receivership of Kenya Deposit Insurance Corporation (KDIC, a move the banks’ regulator says was to be done in the interest of the bank’s depositors, creditors and members of the public.

It also went under with billions of money belonging to depositors, bondholders and creditors.

During the period in receivership, Imperial Bank has since sole some of its assets and liabilities to players among them Kenya Commercial Bank to a tune of KSh 3.2 billion.

Commenting on the matter, CBK said that the process followed a transparent Expression of Interest process.

“From June 2, 2020, IBLIR depositors were to be paid a total of KSh 3.2 billion over a period of four years. Subsequently, the depositors would have cumulatively recovered 37.3 per cent of the deposits since 2015 when payments were commenced. Following four payment disbursements, 45,700 out of the 50,000 (92 per cent) depositors have accessed their funds in full,” CBK said.

Following the acquisition of certain assets and assumption of liabilities by KCB, CBK required KDIC to appoint an independent external auditor, to carry out a comprehensive audit of IBLIR, based on terms of reference approved by CBK pursuant to Section 24 of the Banking Act.

The objectives of the audit were interalia to provide an additional basis for further action. KDIC contracted an independent external auditor in May 2021.

“On December 7, 2021, KDIC submitted the Receivership Report to CBK recommending that IBLIR be liquidated. The report indicates that considering the weak status of IBLIR’s financial position, liquidation is the only feasible option,” CBK said.

CBK added that it assessed the recommendation by KDIC, the external auditor’s report, other pertinent information, and considered that liquidation would facilitate the orderly resolution of IBLIR in accordance with the Laws of Kenya, to protect the interest of IBLIR depositors, its creditors, and the wider public interest.

“CBK appointed the KDIC as liquidator of IBLIR in terms of Sections 53(2) and 54(1) (a) of the Kenya Deposit Insurance Act, 2012. 2 8. KDIC will release information about the liquidation of IBLIR and payment of depositors in due course.”

Imperial Bank was placed under receivership in October 2015, after CBK discovered massive fraud committed by its leadership through illegal deals, milking the bank at least KSh 34 billion.

As reported by The Exchange previously, executives of the collapsed bank colluded with a global network of shadowy companies led by W.E. Tilley to defraud the lender.

Forensic audit firm FTI Consulting said in July 2016 in a report dated February 9 2016 that the multi-billion shilling fraud was mainly perpetrated through non-payment of loans and withdrawal of funds in excess of account balances.

The report said W.E. Tilley was at the centre of the fraudulent transactions and was aided by former Imperial Bank’s managing director, the late Abdulmalek Janmohamed and the bank’s former head of credit, Naeem Shah.

Imperial had estimated the loss from the scheme at Sh34.4 billion, but FTI has revised the net exposure from the scam to Sh28.8 billion comprising net outflows of Sh5.6 billion and defaults on interest and other charges amounting to Sh23.2 billion as of 2015.

“The exposure relates primarily to withdrawals made in excess of available funds and the accrued interest and is recorded in the form of loans created for the purpose of clearing the excessive withdrawals and the overdraft balance outstanding as at the date the receiver-manager was appointed to Imperial Bank,” FTI said in a report.

On a weekly basis, W.E. Tilley would approach Janmohamed to advise him of the fish processing firm’s likely expenditure over the coming week.

The former CEO would write out a handwritten chit to Shah, advising him of the credit to be extended to W.E. Tilley for the forthcoming week.

Withdrawals would then be made from the W.E. Tilley’s Shilling account in excess of available funds, leading to the accumulation of interest on the overdrafts that were not paid.

The overdrawn balance was either concealed by forwarding dating of transactions and/or converting the accumulated debts into a loan or credit transfer from other Imperial Bank accounts.

The Shilling account was fed by a dollar account that received cash from foreign companies, some of which are in the fish/food business and others whose business models are yet to be identified.

Christmas vacations in Kenya on a budget: 8 Suggestions