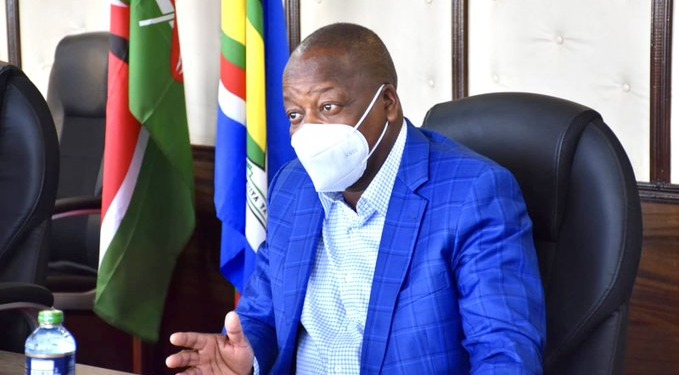 Kenya is seeking progressive partnerships as it seeks to adopt new technologies aimed at improving healthcare delivery in the country.

This is according to Health Cabinet Secretary Mutahi Kagwe who said the country is engaging its partners as part of ongoing efforts to develop comprehensive strategies to deal with emerging health challenges.

He made the remarks while he spoke to former British Prime Minister Tony Blair on the sidelines of the second edition of the European Corporate Council on Africa and the Middle East on November 5.

“Kenya has been prioritizing modernizing its healthcare systems as well as upscaling training of speciality health professionals through formalized government arrangements,” said the Health CS.

During the meeting, Kagwe sought the support of the former British Prime Minister in helping the country reach out to more partners to further enhance its capacity as well as implement ongoing reforms within the health sector.

“We have initiated targeted reforms including boosting the ICT department which is now key in our efforts to improve service delivery” Observed the CS.

Blair pledged to support Kenya’s health agenda including expanding internet connectivity among rural communities through his foundation as well as global contacts.

The former Premier said he will reach out to Oracle’s global business unit’s executive vice president Mike Sicilia, over a plan by the health ministry to integrate its IT systems.

Blair also promised to support the push for universal access to covid-19 vaccines as well as global recognition of all vaccines endorsed for use by the World Health Organization.

Kagwe’s push comes at a time when the Kenyan government has channelled strategic financial investments to the health sector geared towards strengthening health systems both at national and county levels to accelerate the attainment of Universal Health Coverage.

“There is also a concerted effort to bridge the gap in human resources with the recruitment of an additional 2, 177 Interns under the youth empowerment programme and 8,229 contractual staff who were distributed across all the 47 counties,” the PS said.

She spoke at Gatundu Level Four Hospital during the facility tour by French Minister for Foreign Trade and Economic Attractiveness Franck Riester.

The PS also informed of the ongoing provision of the additional physical infrastructure to health facilities by connecting them to water, electricity, internet and access roads.

“We are also establishing government-led digitization of health records and information systems for telemedicine, we look forward to having Kenya and France clinical focus groups through the Telemedicine platforms.

France has partnered with the Government under France-Kenya Emergency Response to Fight COVID-19 Pandemic project valued at about KSh 2 Billion (Euros 15,510,493,) that was signed in December 2020 to strengthen the capacity for twenty County facilities. Gatundu Level Five Hospital is set to benefit from equipment support amounting to approximately KSh 90 million.

In a separate story, a new report by World Health Organization shows that just five African countries, less than 10% of Africa’s 54 nations, are projected to hit the year-end target of fully vaccinating 40% of their people unless efforts to accelerate the pace take off.

This comes as the Region grapples to meet the rising demand for essential vaccination commodities, such as syringes.

Three African countries, Seychelles, Mauritius and Morocco, have already met the goal that was set in May by the World Health Assembly, the world’s highest health policy-setting body. At the current pace, just two more countries, Tunisia and Cabo Verde will also hit the target.

In addition, limited access to crucial commodities such as syringes may slow the rollout of COVID-19 vaccines in Africa. UNICEF has reported an imminent shortfall of up to 2.2 billion auto-disable syringes for COVID-19 vaccination and routine immunization in 2022.

East African businesses position themselves for intra-regional trade under AfCFTA