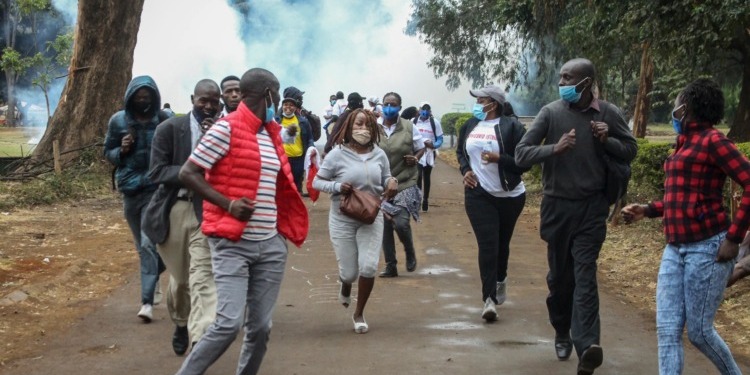 Kenyans flee from police lobbing tear gas canisters during a Covid-19 corruption protest. With the general election just months away, the economy may not fully recover from the effects of the pandemic. [Photo/AP]

A pandemic and an election: Kenya’s double edge sword

Kenya is one of the fastest-growing economies in Sub-Saharan Africa.

by Njenga Hakeenah
in Business, Kenya
0
Share on FacebookShare on LinkedIn

Between 2015 and 2019, Kenya’s economic growth averaged 5.7 per cent which ranked it as one of the fastest-growing economies in Sub-Saharan Africa.

The performance of the economy, according to World Bank, was boosted by a stable macroeconomic environment, positive investor confidence and a resilient services sector.

When the Covid-19 pandemic hit, the East African nation’s economy was badly affected due to the supply and demand shocks on both the external and domestic fronts. Economic activity sharply slowed in 2020 with the real gross domestic product estimated to have contracted by 0.3 per cent in that year.

Despite this, the agricultural sector saw output grow robustly. On the other hand, manufacturing and many other services subsectors like tourism and education were severely disrupted.

While the pandemic was a global phenomenon, one of Kenya’s biggest challenges for businesses is the general election which happens every five years.

Kenya’s has largely had polarized elections are driven by many factors but the biggest culprits are politicians who drive their agenda based on their tribal affiliations. As such, many elections are held under tense moments and in effect, they affect economic activities as businesses slow down or close down entirely until the election results are announced.

Unfortunately, like happened in 1992 and 2007, the announcement of election results did not see the end of the electioneering but the beginning of anarchy. This led the country on a downward spiral. But no election event has been as bad as the 2007 one when Kenya erupted in chaos descending into an unprecedented steep.

The country basically shut down and the economy was on its knees.

Since 2002, during President Mwai Kibaki’s five-year term which ended in 2007, the Kenyan economy was going through a phase of growth. This growth was noticeable in both industries and tourism. At this time, the recovery attracted the attention of the likes of the International Monetary Fund (IMF) and the World Bank.

Interestingly, the Kibaki government was not keen on funding from the Bretton Woods institutions and it largely financed its budget from the revenues it raised. This was unheard of in the previous regime where President Daniel Moi, Kibaki’s predecessor had wrecked the economy and had deeply entrenched corruption which saw the country’s economy almost collapse.

On the eve of the 2007 elections, the Kenyan economy was among the best performing in the region which was plagued by armed conflicts in Ethiopia, Uganda, Somalia and Sudan. But once suffrage happened, Kenya’s economic outlook changed.

Kenya now joined a league of its neighbours who had experienced political instability leading to chaotic and sporadic economic development.

The 2007 political crisis led to the closure of factories which led to the accumulation of delays in supplies affecting entire value chains. The worst-hit was the tourism sector which saw cancellation after cancellation which saw some tour operators wind up. The sector took several years to bounce back and many companies had already been affected beyond recovery. Hundreds of thousands of jobs were lost since the tourism sector supports many other sectors of the Kenyan economy.

With the collapse of the stock market, the stage was set for the impoverishment of the country. As the economic hub of the region due to its geographical location, the gateway for supplies to many landlocked countries in East and Central Africa were also affected.

The result was that the stability which the country enjoyed and which worked well in attracting investors was weathered. The political crisis in Kenya had morphed the country’s image from one of stability to one of chaos and unreliability. The economic consequences, in the short-term and the long term, could not be ignored both for the country and its neighbours.

Read: How Africa’s economy will transform this decade

As the gateway into Africa, Kenya is and has been a preferred place with several businesses to invest in. with such a profile, the country’s various opportunities have remained some of the best ways to invest money to make money in Africa.

Since Kibaki took over in 2002 succeeding Moi, the East African nation enjoyed real economic improvement with economic indicators remaining positive for the term. With these indicators, the nation’s economic future was strengthened establishing its position as a regional leader.

For almost a decade, Kenya diversified its industrial foundation under Kibaki and improved the logistical distribution especially seaport and airport which eased the penetration of goods and services within East Africa.

With the general election barely a year away, the country is again in the throes of fear since all indicators show that the 2022 general election will be highly contested and polarised. Already, political rhetoric shows that the economy may not recover from the effects of the pandemic. The challenges to businesses now are compounded by the political heat which has pitted the president against his deputy.

The chasm between the two is threatening an already fragile country not only economically but also political stability. The result is that investors will flee and businesses will close down if the chaotic political discourse is not tamed.

In February 2016, Dr Mukhisa Kituyi, the then Secretary-General of the United Nations Conference on Trade and Development (UNCTAD), decried the effects of political campaigns on Kenya’s economy. He called on Kenyans to focus more on growing the economy rather than the political bickering which he said led to the country registering a decline in its economy.

The country, which is referred to as East Africa’s investment hub is staring at eroding all the gains made during the Kibaki tenure and Kenyatta’s first term.

From an economic point of view, the Kibaki government achievements stand as a positive reference for the country which resumed a path of growth that was more in conformity with a Developing Country (DC). The growth rates at the time were above 5 per cent.

This growth sharply contrasted with the end of Daniel Moi’s rule when rates revolved around zero per cent.

Having achieved a constant increase in the standard of living indicator where the GDP per capita in parity with the purchasing power increased from US$1,250 in 2001 to US$1,786 in 2006, Kenya became an example for other African countries.

What remains to be seen now is if President Kenyatta will be able to steer this economy into stability for his predecessor or if he will leave a wrecked country that cannot be at peace with itself.

Whichever the case, the odds for Kenya’s prosperity remain stacked in its favour since Kenyans are a resilient lot. Politics is the only sour grape every five years.