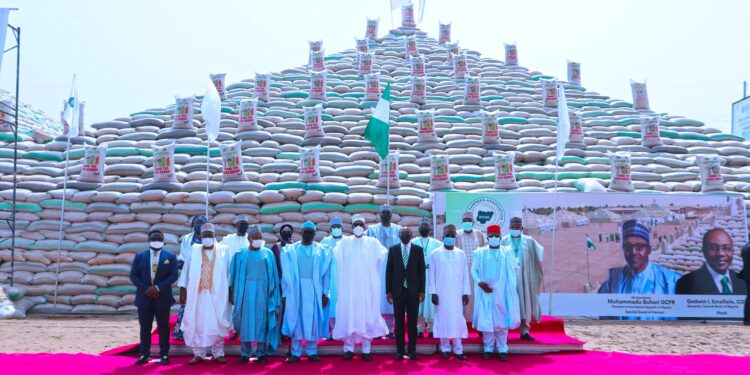 From a report by LEADERSHIP, the President unveiled 13 million bags of rice (13 pyramids) in an event that state governors and business operators attended.

The President is pushing for Nigerians to consume locally-produced foods to discourage importation, grow the economy and the living standards of farmers, and ease the pressure on the naira.

Economists say that the federal government implements the protectionism policy as it works towards self-sufficiency in food production.

Buhari said that the rice pyramids would aid efforts to reduce the price of rice in Nigeria. He expressed his expectations for other agricultural organizations to join the Central Bank of Nigeria (CBN)-funded Anchor Borrowers’ Programme (ABP) that supports Buhari’s drive for food sufficiency.

Productivity per hectare of smallholder farmers has also increased from 2.4 metric tonnes to about five metric tonnes over the same period.

Rice productivity faced challenges of banditry and terrorism by Boko Haram and ISWAP. Some farmers lost their lives while others had difficulties accessing their farms.

The ABP is an agricultural loan scheme inaugurated in 2015 by the federal government through the central bank of Nigeria. Buhari created ABP to boost agricultural production, reduce food importation, and stabilize the negative trade balance in the country.

Moreover, Buhari described ABP as a critical policy of the government to uplift the economy, create employment, conserve foreign exchange, and reduce reliance on imported food and industrial raw materials.

“Today, rice production in Nigeria has increased to over 7.5 metric tonnes annually,” he said on January 19.

Godwin said that unveiling the mega rice pyramids was among the many achievements of ABP. He further commended the President for his “vision of making agriculture a cornerstone.”

The acting managing director of the Bank of Agriculture (BOA), Alwa Hassan, disclosed that ABP was facing a challenge in debt repayment from the farmers.

Hassan further warned that the continued implementation of the scheme would prove to be a challenge to the bank if the delay of payment persisted. He noted that insecurity, armed robbery, and the kidnappings going on in the country have made it an uphill task for farmers to concentrate on their farms.

“Natural disasters with cases of farm loss due to flooding, early cessation of rain, and drought also pose serious challenges to the scheme,” he added.

The CBN governor also praised stakeholders and smallholder farmers in the rice production centre for their hard work and resilience.

Cocoa farmers in Nigeria, despite being the third biggest producers in Africa, are working towards increasing cocoa output. Their hope is to surpass the giant producers Ivory Coast and Ghana by 2027.

The association’s President, Adeola Adegoke, said this would be accomplished by the safe use of pesticides, prevention of deforestation, child labour free farming, putting traceability in place, having a sustainable ecosystem, and producing good quality cocoa.

According to the 2021 World Population Review, Ivory Coast tops production of cocoa beans in Africa at 2,034,000 metric tonnes, followed by Ghana with 883,652 metric tonnes. Nigeria’s output stood at 328,263 metric tonnes.

Read: Will Ghana’s stance on value addition resonate in Africa?