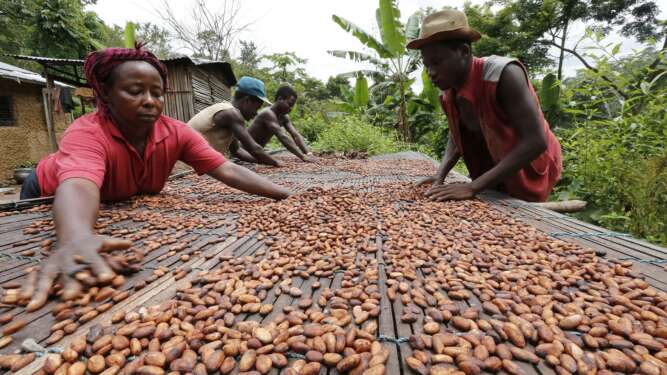 Drying cocoa beans. Ghana President Nana Akufo-Addo says that the country no longer wants to be dependent on the production and export of raw materials including cocoa beans. [Photo/FT]

On January 7, 2021, Ghana President Nana Akufo-Addo was sworn in for his second term.

A year earlier, the president took a stand for his country saying that the West African nation would no longer be importing raw cocoa beans to Switzerland saying that Ghana, which is among the top two cocoa producers in the world would go the manufacturing way so that it could add value to its cocoa and increase revenues from its produce.

Ghana is currently Switzerland’s largest trading partner in sub-Saharan Africa largely from the export of gold and cocoa to the European nation and the import of chemical and pharmaceutical products as well as light machinery and military equipment from Switzerland.

The Ghanaian president says that the country no longer wants to be dependent on the production and export of raw materials including cocoa beans.

During a press conference with the President of the Swiss Confederation, Simonetta Sommaruga, in February last year, Akufo-Addo said, “We intend to process more and more of our cocoa in our country with the aim of producing more chocolate ourselves because we believe that there can be no future prosperity for the Ghanaian people in the short, medium or long term if we continue to maintain economic structures that are dependent on the production and export of raw materials.”

On the other hand, Switzerland exported a total of US$72.2 million worth of goods to Ghana.

The president said that his government intends to add value to the country’s raw materials, industrialize and enhance agricultural productivity as this is the best way to put Ghana at the high end of the value chain in the global marketplace and create jobs for the Ghanaian masses.

Ghana is also putting in place a number of measures aimed at attracting investment and stimulating the growth of the private sector and over the last three years has succeeded in ensuring that all its macroeconomic indices are pointing in the right direction. The country is cutting its fiscal deficit, introducing a monetary policy that is stabilizing the currency and significantly reducing the cost of borrowing.

The country’s introduction of a raft of tax cuts, which are bringing relief to and encouraging businesses, is leading to Ghana recording an annual GDP average growth rate of 7 per cent since 2017. The growth makes the economy consistently one of the world’s fastest-growing. It is during this period that the country has become one of the most business-friendly economies in Africa as evidenced in the country’s status as the largest recipient of foreign direct investment in West Africa.

With the coming of the African Continental Free Trade Area (AfCFTA), Ghana has also been selected to host the secretariat of the 1.2 billion people market which has a combined GDP of US$ 3 trillion.

The AfCFTA is the world’s largest free trade area since the formation of the World Trade Organization (WTO) and Akufo-Addo says that his goal is to make Ghana the trade hub in Africa.

Going back to cocoa production, Ghana is estimated to have produced about 812 thousand tonnes of cocoa beans in 2018/2019 which was notable decrease from the approximately 969 thousand tonnes produced in 2016/2017.

While cocoa beans are originally from South America, Africa is the majority cocoa bean producer with a combined production of around 3.5 million tonnes in 2017/2018.

The two, Africa’s cocoa bean production amounted to. Côte d’Ivoire and Ghana are the top two cocoa beans producers with Côte d’Ivoire taking the mantle since it produces more than twice the volume of the cocoa beans Ghana produces.

In the 2017/2018 fiscal year, Côte d’Ivoire and the Netherlands were the two biggest processors of cocoa beans.

Globally, up to 50 million people around the world, including around five million smallholder farmers, depend on cocoa which is essential to their livelihoods.

Following the pricing mechanism by Côte d’Ivoire’s Coffee and Cocoa Board (CCC) and the Ghana Cocoa Board (COCOBOD), the global prices were negatively impacted and the two countries successfully managed to have the chocolate traders and makers agree to the idea of the US$400 a tonne premium on all cocoa sales contracts in less than a month.

The pricing mechanism was imposed to help producers earn a living wage and the suspension of forward sales of cocoa beans until the prices were agreed to have proven to be a success.

With President Akufo-Addo’s stand and approach to empowering Ghanaians, will this reverberate across Africa and enable the empowering of the world’s youngest continent?