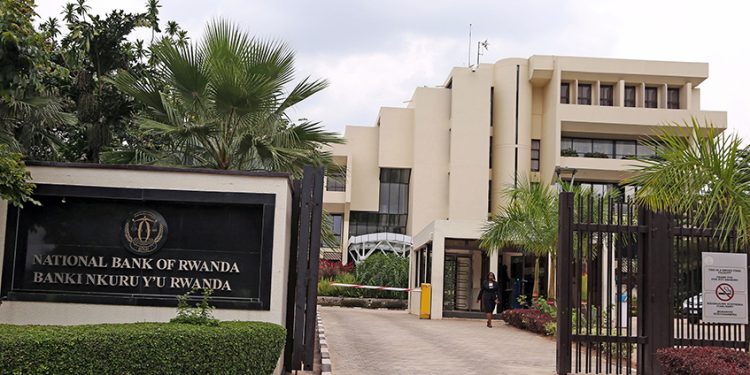 Central Bank of Rwanda head office in the capital Kigali.

In June last year, Rwanda’s central bank started a study to look into the implications of CBDC on the economy, financial sector, its technological aspect as well as an operational model in Rwanda’s local context.

by Pierre Afadhali
in Business
0
Share on FacebookShare on LinkedIn

Rwanda will make a decision on the adoption of a regulated digital currency by the end of the year 2022, according to the Central Bank of Rwanda Deputy Governor Soraya Hakuziyaremye.

The project to study the adoption of the Central Bank Digital Currency (CBDC), a currency that would be managed and issued by the central bank was announced last year as a number of countries were looking into the use of new electronic currency regulated by central banks.

In June last year, Rwanda’s central bank started a study to look into the implications of CBDC on the economy, financial sector, its technological aspect as well as an operational model in Rwanda’s local context.

Hakuziyaremye says the research project will be concluded by end of December this year, adding that Kigali will have a clear policy whether it will adopt the CBDC or not. The study is now at the stage of assessing potential risks and benefits.

“We are now at an investigation phase. We are analysing what could be the benefits to Rwandans to have CBDC but also the risk not only to our economy but the sector depending on the form of digital currency we would issue,” Hakuziyaremye said.

In October 2021 Nigeria became the first country in Africa and of among few in the world to issue a digital currency that was dubbed ‘eNaira’.

Maurice Muhiza Rwamigabo, Head of Exploration & Coordinator at the Accelerator Lab (an innovation and technology lab) of the United Nations Development Programme (UNDP) in Rwanda, said in an opinion article titled ‘Should Rwanda adopt a national digital currency?’ that if Rwanda wants to restructure its financial system and position itself as an important player in the future global economy, it should systematically assess and take the steps needed to develop its own Central Bank Digital CBDC.

“A CBDC would offer Rwandans a safe, free, and easy alternative to cash. It would expand financial inclusion by enabling more of the unbanked population to participate in the formal economy,” explained Rwamigabo.

According to Rwamigabo, amid the growing global use of cryptocurrencies, the CBCD would enable the government of Rwanda and private companies to participate in international trade, buying and selling of digital assets more seamlessly.

However, the digital currency issued by central banks is new to many Rwandans, said the head of UNDP Rwanda accelerator Lab, adding it is “irrelevant as a Rwandan franc was to a 19th-century sheepherder,” Rwamigabo stated authorities will have to educate the public about CBCD.

Meanwhile, Rwanda financial regulators are looking into how the CDBC could boost financial inclusion.

“What is important is to look at financial inclusion because if you issue a digital currency, you shouldn’t be excluding your population, it has to go with closing the digital divide and making sure that people have the option to use it,”  Hakuziyaremye further explained in a recent interview.

CBDCs are issued and regulated by the nation’s monetary authorities, or central bank, and backed by the governments. Rwanda’s central bank is leading the project that it will conclude by December.

According to experts, a CBDC is not a cryptocurrency.

Cryptocurrencies, such as Bitcoin, are not currencies in most countries because they are not a generally accepted form of payment, and are not regulated by the central bank. They are still widely referred to as cryptocurrencies, but experts say they are best described as digital assets or crypto-assets.

Rwamigabo further suggested that the government must ensure that the Rwandan people understand digital currency, are involved in the formulation of digital currency policy and have full access to the digital technology necessary for using a CBDC

Some observers believe that a well regulated CBDC will increase innovation in Rwanda. Olivier Mugabonake, the Chairperson of Rwanda Fintech Network noted that many companies are ready to adopt digital currency.

“I understand the regulator needs to assess wisely and make sure it is adopted in a secured manner,” said Mugabonake.

Many people in Rwanda are adopting cryptocurrencies that are growing around the world, but the deputy director of the central bank urged people to be vigilant while trading in popular digital currencies as there are some risks associated with them.

According to Nigeria’s eNaira website, it took the Central Bank of Nigeria several years of research in advance the boundaries of the payments system in order to make financial transactions easier and seamless for every stratum of the society.

Monetary authorities also had a series of engagements with relevant stakeholders including the banking community, fintech operators, merchants and cross-section of Nigerians, to design the digital currency.