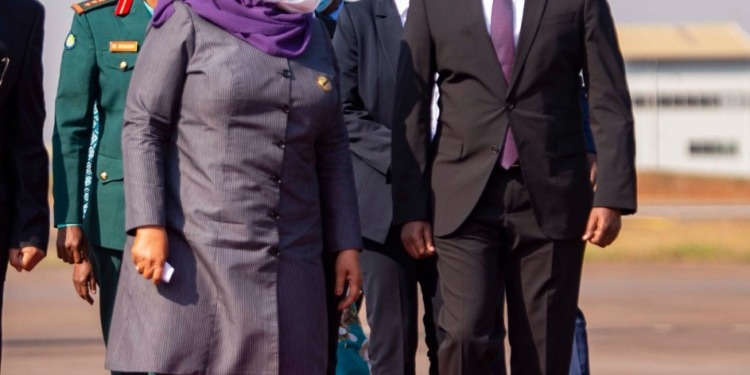 by Padili Mikomangwa
in Business, Countries, Industry and Trade
0
Share on FacebookShare on LinkedIn

Rwanda and Tanzania have moved a step closer to harmonising how they work together following the meeting between President Samia Suluhu and her Rwandan counterpart Paul Kagame.

The two countries have signed several bilateral agreements on the first day of the Tanzanian President’s official two-day visit to Kigali. Suluhu and Kagame who were accompanied by their respective ministers of ICT and Communication witnessed the signing of the agreements among which were one on cooperation in communication and ICT sectors.

President Suluhu’s trip marks another vital movement made by the two countries after the late John Magufuli opened a new door of diplomacy between the two African nations.

As the two countries keep pressing different economic plans, the visit ushers in crucial business opportunities as the business community listed seven priorities, they “would focus on in bilateral talks between Tanzania and Rwanda that could boost the intra-trade between the two” according to information from The Citizen.

The key issues to be dealt with from the start from stabilizing economic relations: clearing out the Non-Tariff Barriers (NTBs), and payment of unpaid transactions that Rwandan importers owe clearing and forwarding agents and transporters in Tanzania, according to The Citizen.

The two countries relationship was brought back with a kick by Magufuli’s administration, especially the opening of the Rusumo One-Stop-Border Post and International Bridge to facilitate business and travel.

Further down that line, the issues raised by the community also bring in freedom of movement of people, building a transport and logistics hub in Dar es Salaam, reviewing the East African Community (EAC) nuisance tax laws, and exploring investment opportunities in both countries (The Citizen).

In January 2018 the two countries made a historic agreement to collaborate on the standard gauge railway (SGR) stretching from Isaka and Kigali. More to the relations is that the two East African nations have been recording rather significant trade relations that accelerated investments between the two countries (United Nations COMTRADE database).

According to the latest publication by The Citizen, the statement signed by the director of Presidential Communications, Mr Jaffar Haniu, while in Rwanda, the Tanzanian President will hold talks with her Rwandan counterpart, President Paul Kagame, and rather cement bilateral ties adding up the list of agenda.

There are several important aspects expected by the two-day visit as highlighted by the Tanzania Freight Forwarders Association (Taffa) president Edward Urio, including sparking dialogue on strategies to ensure the Rwandans have a good flow of their shipments through the Dar es Salaam Port to stabilize the economic relations between the two countries, and also deal with the NTBs at the Dar es Salaam Port-Rwanda transport corridor.

According to the Taffa chief, Rwanda is the second contributor (by 30 to 35 per cent) after DRC in terms of cargo passing through Tanzania’s main port (Dar es Salaam).

Further, the Taffa chief highlighted on the two heads of state to attend on the $2.6 million outstanding payments that Rwandan importers have been owing Tanzania’s transporters and clearing and forwarding agents for some years now, according to The Citizen.

On the other side of the fence, Francis Nanai, executive director of Tanzania Private Sector Foundation, noted that “this is an opportunity to improve trade through Dar es Salaam Port. We can use our geographical and distance advantage to make Rwanda use Dar Port instead of Mombasa in Kenya,”

The executive also brought up two critical issues, the need for constructing a transport and logistical hub in Dar es Salaam so that the Rwandans could import from Dar es Salaam instead of India, Japan and China, and also ushering the flexibility at border crossings to allow smooth movement of labour and capital, which builds a strong trade relationship between countries.

Tanzania has catered different products to Rwanda since 2019, including minerals such as salt, sulphur, earth stone, plaster, lime and cement. Food products such as cereals, edible vegetables, roots and tubers.