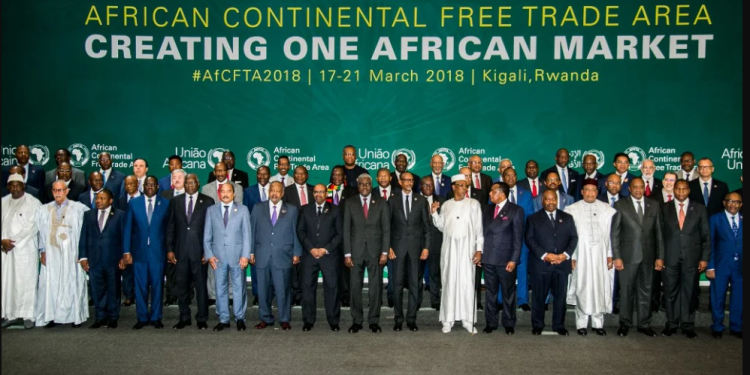 African heads of state and government at the African Union Summit that saw the signing of the African Continental Free Trade Agreement in Kigali, Rwanda, on March 21, 2018. (Photo: STR / AFP)

West Africa: Economic sectors to benefit most from the AfCFTA

AfCFTA treaty aims to simplify and harmonize international trade procedures and logistics to expedite the processes of importation, exportation and transit; and expedite the movement, clearance and release of goods including goods in transit across borders within State Parties.

by Rose Kwamboka
in Business
0
Share on FacebookShare on LinkedIn

According to the 2020 report by the World Bank on Making the Most of the African Continental Free Trade Area: Leveraging Trade and Foreign Direct Investment to Boost Growth and Reduce Poverty, AfCFTA will cover 55 member countries, with a continental population of 1.3 billion people and a combined annual GDP of $3.4 trillion. When fully implemented, it is estimated the agreement could boost the region’s income by $450 billion annually and provide new opportunities, including trade, agriculture, manufacturing, e-commerce, cultural and transport sectors.

In particular, Annex 4 to the AfCFTA treaty aims to simplify and harmonize international trade procedures and logistics to expedite the processes of importation, exportation and transit; and expedite the movement, clearance and release of goods, including goods in transit across borders within State Parties.

This simplification is important for Africa to maximize potential gains from the AfCFTA, which is made clear by looking at the high trade costs of crossing borders on the continent.

As the map below illustrates, many African countries have borders ranking at the top of the most restrictive in the world as measured by the costs of cross-border trade. 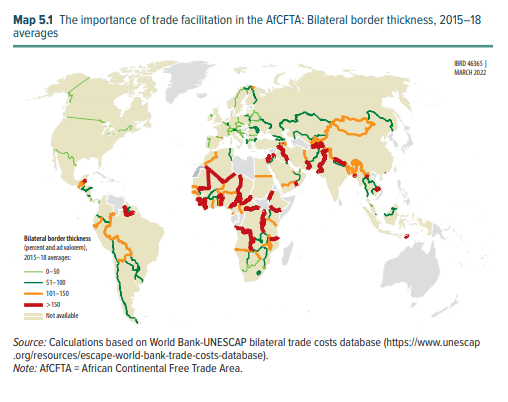 For historic reasons, bilateral and regional trade in Africa has been hampered by trade routes designed for export away from the continent rather than for facilitating intra-Africa trade. Obstacles include long distances, inadequate transport services, and inefficient institutional and transit regimes.

In many landlocked African countries, economic centres are located several hundred kilometres away from the closest seaport. Overcoming geographic constraints or the lack of economies of scale caused by small transportation volumes is key for all countries, particularly transit countries. A renewed focus on the efficiency of transport and logistics services is long overdue, given that many countries retain policies that favour closed, small, and inefficient services markets.

By committing to no new barriers to services trade during the progressive liberalization process, at least in the five priority sectors—business, communication, financial, transport, and tourism services, and with declining trade costs—the transport sector is bound to expand.

E-commerce – the production, distribution, marketing, sale or delivery of goods and services and data flows by electronic means – is another promising area for Africa, particularly given the COVID-19 (coronavirus) pandemic.

Following the outbreak of the pandemic, e-commerce in Africa has grown significantly with increased reliance on e-commerce channels in a range of sectors.

The report states that the average share in all online sales since COVID-19 is 43 per cent, up from 31 per cent in 2019. Some firms report diversification into new markets through e-commerce during the pandemic.

This presents a unique opportunity for African countries to collectively establish common positions, ensure that digital economy regulations converge, and leverage the benefits of this type of commerce for development.

Small and medium enterprises make up more than 90 per cent of the firms in Africa’s private sector. Many tend to focus exclusively on domestic markets, and this does not include the many informal firms.

This highlights the critical importance of focused, pragmatic, and effective assistance for these types of firms. The AfCFTA can help businesses gradually enter export markets, either directly by becoming exporters or indirectly by supplying African firms already involved in cross-border trade and investment. This is one of the reasons why AfCFTA signatories should be preparing an AfCFTA domestic complementary agenda. Governments and the private sector can clear bottlenecks preventing these types of businesses from expanding into the continental African market.

It is not only industries such as transport, though, that will also stand to benefit. The services industry is bound to benefit too. Given that the lion’s share of Foreign Direct Investment (FDI) worldwide is concentrated in the services sectors, eliminating barriers to trade in services also leads to dismantling barriers to FDI.

Additionally, in East Africa, where agriculture and construction expand the most, and in southern Africa, where growth is mainly in manufacturing and in construction, unskilled workers’ wages will grow concomitantly.

The trickle-down effect of implementing the AfCFTA is alleviating poverty.

The number of people living in extreme poverty in Africa increased significantly. Measured with a poverty line of US$1.90 per day in purchasing power parity terms, Africa’s extreme poverty headcount ratio was 40.2 per cent in 2010 and declined to 34.1 per cent by 2019.

Considering the increase in the size of the population, the number of people living in extreme poverty on the continent increased from 408 million to 442 million between 2010 to 2019.

As a result of the economic and health consequences of the COVID-19 pandemic, it is projected that 27 million more people were pushed into extreme poverty on the continent respect to 2019 and nearly 51 million with respect to a situation without COVID-19 in 2020.

The simulations under the baseline scenario suggest that 317 million Africans will live in extreme poverty by 2035. Assuming a sustained recovery in the global economy, under the baseline scenario, it is projected that the recent increase in the number of people living in extreme poverty will be reversed. The number of people living on less than $1.90 a day in purchasing power parity terms is projected to decline from 469 million in 2020 to 317 million by 2035, a net decline of 152 million.

This decline would be equivalent to a reduction from 35.3 per cent to 17.0 per cent in the poverty headcount ratio over the 15-year period, considering the size of the population of Africa.

In a post-COVID-19 world, implementation of the AfCFTA trade scenario could help lift 40 million people from extreme poverty by 2035.

Read: Could AfCFTA be the answer to Africa’s poverty struggle?

Could AfCFTA be the answer to Africa's poverty struggle?