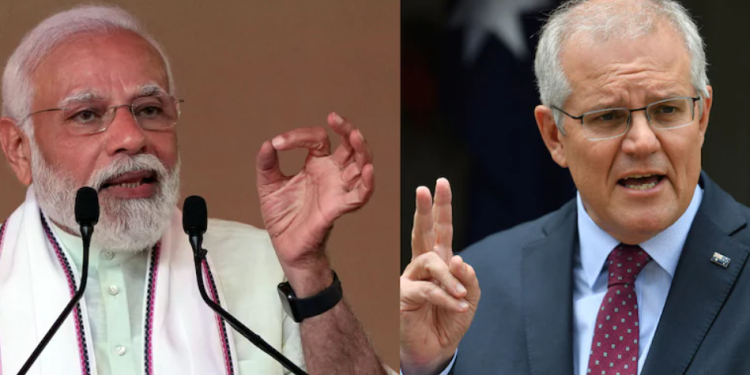 by Wanjiku Njugunah
in Business, World
0
Share on FacebookShare on LinkedIn

India has thanked Australia for returning 29 religious and cultural artefacts, including items stolen or illegally exported from the South Asia nation.

Prime Minister Narendra Modi acknowledged Australia’s move when his administration had urged Western governments and museums to identify and return the possessions of its stolen heritage.

“I would like to especially thank you for the initiative to return ancient Indian artefacts. These include statues and paintings that are hundreds of years old,” Modi said in part.

The returned artefacts, Modi said, date back to the ninth century and were held by the National Gallery of Australia.

According to several news sources, the government said hundreds of items from abroad had already been returned.

The sources indicate that among the returned artefacts were 13 items, which were connected to Subhash Kapoor, a famous, notorious Indian antique dealer.

According to News18, Modi inspected the artefacts, which included precious antiques.

The returned items include the Shiva and his Disciples, Worshipping Shakti and Lord Vishnu and his Forms.

The news portal noted that the artefacts date from as early as the ninth to the tenth century.

The artefacts are primarily made of sandstone, marble, bronze and brass.

According to the publication, the antiques are from various places In India, including Rajasthan, Gujarat, and West Bengal.

U.S. Department of Homeland Security and Indian law enforcement agents said they worked together to recover the statue, which had been looted from a temple in Southern India, sold to Christie’s Auction House in New York, and acquired by a buyer in Australia.

Christie’s Auction House and the buyer in Australia were initially unaware of the statue’s stolen origins. After being alerted by law enforcement agents, they cooperated fully with the U.S.-India law enforcement investigation to recover the stolen artefact.

During the event, Chargé d’Affaires Goldman said that the statue’s recovery represented the breadth and depth of the U.S.-India law enforcement partnership.

He added that the successful investigation showed the United States’ importance on preserving and protecting cultural heritage.

“The statue represents Hanuman, a beloved monkey deity renowned for his courage, power, and faithful, selfless service. After being returned to the Indian High Commission, the statue of Hanuman will be repatriated to India,” the embassy said.

Last November, the Diplomat reported that the United States had returned a staggering haul of 248 Indian antiquities, worth an estimated $150 million, to India.

The move followed close on the heels of President Joe Biden’s administration, handing over a cache of 157 artefacts to Prime Minister Narendra Modi during his visit to the United States in September.

The handover came after the two countries to combat theft, illicit trade, and trafficking of cultural objects.

According to the news agency, the U.S. deportation of antiques resulted from a thorough probe by the Manhattan district attorney’s office and U.S. Immigration and Customs Enforcement.

The investigation focused on tens of thousands of antiquities allegedly smuggled into the United States by notorious Indian antique dealer Kapoor.

Earlier in October 2021, America returned 248 antiquities, including a 12th-century bronze Shiva Nataraja, valued at $15 million to India, the “largest” transfer of antiquities.

Manhattan District Attorney (DA) Cy Vance, Jr, who was close to the case, observed that the extraordinary assemblage of artefacts, recovered from five different criminal investigations over the past decade, embodied the timeless cultural and cosmic bridge between ancient and modern-day India.

According to India Today, the U.S. returned the 248 antiquities valued at an estimated $15 million to India during a repatriation ceremony attended by India Consul General Randhir Jaiswal and U.S. Homeland Security Investigations (HSI) Deputy Special Agent in Charge Erik Rosenblatt.