In its African Economic Outlook 2021 report, African Development Bank said that the most affected people are those with lower levels of education, working in informal jobs and those with fewer assets.

According to the report, in order to lift the newly extreme poor to the $1.90 per day poverty line, the monetary cost is estimated at $4.5 billion in 2021 which is about $90.7 million on average per country.

The report noted that women and households headed by females could represent a large proportion of the newly poor. It also said that inequality will increase to the vulnerable groups such as women, youths and low skilled informal workers as they often work in contact intensive sectors with few opportunities to work while observing social distance or working from home.

Despite the lockdown measures helping to curb the spread of the virus in some countries, its effect has led to severe economic contraction as informal employment dominates in Africa. 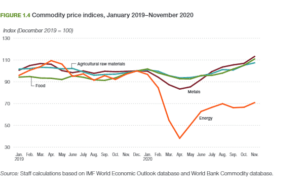 In 2021, Africa’s real GDP is expected to grow by 3.4 per cent after contracting by 2.1 per cent in 2020. According to the report, the resumption of tourism, the abolishment of restrictions put in place to curb the pandemic and the rebound in commodity prices will highly determine the recession of economies as the outlook is subject to great uncertainty from both domestic and external risks.

The report noted that the factors that could hinder the recovery in 2021 as low commodity prices, debt overhang, the resurgence of covid-19 infections, financial market volatility that hinders capital flows, social tensions, low tourism and remittances and extreme weather events.

According to the report, full implementation of the Africa Continental Free Trade Agreement, effective deployment of therapeutics and vaccines for COVID–19, continued progress in structural transformation like digitization and working from home are the factors that could result in better than expected growth for Africa.

In 2020, although the average headline inflation was held stable at 10.4 per cent by counterbalancing forces, core inflation in many countries has risen. Most frontier market economies in Africa have experienced currency depreciation partly due to disruptions in external financial flows such as foreign direct investment, official development assistance, remittances and portfolio investment. 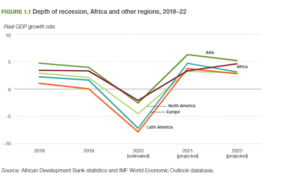 Last year also, fiscal deficits doubled to a historic high of 8.4 per cent of GDP leading to increased debt burdens although a gradual consolidation process is expected in 2021 onwards.

“Countercyclical easy monetary policy and fiscal stimulus packages are expected to support the continent’s economic recovery. Investor sentiment is still weak compared with pre-pandemic levels and the capital flight from developing countries experienced at the peak of the pandemic in March-June 2020 has been only partially reversed.” The report read in part.

The African Development Bank estimates that governments in Africa will need additional gross financing of about $154 billion in 2020/21 FY to respond to the crisis.

“Although the average debt-to-GDP ratio, a standard measure of debt sustain-ability, had stabilized around 60  percent of GDP between 2017 and 2019, it is projected to increase by 10 to 15 percentage points by 2021 as a result of  COVID–19.” The report read.

Tourism-dependent economies and other resource-intensive (non-oil) economies are expected to account for the most significant increase in Africa’s overall average debt levels.