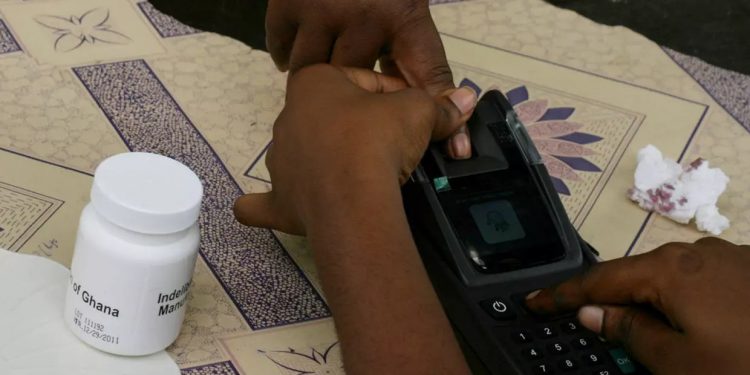 Biometric voting in Ghana. Most cards and the voting equipment are produced by Western companies and there is no telling where this data will end up. [Photo/RFI]

Africa lags behind in data, privacy protection. Who benefits?

Africa lags behind when it comes to data and privacy protection exposing the continent’s population to threats which could become expensive to them.

A report by the United Nations Conference on Trade and Development (UNCTAD) shows that 107 countries have put in place legislation to secure the protection of data and privacy. 66 of these countries are developing or transition economies.

In this area, Asia and Africa show a similar level of adoption, with less than 40 per cent of countries having a law in place.

In March this year, PwC released its 2020 Global Economic Crime and Fraud Survey: Opportunity in the face of adversity where 58 per cent of respondents in Kenya had experienced economic crimes in the past two years, down from 75 per cent in 2018, but still higher than the global average of 47 per cent.

The survey also showed that 44 per cent of companies that experienced economic crimes had between 6-10 incidents reported in the last 24 months with the top four types of economic crimes in Kenya being bribery & corruption, procurement fraud, asset misappropriation and customer fraud.

The economic losses from the economic crime experienced by surveyed organisations were estimated at KShs 5.5 billion.

Interestingly, most perpetrators of economic crimes in the last 24 months were internal actors at 36 per cent with external actors accounting for 27 per cent of the reported incidences.

“This is consistent with past surveys where the main perpetrators of economic crimes have been internal actors. We also note that one in three respondents reported being victims of collusion between the internal and external actors. It goes against what our respondents reported globally where external fraudsters were the main perpetrators of fraud,” notes the survey.

The UNCTAD survey shows that only 66% of the nations of the world safeguard people’s data and privacy, despite an 11 percentage point increase in the adoption of data protection and privacy legislation in the period 2015-2020.

“Given the rise of cybercrime, scams and online fraud during the covid-19 pandemic, the survey results are very worrying,” said Shamika N. Sirimanne, director of UNCTAD’s division on technology and logistics.

For e-commerce to effectively support development, she said, consumers and businesses must feel protected.

“This is especially true in these trying times when digital tools are increasingly the only vehicle to access goods and services.”

The survey reveals that globally, 81% of countries have an e-transaction law with Europe having the highest share at 98 per cent followed by the Americas (91%). The share is lowest in Africa at 61 per cent.

And although 79 per cent of countries have cybercrime legislation, the share again varies widely by region with Europe leading at 89 per cent while Africa trails at 72 per cent.

When it comes to consumer protection online, the global share is 56 per cent but the rate of adoption varies from 73 per cent in Europe, 72 per cent in the Americas to 46 per cent in Africa.

Concerning data and privacy, 66 per cent of countries have legislation. Again, Europe leads at 96 per cent with the Americas at 69 per cent, 57 per cent in Asia and the Pacific and 50 per cent in Africa.

Privacy International says that Africa is a testing ground for technologies produced elsewhere resulting in personal data of Africans increasingly being stored in hundreds of databases.

With data exploitation being big business, PI notes that personal information collected as part of a health survey could be repurposed for a client that is, say, a political party desperate to win an election.

This year, at least twenty countries in African will go to the polls where citizens will use biometric voting systems.

Despite the Cambridge Analytica data scandal in 2017, not much is being done to protect data on the continent. With most cards and the voting equipment being produced by Western companies, there is no telling where this data will end up after the lucrative contracts with African governments are finalised.