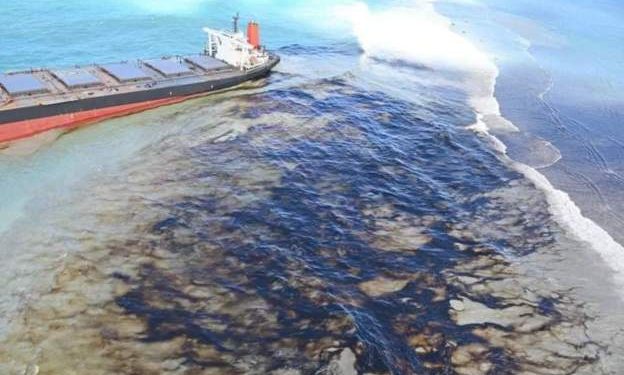 Mauritius is the latest example. Just this Saturday, a grounded oil tanker, MV Wakashio, started spewing tonnes of oil into the Indian Ocean and as the norm on the continent, the country is ill prepared to respond.

Africa needs to do a much better job in disaster preparedness. The continent cannot and must not continue to operate on status quo basis, as though no emergency is bound to occur at some point.

So, humans on the ground can take some sort of action but what of the marine life?  Most of which mark you, is endangered coral reef species.

Greenpeace says the fuel and oil leak threatens the survival of thousands of species.

Africa must invest, with aid from the international community, in disaster preparedness systems and programs. Reacting once disaster strikes dooms not only the continent but the whole world, we must prepare to respond.

Consider, the oil spilling ship at Pointe d’Esny back in late July, a month later, there is little to no response, now marine life is been destroyed, right along with the livelihoods of the surrounding communities.

Now, a month later, the government of Mauritius has declared an environmental emergency.

A little too late because it seems that the worst is yet to come as news media’s report that the Japanese-owned ship, which was carrying 4,000 tonnes of fuel, may be torn apart by bad weather.

Again, with no emergency response system in place, it is volunteers who are frantically saving ‘…dozens of baby tortoises and rare plants.’

Residents and environmentalists alike wondered why authorities did not act more quickly after the ship, the MV Wakashio, struck the reef on the southeast coast of the Indian Ocean island on July 25.

Well, do we really need to explain what it means to be ready for an emergency? Authorities in the country say it is their first oil spill, and so ‘…perhaps no one expected the ship to break apart.’

That may be the case but that is the exact same reason you prepare for such cases.

“Our country doesn’t have the skills and expertise to refloat stranded ships. I worry what could happen on Sunday when the weather deteriorates.”

As a former colony, France has responded ‘quickly’.

A military aircraft deployed pollution response equipment, interesting ‘from a neighboring island.’ A naval vessel also from the neighborhood has brought in booms and absorbents.

So, response material is available in a nearby island! What is missing is the disaster response preparedness system. And now it has taken what is been described as ‘…the most terrible ecological crises ever seen on the small island,’ for governments to act, if they will that is.

“Thousands of species around the pristine lagoons of Blue Bay, Pointe d’Esny and Mahebourg are at risk of drowning in a sea of pollution, with dire consequences for Mauritius’s economy, food security and health,” warns Greenpeace.

Also Read: Why the African free trade area could be the game-changer for the continent

Why over 7000 Kenyan Flower farmers are getting funded