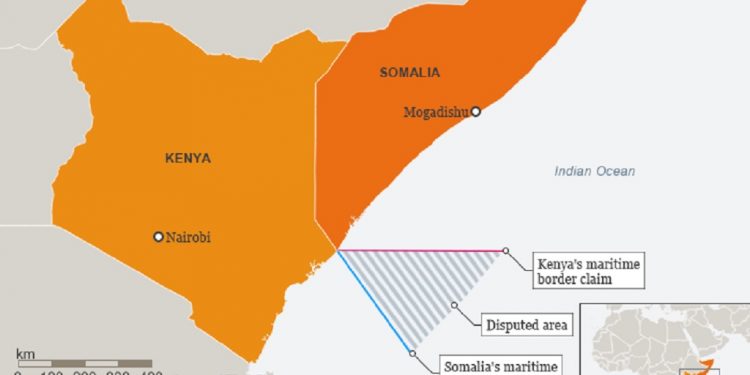 A map showing the disputed maritime border Kenya and Somalia. The Oil wealth could be pitting Somalia and Kenya against each other. [Photo/AFP/DW]

by Njenga Hakeenah
in East Africa, Extractive and Energy, Kenya, Somalia
0
Share on FacebookShare on LinkedIn

Kenya and Somalia are now in uncharted waters as a diplomatic tiff over the disputed maritime border between the two countries escalates.

To show the enormity of the matter, the Somali federal government has released circular directing government agencies, donors and UN bodies not hold meetings, seminars and conferences in Nairobi, Kenya.

In a letter addressed to UN agencies, Director-General Dr Abdullahi Hashi Ali, disclosed that Somalia dignitaries and representatives would no longer attend meetings scheduled to be held in Nairobi.

“The ministry informs all its partners that representative from the ministry will not attend all planned and upcoming meetings, workshops, seminars and training to be held in Nairobi,” reads an excerpt of the letter.

PM Ahmed said that the two neighbours committed to peace and amicably resolve the maritime dispute.

“Through the leadership of PM Abiy Ahmed, Presidents Uhuru Kenyatta and Mohammed Abdullahi met this morning to discuss extensively on the source of the two countries dispute. As an outcome both agreed to work towards peace and to take measures in addressing particular issues that escalated the tensions,” Ahmed’s office said.

The statement added: “President Farmajo (Abdullahi) and his Kenyan counterpart Uhuru Kenyatta have had a fruitful meeting at State House this morning. The main agenda for the meeting was to find a solution to diplomatic differences,” his office said.

But current developments show that the two countries are sinking deeper as their relationship deteriorates.

The Somali government letter added: “Due to the recent travel issues to Nairobi, Kenya, the ministry highly encourages those events to be held inside the country (Somalia) or be moved to alternative countries for ease of travel to ministry representatives,” a section of the disclosed.

On Friday last week, the Somali government said it was not ready to take any action that could imperil its relationship with Kenya.

The Somali government has raised concerns about what it called a Kenyan decision to deny entry visas to some lawmakers and diplomats, who had planned to attend a European Union meeting in Nairobi on Tuesday.

Kamau added that Somalia had on February 7 this year set to auction oil and gas blocks falling within the Kenyan maritime territory near its border. Somalia held the auction in London on February 7, 2019.

In defending the envoy’s recall, Kamau said, “The summons is a consequence of a most regretful and egregious decision by the government of Somalia to auction off oil and gas blocks in Kenya’s maritime territorial area.”

In a strongly worded statement, Kamau said that Kenya would do everything to preserve the integrity of it territory.

“Kenya is prepared and ready to defend its territorial integrity at any cost and considers all those directly or indirectly involved, whether Kenyan or non-Kenyan in the encroachment of Kenya’s territory as enemies of the State and as adversaries of the Kenyan people.”

The disputed maritime territory, which Macharia maintained is historically Kenyan, is rich in hydrocarbons and a case lodged at The International Court of Justice (ICJ) in The Hague is considering the claim on the boundaries.

In 2014, Somalia instituted the proceedings after negotiations over the 100,000 sq. km stretch of the Indian Ocean floor broke down.

In its lawsuit, Somalia claimed that despite the numerous meetings to discuss how to resolve the dispute, no progress was made in any of the meetings.

In the larger Eastern Africa region, states have agreed on terms to fix resolve border disputes.

Kenya is among five African countries with troops in Somalia.

The troops are fighting militant group al-Shabab under the African Union Mission in Somalia (AMISOM) with the area of operations being Central and southern Somalia.

Conversely, there are at least 300,000 Somali refugees hosted in Kenya.

The East African economic hub has been pushing for the repatriation of Somali with plans to completely shutter the Dadaab refugee camp by August 2019.

To stamp its authority, Kenya has been flexing its diplomatic muscles as it tiffs with Somalia by tactically withdrawing Kenyan security forces from areas they had liberated in Somalia.

In addition, the Uhuru Kenyatta government has withdrawn some privileges given to senior Somali government officials in a bid to push for an end to the border dispute.

Unlike its competitors, coffee sector in Kenya lacks cultural attachment