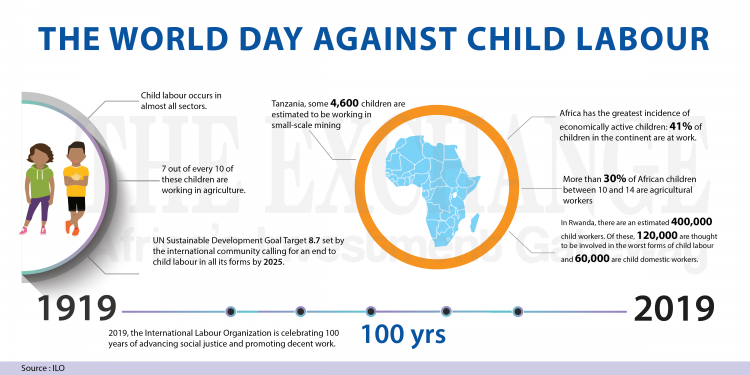 The World Day Against Child Labour- The Exchange

Worst forms of child labour include slavery, debt bondage, prostitution, pornography, forced recruitment of children for use in armed conflict, use of children in drug trafficking and other illicit activities, and all other work likely to be harmful or hazardous to the health, safety or morals of girls and boys under 18 years of age.

by Indicator
in Africa, East Africa, The Indicator
0
Share on FacebookShare on LinkedIn

June 12th is World Day Against Child Labour, the day is meant to raise awareness and activism to prevent child labour.

Child labour are all forms of work by children under the age laid down in ILO standards. Worst forms of child labour include slavery, debt bondage, prostitution, pornography, forced recruitment of children for use in armed conflict, use of children in drug trafficking and other illicit activities, and all other work likely to be harmful or hazardous to the health, safety or morals of girls and boys under 18 years of age.

The ILO has recently estimated that some 246 million children aged 5-17 years are engaged in child labour around the world. Of these, some 179 million are caught in the worst forms of child labour.

Africa has the greatest incidence of economically active children: 41 percent of children in the continent are at work. On average, more than 30% of African children between 10 and 14 are agricultural workers.

In Rwanda, there are an estimated 400,000 child workers. Of these, 120,000 are thought to be involved in the worst forms of child labour and 60,000 are child domestic workers. A recent survey by the Ministry of Public Service and Labour in Rwanda of children involved in prostitution in several large Rwandan cities found that 40% of child prostitutes had lost both of their parents, 94 per cent lived in extreme poverty and 41% had never been to school.

In Tanzania, some 4,600 children are estimated to be working in small-scale mining. In Tanzania, children as young as eight years old dig 30 metres underground in mines for eight hours a day, without proper lighting and ventilation – constantly in danger of injury or death from cave-ins.

The Government of Kenya has recently reported that 1.9 million children, between the ages of 5-17, are working children. Only 3.2 per cent of these children have attained a secondary school education and 12.7 per cent have no formal schooling at all.

During the peak coffee picking season in Kenya, it has been estimated that up to 30% of the

pickers are younger than 15. According to the Government of Zambia, there are some 595,000 child workers in Zambia. Of these, 58 per cent are 14 or younger and, thus, ineligible for any form of employment under the Employment of Young Persons Act.

It has been estimated that as many as 5 million children in Zimbabwe between the ages of five and 17 years are being forced to work in Zimbabwe. An IPEC survey of children working in small scale mines in Madagascar showed that more than half (58 per cent) were aged 12 or under, only a third had opportunities to learn skills and half came from families that were in a precarious economic situation with difficult living conditions.

Some 120,000 children under the age of 18 are thought to have been coerced into taking up arms as child soldiers, or military porters, messengers, cooks or sex slaves in Africa.  Between 10,000 and 15,000 children from Mali are working on plantations in Côte d’Ivoire. Many of them are victims of child trafficking.

It is estimated that 50,000 children are working as domestics in Morocco.

In West Africa, an estimated 35,000 children are in commercial sexual exploitation.

The ILO International Programme on the Elimination of Child Labour (IPEC) is the world’s largest technical cooperation programme on child labour. Since its inception in 1992, IPEC programmes in more than 75 countries have had considerable impact in both removing hundreds of thousands of  children from the workplace, raising general awareness of this problem and building the capacity of institutions with responsibility for child labour. In sub-Saharan Africa, 10 national programmes were launched or expanded in 2000-2001 including Ghana, Nigeria, Uganda, Zambia, Mali, Niger, Burkina Faso, Senegal, Togo and Benin. The objective of these programmes is the elimination of the worst forms of child labour, mainly in agriculture and the informal sector.

The ILO ‘s Minimum Age Convention, 1973 (No. 138) has been ratified by 116 countries. Its aim is the effective abolition of child labour in those children under the age of completion of compulsory schooling or, in any case, under the age of 15 years.

focuses on the abolition of the worst forms of child labour for children under 18 years of age.

Other relevant international standards include: The UN Convention on the Rights of the Child (CRC), outlining the economic, civil, cultural and social rights of children. Ratified by all UN member States except two, the CRC is monitored by the Committee on the Rights of the Child; and, the Optional Protocols to the CRC (2000) extending CRC obligations relating to the sale of children, child prostitution, child pornography and to the involvement of children in armed conflict.