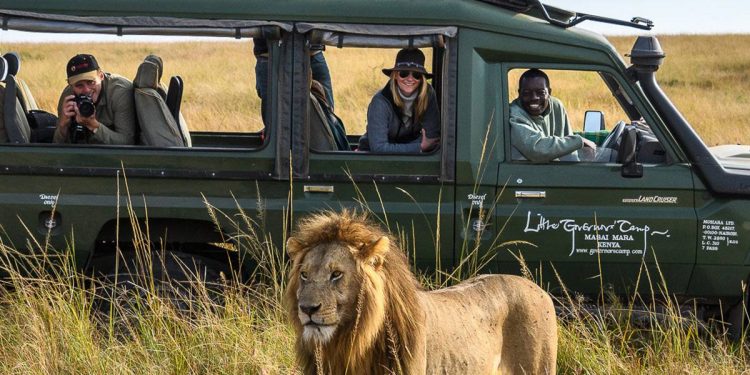 Tourists at Maasai Mara National Park in Kenya. East Africa introduced the single tourist visa in 2014 as a pilot between Kenya, Uganda, and Rwanda enabling free movement in the region. [Photo/ The Exchange]

Is East Africa making strides in the tourism promotion front?

The single tourist visa was introduced in 2014 as a pilot between Kenya, Uganda, and Rwanda.

After introducing the EAC tourist visa, East Africa has been cited as one of the most open destinations alongside South East Asia and Oceania.

This is according to the report by World Travel Tourism Council (WTTC) which also states that despite improvements, traditional visa policies remain an obstacle to both tourism and economic growth.

East Africa has made huge strides in improving the tourism sector in the bloc. So far, three countries have embraced the Single Tourist visa making it easier for the bloc to market it as a single destination as well as allowing tourists access to all three countries from one visa.

The single tourist visa was introduced in 2014 as a pilot between Kenya, Uganda, and Rwanda. Under the initiative, tourists can choose between a single-country visa or an EAC tourist visa. With the latter, they are allowed to move freely between the three countries for a period of up to 90 days.

In October 2020, the East African Legislative Assembly (EALA) released a report citing the tourism situation in the region.

The EALA noted that certain overriding challenges, including sector underfunding, insecurity, and lack of harmonized policies and laws, need to be speedily addressed to ensure that the sector thrives.

The same sentiments were echoed by the East African Community (EAC) Secretary-General Ambassador Libérat Mfumukeko, who has said the region is without a doubt on the right track with significant achievements registered in 2018 despite some challenges, especially the EAC tourist visa.

“The achievements of the EAC have earned us international recognition as the top performing REC on regional integration overall by internationally renowned institutions like the African Development Bank and the World Bank,” He said.

At the beginning of 2020, the EAC Secretariat undertook joint tourism promotion at the major international tourism trade fairs in Berlin and London to increase the visibility of EAC as a single tourist destination and to promote intra-regional tourism and enhance cooperation among tourism players within the region.

At this point, the review of Classification Criteria for Tourism Accommodation Establishments and Restaurants had already commenced in August 2018. The review aimed to take into account international tourism trends and best practices to ensure that the region enhances its competitiveness and positions itself adequately in the global tourism market. The EAC tourist visa was then marketed as a key enabler to growing tourism in the region.

“EAC tourism arrivals have increased from 3.5 million persons in 2006 to 5.7 million persons in 2017. However, this is still substantially low given that it represents only 8.6 per cent of the African market share and 0.3 per cent of the global market share. Tourism contributed to the Gross Domestic Product of the EAC Partner States by an average of 8.8 per cent in 2017. The percentage contribution was higher than the average in Rwanda (12.7 per cent), Kenya (9.7 per cent) and Tanzania (9.0 per cent). Tourism contributes an average of 18.8 per cent to EAC total exports, although the percentage contribution was higher in Rwanda (30.5 per cent) and Tanzania (26 per cent),” the report reads in part.

The EAC consists of Burundi, Kenya, Rwanda, Tanzania, Uganda, and South Sudan. The most recent entrant to join in April 2016, South Sudan, is not yet a World Trade Organisation (WTO) member.

According to a report by WTO on EAC, dubbed Trade Policy Review Report by the Secretariat, the region hosts several natural attractions. Kenya and Tanzania have a coastal tourism segment, while the landlocked countries have beautiful nature and wildlife. Tourism contributes significantly to the economies of Tanzania, Kenya, and Uganda.

“Under the EAC Treaty, countries are to coordinate their tourism policies. This includes: establishing a common code of conduct for tour and travel operators, standardizing hotel classifications, and harmonizing the professional standards of agents in the industry. Common criteria for the classification of tourist accommodation establishments and restaurants have been developed by Kenya, Rwanda, Uganda and Tanzania.” WTO study reads in part.

Over the past few years, Kenya has slowly but steadily been rebuilding its tourism sector. According to the EALA report, Kenya has instituted a number of strategies that include the development of policies to support the expansion of the tourism sector.

The country has also made a provision of charter incentives meant to enhance travel within the country. Kenya’s major activities include holiday travel at 68 per cent, business travel at 18 per cent and transit at 14 per cent.

In 2018, the country’s tourism sector registered improved performance, mainly attributed to the growth of aviation, investors’ confidence, withdrawal of travel advisories, visits by foreign dignitaries and revitalized marketing efforts. Tourism arrivals for the year 2018 were recorded at 2.025 million. The challenges for Kenya include globalization which is leading to the creation of uniform standards and protocols, and the heavy taxation of the sector, among others.

The country has branded itself as “Gifted by Nature” with many tourist attractions, including wildlife, nature, geography, culture, heritage and good weather all year around. Uganda witnessed a 7.4 per cent increase in international tourist arrivals in 2018, with the numbers growing from 1,402,409 persons in 2017 to 1,506,669 arrivals in 2018.

EALA cited the country’s challenges as weak capacity in terms of instructional infrastructure for training manpower and human resources and inadequate funding.

The tourism industry is a strategic priority for Rwanda, according to the EALA report.

The Assembly also noted that the sector has been fundamental in transforming and modernising the national economy. Tourism has continued to be a leading foreign exchange earner since 2007.

The Rwanda Development Board data shows that revenue from gorilla trekking in Volcanoes National Park grew 25 per cent in 2018 to US$19.2 million. EALA also observed that notable challenges include over-reliance and dependency on the gorilla product as a major source of tourism revenue and the need for enhanced marketing as a wildlife, eco-tourism, cultural and conference destination.

The number of tourists visiting Tanzania rose to 1.5 million in 2018 compared to 1.33 million recorded in 2017. Tanzania is yet to join the EAC Single Tourist Visa.

Read Also: Billions to be won by Tanzania: Tourism and Magufuli’s unchartered terrority

The EAC Council of Ministers has therefore been urged to follow up with the countries that have not—Burundi, South Sudan and Tanzania—to join the platform.

The EALA report states, “The country further portrays rich African cuisine and culinary culture. Areas to be enhanced in the tourism sector include development of infrastructure in all provinces; re-classification of hotels and categorization of accommodation in Burundi.”

According to national accounts, accommodation and food services earned around US$135 million from 520,809 tourist arrivals in 2018, approximately US$ 260 per tourist per visit. Data shows that year-on-year tourist arrivals have increased by around 15 per cent over the last three years. This growth has exceeded the Zanzibar Tourism Development Policy of 2003, which targeted 500,000 tourist arrivals annually by 2020.

In 2018, the sector contributed an estimated 28 per cent to the islands’ GDP and 82 per cent of its foreign exchange earnings. In 2017, tourism accounted for 68 per cent of investments approved by the Zanzibar Investment Promotion Authority.

Under the EAC Treaty, countries are required to coordinate their tourism policies, including establishing a common code of conduct for tour and travel operators, standardizing hotel classifications, and harmonizing the professional standards of agents in the industry.

So far, the criteria for classifying tourist accommodation establishments and restaurants have been developed by Kenya, Rwanda, Uganda and Tanzania.

Generally, East Africa has recorded some impressive achievements in the realm of tourism owing to the conscious efforts by the EAC Partner States to work together in promoting growth in the sector.

The success of the tourism sector has benefited from immense private sector investments in hotels, transportation, marketing and product development, and dedicated government efforts in conservation.

Africa's most developed financial markets in 2022