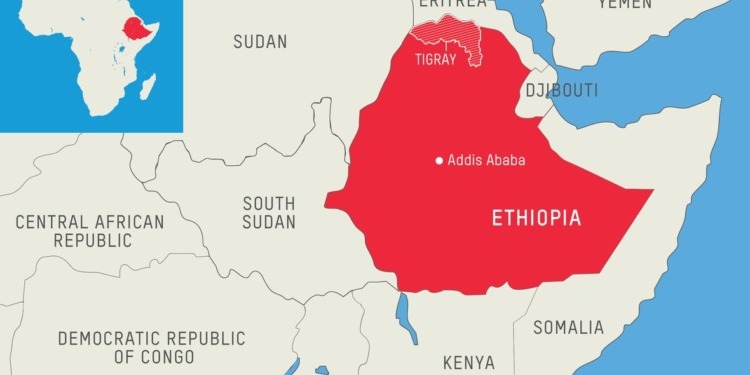 Ethiopia on the map. On November 3, 2021, Ethiopia was put under a six-month state of emergency by Prime Minister Abiy Ahmed. [Photo/Oxfam]

An interesting turn of events is the United States’ seemingly sudden hostility to Addis Ababa and what could be read as sympathy to the TPLF.

by Njenga Hakeenah
in Ethiopia, Industry and Trade
0
Share on FacebookShare on LinkedIn

It is one year since the war broke out in Ethiopia between the government and the Tigray People’s Liberation Front (TPLF).

This milestone in the war also comes as the TPLF advances towards Addis Ababa, Ethiopia’s capital leading the government to declare a state of emergency. The war that is escalating on the ground is also spilling over into the internet and the media.

An interesting turn of events is the United States’ seemingly sudden hostility to Addis Ababa and what could be read as sympathy to the TPLF. This notwithstanding, the instability in Ethiopia portends the fragility of democracy in Africa.

For decades, the larger East African region has enjoyed relative calm but it is taking little to ignite chaos and unrest if what is happening in Sudan is anything to go by. South Sudan was also in the throes just recently and now what is happening in Ethiopia, which has been a symbol of resilience, shows that this African region needs to relook at its governance style if it is to avoid a full-scale war.

With the raging war in Ethiopia, the EU notes that after one year of fighting, the conflict in northern Ethiopia has worsened and expanded which has created a devastating humanitarian crisis and undermined the territorial integrity and stability of the country and impact the whole region.

In a statement by the High Representative, the EU says that it is particularly worried about the recent escalation of fighting in the Amhara region. In addition, the Union says that the military advances of the TPLF and Oromo Liberation Army (OLA) and the aerial bombardment of Mekelle by the Ethiopian Airforce risk dragging the country further into fragmentation. These activities will also cause widespread armed conflict which will worsen the situation of the Ethiopian people.

“The EU reiterates that there is no military solution and calls on all parties to the conflict to implement a meaningful ceasefire with immediate effect,” the statement adds, calling on all sides to engage in political negotiations without pre-conditions while showing responsibility and political leadership.

“The EU reiterates its call for the full and immediate withdrawal of Eritrean troops from Ethiopia’s territory.”

Already, close to 3 million people have fled their homes with more than 5 million in need of urgent humanitarian assistance due to the escalating violence in Tigray.

In Afar and Amhara which neighbouring the regions of Tigray, an estimated 1.5 million people are said to be in need of emergency assistance. To ensure predictable, continuous and full access of humanitarian aid into all territories that need of assistance, the EU High Representative says immediate action is needed to avert a large-scale famine.

Acting in good time will also help relieve the suffering of the local population and the internally displaced persons (IDPs).

With many reports that there is blatant abuse of force in the Ethiopian war, the EU has also called on all parties in the conflict to fully respect International Humanitarian Law which includes protecting civilians and humanitarian workers.

State of emergency in Ethiopia

On November 3, 2021, Ethiopia was put under a six-month state of emergency in an announcement by Prime Minister Abiy Ahmed. The announcement came as Tigrayan forces rapidly advanced towards Addis Ababa.

Abiy, the 2019 Nobel Peace Prize winner, has been reported to have told citizens to take up arms and defend their neighbourhoods from the TPLF.

On Tuesday, Facebook removed the Sunday post by Abiy saying it violated the platform’s policies on inciting and supporting violence.

Prior to the escalation and advancement of the forces, Abiy had promised to swiftly end the offensive launched against the TPLF last November.

Economically, Ethiopia is on the receiving end after the US government declared that the East African nation had violated the African Growth and Opportunity Act (AGOA) due to the alleged human rights violations in Tigray. This means that Ethiopia will not have duty-free access to US markets if it does not comply by January. If the AGOA privileges are removed, it would lead to an “existential threat” for Ethiopia’s manufacturing sector.

The non-compliance could have come from the publication of the joint Ethiopian Human Rights Commission (EHRC) and OHCHR report on November 3.

Ethnic violence, torture, sexual and gender-based violence, property looting, destruction of infrastructure and religious sites and violations of international humanitarian law and other human rights violations are some of the issues highlighted in the report.

On another economic front, the TPLF recently seized key towns bringing it closer to controlling the main trade route to the Port of Djibouti. Ethiopia, which is a landlocked country, could see the rebels strangling the capital while freeing up a route for the much-needed aid to an estimated 400,000 people who are facing famine in Tigray.

Ethiopia domestic market is large with over 110 million people. The country is the second most populous in Africa after Nigeria.

The East African nation was one of the fastest-growing economies in the world over the last decade where it averaged an average annual growth rate of 9.4 per cent. Ethiopia’s real Gross Domestic Product (GDP) slowed down to 6.1 per cent in 2019/ 2020 largely due to the Covid-19 pandemic. By 2021, growth is expected to remain close to 6.4 per cent, according to the World Bank.

Broad policy reforms are changing the country’s business climate with the government planning to privatize leading state-owned enterprises. This signals market-based reforms in a significant shift toward flexibility with respect to economic policymaking.

An acute foreign exchange shortage has remained a leading challenge but the civil conflict could compound the challenges due to the increased political and economic instability in the near future.

In 2019, Ethiopia exported US$7.6 billion worth of goods while imports were US$20.0 billion. This resulted in a negative trade balance of US$12.4 billion.

Ethiopia’s largest export sector in 2015 was vegetables with 64.69 per cent in total exports. The country also exported 1,654 different products in the same year.