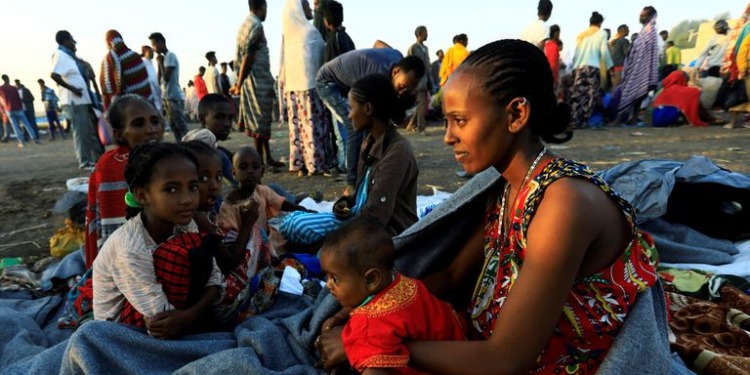 ICRC says that since commercial traffic ground to a halt over the last two weeks, food prices have skyrocketed / COURTESY

ICRC says that since commercial traffic ground to a halt over the last two weeks, food prices have skyrocketed

by Wanjiku Njugunah
in Agribusiness, Ethiopia, Industry and Trade
0
Share on FacebookShare on LinkedIn

A new finding by the International Committee of the Red Cross (ICRC) has revealed that commercial activity in Ethiopia’s Tigray region has been hampered by the ongoing crisis that began with fighting nine months ago.

In a statement, ICRC says that since commercial traffic ground to a halt over the last two weeks, food prices have skyrocketed.

Banks in the region have also been closed, with IRC noting that people are running out of cash to cover basic needs.

The committee has also revealed that factories have been destroyed, while others have been damaged.

“Many businesses are closed, leaving people out of work; and affecting the availability of essential goods and services, including healthcare,” the ICRC notes.

The committee also notes that the only company producing oxygen went out of business and the few functioning hospitals – submerged with referrals from no longer functioning primary healthcare centres – are all facing shortages as the country continues to address the Covid-19 crisis.

Additionally, healthcare facilities and water treatment plants also largely continue to run on generators, with no regular provision of electricity or fuel in the region.

Nicolas Von Arx, the Head of the International Committee of the Red Cross (ICRC) delegation in Addis Ababa noted that people are showing incredible resilience and solidarity with each other in this crisis.

“However, their reserves and savings are exhausted. Restoring normal commercial activity and supply chains is also vitally important. Humanitarian assistance can’t replace them,” he said.

Read: Illegal arms to be wiped out of EAC

The conflict in the region began in November 2020, after disputes between the Ethiopian government and forces in the northern Tigray region threw the country into turmoil.

So far, thousands have died with more than 350,000 people living in famine conditions, according to the BBC.

The conflict is going on at a time when the Food and Agriculture Organization of the United Nations (FAO) has warned that the upcoming seasonal rains in the hunger-stricken North offers a tight window of opportunity for farmers to get a crop in the ground and reboot local food production – but without funding and better access by aid agencies, that opportunity could be missed.

“Many farmers have been stripped of productive assets like seeds, animals, or tools due to looting, or saw their sources of credit disappear and seed markets disappear. As a result, local food production has been brought to a virtual standstill,” FAO Director of Emergencies and Resilience, Rein Paulsen said.

“The rural communities who play a critical role in keeping northern Ethiopia fed, urgently need support if they are going to manage to get seeds in the ground ahead of the impending short rains.

FAO says that in addition to lost agricultural assets, the state of core basic services across northern Ethiopia is impeding relief efforts.

“Electricity and fuel are lacking, cash and credit are not to be found, and there is only one functional road in and out of the region”, noted Paulsen.

According to the organization, the conflict commenced at the peak of what would have been the main Maher season harvest before many households had the opportunity to harvest their crops.

Additionally, over 60 per cent of the population in Tigray and the neighbouring zones of Amhara and Afar, more than 5.5 million people, are now coping with Emergency, Crisis, or Catastrophe levels of hunger and are at high risk of quickly sliding into starvation without support.

FAO says that although the majority at 80 per cent of people in northern Ethiopia depend on subsistence agriculture, so far very little financial support has been allocated to agricultural interventions that can help at-risk families resume productive activity and produce food for themselves and their communities.

“The crisis in Ethiopia is part of a disturbing wave of surging acute food insecurity around the globe, driven by a toxic mix of pre-existing threats like conflict, climate shocks, and economic disruptions compounded by the COVID-19 pandemic,” the organization notes.

Read: Why businesses should invest in promoting global peace