It is early January, the World is still celebrating the new year , so is Somalia, the Horn of Africa. Two F-35B, single pilot airstrike jets strike at al-Shabaab operatives killing three members of the terrorist group, reported the U.S. Africa Command, AFRICOM. 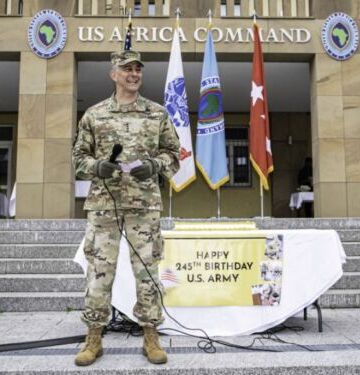 The United States Africa Command (AFRICOM), is a joint military command body of the US for African military response against mainly terror threats.

However, AFRICOM is nowhere near Africa, on the contrary, it is across the seven seas in Europe, headquartered at Kelley Barracks, Stuttgart, Germany. Now Africa wants the command post brought closer to the continent, after all it was formed to address terror threats on the continent was it not?

During its formation in 2007, the White House announced that AFRICOM “will strengthen our security cooperation with Africa and create new opportunities to bolster the capabilities of our partners in Africa. Africa Command will enhance our efforts to bring peace and security to the people of Africa and promote our common goals of development, health, education, democracy, and economic growth in Africa.”

The proposal was passed and a budget set, AFRICOM came into being, but not on the continent it was created to protect, it was set up in Europe, however, as stated, Africa wants AFRICOM HQ brought to the continent.

The latest to make this call is Nigeria’s President Muhammadu Buhari. In a virtual meeting held with U.S. Secretary of State Antony Blinken

Yesterday, Buhari made the case for Africa saying;

“Considering the growing security challenges in West and Central Africa, Gulf of Guinea, Lake Chad region and the Sahel, weighing heavily on Africa, it underscores the need for the United States to consider re-locating AFRICOM headquarters… near the theatre of operation.”

Makes perfect sense doesn’t it? So why Germany? Lets go back to 2007, when AFRICOM came into being. In June of 2007 several African countries expressed willingness to host the headquarters because it would bring money for the recipient country.

Ironically, at that time, Nigeria announced it will not allow its country to host a base and opposed the creation of a base on the continent all-together.1 South Africa and Libya also expressed reservations of the establishment of a headquarters in Africa.2

In a 2008 article titled ‘US shifts on Africom base plans’ the BBC writes ‘The US military has decided to keep the base of its new Africa Command in Germany for now, after only one African nation, Liberia, offered to host it.’

And: ‘Most African countries have been wary of plans to base the command, Africom, on the continent.’

Also: The then Africom’s commander, Gen William Ward, said ‘The US plan had been misunderstood by some African countries.’ So, AFRICOM went to Germany as did the annual operating budget of $276 million.

While there maybe military strategic reasons or political inclinations as to why the AFRICOM HQ is in Germany and not Africa, that is a topic for a different paper, here, lets focus on the economic reasons as to why it is not or why it should be in Africa.

What are the economic impacts of moving from Stuttgart to Nigeria?

Well, any African country lucky enough, yes lucky’ to host the AFRICOM HQ would stand to gain the benefits of injecting a whopping $276 million into its economy and that is no cheap change.

In fact the quarter a million budget was the 2012 estimate a value that almost a decade later has significantly shot through the roof. Of course President Buhari did not hinge his call for AFRICOM’s relocation on such direct economic benefits, but rather, his call was focused on the bigger overall security concerns.

Nonetheless, it is no financial lust to be inclined towards attracting this amount to one’s home ground. I should at this point also highlight the fact that it is not only Africa that is eyeing that lump sum;

‘Military bases in the United States have regularly been suggested by members of Congress hoping for an economic advantage for their constituencies.’ Admits UPI’s Ed Adamczyk in his article ‘Nigeria calls for U.S. Army’s AFRICOM to move to Africa’ (28.04.21)

Further still, not only would that amount come with the base but some 3000 personnel would also flock and this means a vibrant multiplier effect for the town if not city where the base will be set up. So the economic impact of moving the base from Stuttgart to Nigeria is clear. However there is the larger economic aspect of the region, the impact beyond Nigeria’s borders.

How will improved political stability add to the economic stability in West Africa?

As President Buhari put it “Considering the growing security challenges in West and Central Africa, Gulf of Guinea, Lake Chad region and the Sahel, weighing heavily on Africa, it underscores the need for the United States to consider re-locating AFRICOM headquarters… near the theatre of operation.”

The instability caused by security concerns affects not Nigeria but the entire West Coast of Africa. Now, given the fact that this region is home to some of the continent’s wealthiest economies, this instability affects all of Africa.

As such, by default, all of the World is affected By the terror instability of West Africa. Nigeria is Africa’s largest economy, its productivity is gravely affected by terror threats and attacks.

West Africa is rich in resources, from palm oil to minerals and more so black gold, crude oil. Terror groups are using the financial exclusion of vulnerable groups to recruit. It is easy to convince one that ‘the country is rich yet you suffer in abject poverty, come fight with us and reclaim your country’s wealth.’

Hence moving AFRICOM to the continent will go a long way to create economic and political stability which in turn will serve to meet the core purpose of AFRCIOM’s creation in the first place, bringing regional security and prosperity in Africa.