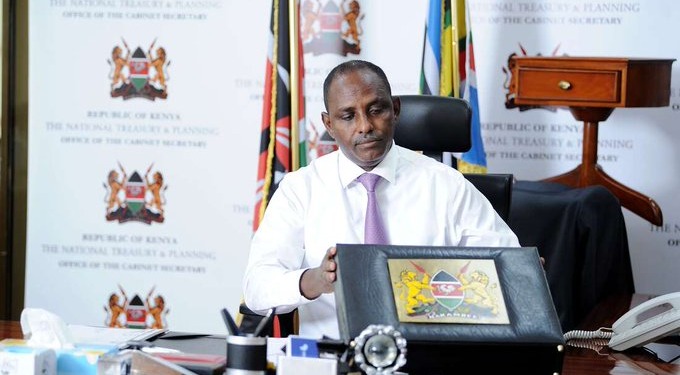 Kenya set aside Sh23.1bn to continue with the implementation of the Economic Stimulus Programme

by Wanjiku Njugunah
in Countries, Kenya
0
Share on FacebookShare on LinkedIn

The country’s minister for treasury Ukur Yatani read the budget in the parliament building, determining how the Jubilee government would be spending money even as the end of its ruling term nears.

Yatani said the monies would be spent on priority programs which are; offering food security, affordable housing, affordable healthcare, and manufacturing.

The Cabinet Secretary said the amount will be spent for both enablers and drivers’ of the projects, during the 2021-22 financial year.

A total of Sh60 billion was set aside to support relevant programs that will enhance food security in the country.

Of the amount, Sh7 billion will be channeled to national agricultural and rural inclusivity projects, Sh1.8 billion for emergency locust response, and Sh2.7 billion for the Kenya cereal enhancement program.

A whopping Sh294.5 billion was also allocated to the country’s security agencies, an amount that will be shared between the National Police Service, Defence, and the National Intelligence Service.

Of the amount, Sh119.8 billion will be dedicated to defense, Sh42.5 billion for the NIS, and Sh110.6 billion for policing and prison services.

Some Sh1 billion has also been set aside for the police modernization programme.

To enhance the war on crime, the Cabinet Secretary allocated Sh1.5 billion for National Communication and Surveillance System and Sh335 million that will be used to equip the national forensic laboratory-based at the Directorate of Criminal Investigations headquarters.

The government also set aside  Sh310.7 billion which will go towards investing in the ongoing infrastructural projects.

Yatani said a huge chunk of the funds at Sh94.7 billion will go towards facilitating the ongoing road and bridge construction in the country.

Of the amount, another Sh36.1 billion has been set aside for the rehabilitation of roads while another Sh54 billion will be utilized for road maintenance.

The ongoing construction of the Standard Gauge Railway Phase Two has also received a major boost as the government has pumped Sh27.2 billion to go towards its construction.

Yatani also maintained that the government is committed to scaling up modern highways as well as urban and rural roads in every part of the country a move he underscored will go a long way in opening up the country to robust economic activities which will spur growth.

The government has also set aside Sh23.1 billion to continue with the implementation of the Economic Stimulus Programme launched last year.

Yatani said the funds will be released to cushion vulnerable citizens and businesses particularly those affected by the COVID-19 Pandemic.

Out of the amount, Sh3 billion is earmarked for youth empowerment and employment creation under the Kazi Mtaani Programme while Sh2.6 billion will go towards enhancing liquidity to businesses.

An additional Sh6.4 billion will go towards improving education outcomes, while Sh6.9 billion is for improving the environment, water, and 57 sanitation facilities.

Treasury has also given Sh1.97 billion for improving agriculture and food security as well as Sh1.2 billion for recruitment of health workers.

Yatani explained that the monies are to facilitate the performance of transferred functions.

The county government will be left with Sh11.9 billion.