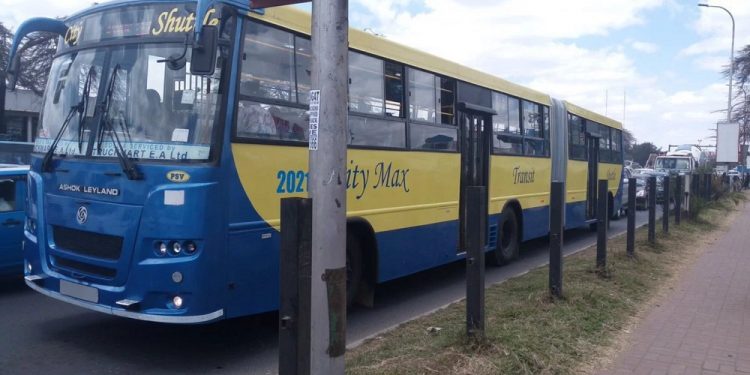 A high capacity bus by City Shuttle in Nairobi. Kenyans will have to wait longer for orderly public transport. [Photo/BabyShayBs/@Ma3route]

SWVL set the stage for a battle of the titans

Kenya’s public transport sector is chaotic and only those who are part of the system survive the anarchy.

In January this year, the Egyptian-run bus hailing company SWVL jumped into the deep end to set the stage for a battle of the titans. Order on the one hand and disarray on the other.

For the victors, only time would tell.

Following up on what was meant to unsettle and reform public transport in Kenya, Safaricom’s Little borrowed a leaf from SWVL and joined the fray.

For Kenyan commuters, the party started in earnest and the rhythm and order started leaving a mark.

With every passing day, the hitherto long queues at passenger pick up points started disappearing earlier than usual. This was only witnessed on public holidays or off-peak hours when Kenyans have an easier time commuting by public means.

But on September 30, the celebrations and the routine that was building were brought to an abrupt halt. At least for Little Shuttle.

An email from Little CEO Kamal Budhabhatti notified customers that they were discontinuing the service which had become part of their lives for the past seven months.

It was a bombshell and with it came the disappointment that comes with government failure. However, as details regarding the suspension became clearer, it was evident that reforming Kenya’s transport sector would take more than having a big brand name.

For almost two years now, the country’s Bus Rapid Transport (BRT) system seems to have hit a brick wall as the government blows hot and cold over when and how it would be operated.

The government had promised to deliver buses to decongest the city but in January, it was becoming clearer for Kenyans that the plan was not well thought out. At this time, the Uhuru Kenyatta government said that the high-capacity buses expected for the service would be imported from South Africa.

This was a turnaround from a previous pronouncement that the buses would be acquired locally. It caused an uproar among the Kenya Association of Manufacturers (KAM) members who felt that the government was shortchanging local assemblers.

With this seeming hijacking and failing of the country’s manufacturing sector by the government, the matatu cartels won by delaying the solution to the pains of public transportation.

When Budhabhatti sent the email to Little Shuttle users, it was a reminder of how Kenyans have been subjugated by the rebel transport sector that is a law to itself.

By shoving Little and SWVL out of the sector, the cartels running Kenya’s matatu industry have everything to smile about. The multibillion sector is run by a cavalier of operators who determine who operates where, how and when.

These cartels have ensured that bringing sanity to Kenyan roads remains a pipedream.

In his announcement, Budhabhatti said that they had received a communication from the authorities that they were not allowed to hail a shuttle on Little.

The National Safety and Transport Authority (NTSA) claimed that the shuttles Little was hailing were not properly licensed. This, curiously, was coming seven months after the shuttles started operating.

In a statement by NTSA Director General Francis Meja, the Authority had blacklisted Swvl and Little shuttle for violating operation rules. He added that the two companies were operating in Nairobi contrary to their licenses.

Despite the government’s failure to streamline the sector, the lethargy in reforming the sector and failed policies are testament to how deep these cartels are rooted.

In defending the bus hailing service, Budhabhatti said, “We have been running these services for the last three quarters. We have proved that public transport can be operated in an efficient and profitable manner. A manner that can bring sanity in the chaotic public transport in our city.

When the government launched the BRT system, the lanes on the roads were marked but so far there is no single bus on the Kenyan roads.

Interestingly, the Treasury allocated Kshs 5.53 billion to be used in the construction of the special lanes for the high-capacity buses.

Despite the disturbance, SWVL has been operating on its routes.

The company is also hiring for different positions in Kenya showing that possibly there is hope for a sector that is irredeemably tainted.

Regarding the harassment by the police and the cancellation of their operating license by the government, SWVL is yet to issue a statement.

The bus hailing companies have given a section of Kenyans the feel of what public transport should be. With reliable, clean and assured quality service, it is possible to make the sector one of the largest revenue earners for the government.

The NTSA says that these two companies can only operate when they comply with the PSV Regulations.

“The vehicles under these hailing app companies acquired a Tours Service Licence (TSL). The authority notes that Little Shuttle and Swvl are operating the vehicles contrary to the provisions of the PSV regulations,” he said.

To address the growing need for reliable transport in the city of Nairobi, the government deployed some National Youth Service (NYS) buses to serve some of the highly populated areas.

However, just a year into the service, 18 have been grounded with the Auditor General Edward Ouko revealing last August that less than 10 of the buses were operational.

In a report tabled before parliament, Ouko said the programme had 27 buses but an audit revealed that only nine buses were operating while 18 were grounded after breaking down.

The buses were to serve commuters on the Githurai, Mwiki, Kawangware, Kibera, Mukuru Kwa Njenga, Kariobangi and Dandora routes in the programme dubbed Okoa Abiria.

During the programme launch in March 2017, NYS Director-General Richard Ndubai said the project was a long-term solution to resolving the city’s transport crisis. He added that there would be an additional 50 buses to serve other routes within Nairobi. This is yet to happen.

Majority of Kenya's job-seekers dream of working at Safaricom