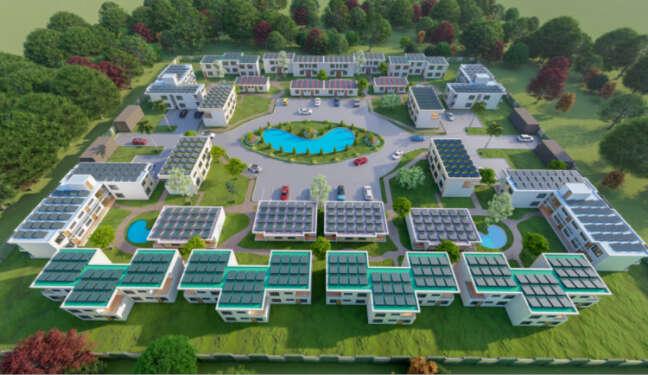 UK investors- Capstone Projects - keen on getting a share of affordable housing in Kenya. PIC

This therefore is an investment opportunity for developers to increasingly apply for low-cost housing construction methods such as alternative building technologies which are known to reduce construction costs by as much as 50%.

by Kawira Mutisya
in Kenya
0
Share on FacebookShare on LinkedIn

Real estate developers, Capstone Projects, have set foot in Kenya seeking to invest in the construction of affordable houses for middle income earners.

The firm, which also doubles up as a specialist in solar energy, looks to deliver sustainable housing projects in both Kenya and Mauritius.

According to the Director of Capstone, Mr David Sweed, developers, authorities, financial institutions are all missing an opportunity by focusing residential developments on the property for the well paid or high end.

In Kenya, according to a recent report by Cytonn notes that with a rapidly growing population and more so, an increasing middle class, the residential sector has recorded the highest demand with the nationwide housing deficit standing at 200,000 units annually and an accumulated deficit of over 2 million units.

However, the largest demand has been for affordable housing to cater for the 61% of urban dwellers who live in slums and shortage in student accommodation accounting for 40% of the deficit.

This therefore is an investment opportunity for developers to increasingly apply for low-cost housing construction methods such as alternative building technologies which are known to reduce construction costs by as much as 50%.

“We target to build affordable homes made from cellular pre-fabricated concrete technology, introduce sustainable solutions (e.g. solar power or waste to energy), and create jobs for the local population.” A statement Capstone reads.

This is what Capstone intends to invest in. Capstone Projects thus aims to support the poorest citizens by giving them a start through housing that places people in decent accommodation and connects them to employment and society.

The Kenyan government has continued to push for the delivery of the targeted 0.5 million units but the implementation of the projects has continued to lag behind with less than 1,000 units delivered so far mainly through the Park Road Project and Pangani Estate, while other projects such as Shauri Moyo, Makongeni and Starehe houses are still in the pipeline.

The Kenyan government has made progress towards the affordable Housing goal of constructing 500,000 homes by 2022. In January last year, it signed a deal with various British Investors at the inaugural UKAfrica Summit to develop 80,000 units across the country. Therefore the move by Capstone to invest in housing projects in Kenya comes in at a time when the government is keen on investments in the real estate sector.

However there have been challenges. According to an industry analysis by Cytonn, some of these challenges have been linked to the unavailability of affordable financing to developers. So Capstone’s move is a welcome idea to address some of these issues.

“We are currently in the process of looking for suitable land for development. We are also in talks with power Distribution Company – Kenya Power- as we wish to o bring innovative power solutions to buildings that we construct,” Mr Sweeds says adding that this will be a move to address high cost of power within the housing projects as well as to provide a reliable source of power to the residents.

Capstone has also partnered with Chinese experts to come up with an innovation that will see to it that the solar energy is well stored for use of up to 8 hours.

The housing projects, once they are complete, will be available for the rent to buy option, direct buyers as well as those who prefer to get financing from the bank to get access to these projects.

Other challenges experienced within the Country’s real estate sector include failure to fast track incentives provided in support of the affordable housing initiative as well as the ineffectiveness of Public-Private Partnerships. Obstacles in the capital markets regulatory framework, which make it difficult to raise capital for real estate development, and the current economic slowdown due to the ongoing pandemic have also been cited as challenges facing the industry.

Many latest reports, including Shelter Afrique 2019, report of acute housing shortage across Africa currently estimating a need for 56 million housing units of which 90% (45 million) fall within the affordable housing bracket.

“The supply of affordable housing units in Africa remains a key social and economic challenge with the supply deficit continuing to increase. As at the end of 2019, the estimated supply deficit in Africa stood at 56 million units.” Says the Managing Director Shelter Afrique Mr. Andrew Pandeka Chimphondah.

The Shelter Afrique report also identifies that 17 African countries have a housing deficit of over 1 million units, amongst them Tanzania and DRC both urgently needing at least 3 million. South Africa, Madagascar and Kenya are all reported to have a shortfall of 2 million units.

The reason for the slow uptake of these projects according to the report by Shelter Afrique, is because the Private sector neither has the will nor the incentive to take on affordable housing.

Also Read: Is the pandemic a blessing in disguise for real estate?

“It is for this reason that the government must intervene, and the government usually does not have the technical capacity or the systems to deliver on affordable housing, and this is where the private sector plays a role. However, there are no policies to address this in Africa or where they exist, they are unclear. This thinking shaped our activities and direction in 2019; we believe that unlocking our second strategic goal will unlock the other strategic objectives.” The study reads in part.

Capstone therefore comes in to demystify the real estate sector as we know it by providing social amenities within the estates where the projects shall be set up.

“We are also looking at investing in a reliable transport system to ease movements for the residents as well as dropping off students to schools etc,” says Mr Sweed.

Capstone has so far identified Kenya and Mauritius for this ambitious project and intends to kick off the projects this year.

“We have chosen the two countries because looking at their stability, they have ranked very well for the past decade. This is a very good environment for investment,” Mr Sweed adds.