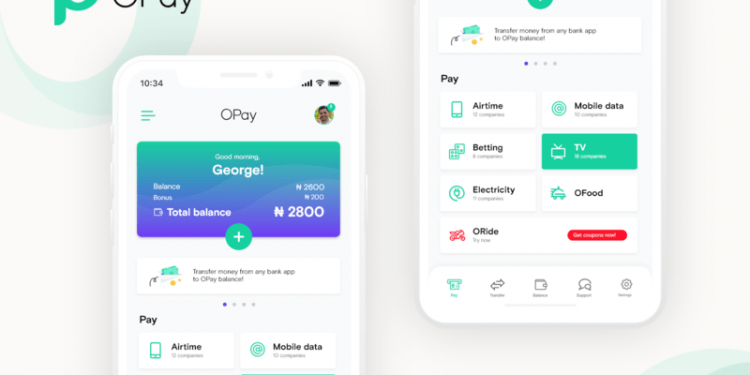 Millions of users in Nigeria rely on OPay to send and receive money, pay bills, obtain transportation and order food and groceries.

by Kimani Chege
in Nigeria, Tech & Business
0
Share on FacebookShare on LinkedIn

OPay, one of the fastest scaling growth companies in Africa, has announced that it raised $120 million of series B funding, less than 6 months after it announced its last funding round of $50 million in June.

The company, which was incubated by Norwegian based, global consumer Internet company Opera, is already Nigeria’s leading mobile wallet and motorbike ridesharing provider, and is rapidly expanding.

OPay is one of the fastest growing companies in Nigeria, providing consumers with a wide range of services including mobile payments and transfers, ridesharing and food delivery. The company plans to use the new capital to further accelerate its expansion across its multiple verticals, as well as entering new African markets.

“OPay will facilitate the people in Nigeria, Ghana, South Africa, Kenya and other African countries with the best fintech ecosystem that Africa has ever seen, paired with the inclusion of daily use services such as transportation and delivery. We see ourselves as a key contributor to expanding financial inclusion in Africa, and helping local businesses and workforces to thrive from opportunities created by new, digital business models. The capital raised will be allocated to African countries where local regulation is supportive of scientific and technological entrepreneurship in the fintech space,” commented Mr. Yahui Zhou, CEO of OPay.

OPay launched its mobile payment service in August 2018, creating an infrastructure on which the company is now adding new services. The agent-centric mobile payment operation focused on reaching the massive unbanked population of Nigeria.

Since its Series A funding, OPay tripled its active agents to over 140,000 and saw daily transaction volumes doubling to exceed $10 million per day, furthering the company’s position as the largest mobile transaction provider in the country.

Additionally, OPay’s motorbike ridesharing service has become the largest of its kind in Nigeria, more than tripling daily rides over the past three months, and the company recently launched additional services around food delivery and cashless payments for offline businesses. While still focusing on Nigeria, OPay has the ambition to expand across the African continent.

Mr. Zhou further commented, “OPay has become one of the most important providers of online consumer services in Nigeria, and is recognized widely among other players in the market. We are excited that GaoRong Capital, SoftBank Ventures Asia, BAI and Redpoint China are coming onboard in this round.

The additional capital will allow OPay to speed up its expansion in mobile payment services and its growth in new verticals, Further, the strength of Opera’s brand and OPay’s emerging position will continue to benefit both companies and further escalate their ability to take leadership in several internet verticals across Africa.”

Read also: Tala’s next mission after freezing operations in Tanzania(Opens in a new browser tab)