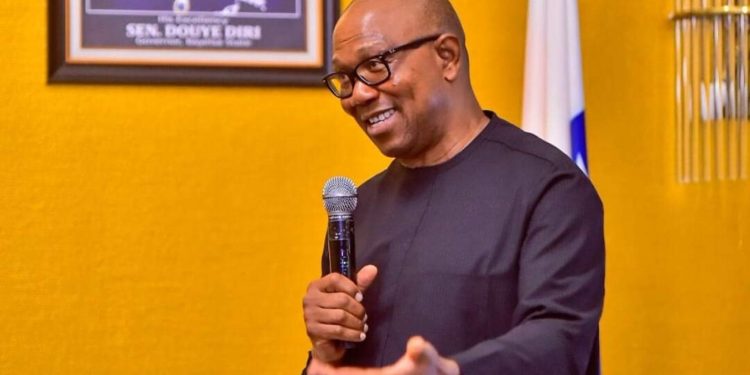 Peter Obi of Labour Party has emerged as the leading candidate in Nigeria's presidential elections in 2023. [PHOTO/DAILYPOST]

With many wondering who will win the presidential election in 2023, Peter Obi of Labour Party has emerged as the leading presidential candidate in Nigeria

by James Ndwaru
in Nigeria, Politics
0
Share on FacebookShare on LinkedIn

In the run-up to Nigeria’s presidential elections in 2023, the electorate confronts the challenges of soaring inflation, a plummeting currency and prevalent insecurity.

Nigeria will go to the polls in February 2023. As per the Independent National Electoral Commission (INEC) electoral times, campaigns are already underway in Africa’s most populous nation.

Democracy returned to Nigeria in May 1999. Since then, the presidential elections have remained a two-horse race between the All-Progressive Congress (APC) and Peoples Democratic Party (PDP). However, the upcoming election presents a shift with the Labour Party fronting Peter Obi as their presidential flagbearer.

READ MORE: Nigeria: the transformative effects of the Petroleum Industry Act (PIA) on the oil and gas industry

Under the All-Progressive Grand Alliance’s umbrella, Peter Obi served as the Anambra State Governor from 2006 to 2014. He was also Atiku Abubakar’s running mate in previous Nigeria presidential elections. However, they lost to the current president Muhammadu Buhari.

Obi remained focused on making Nigeria work, initially declaring his ambition to run as president in March 2022 under PDP. Atiku Abubakar, Obi’s former principal, also sought PDP’s endorsement to run for president in 2023. Days before PDP presidential primaries in May 2022, Obi decamped to the Labour Party, becoming the party’s flagbearer.

Atiku won the PDP primaries with Tinubu, a long-serving leader of the commercial hub of Lagos and the most dominant politician in southwestern Nigeria, winning the APC primaries by a landslide.

Since becoming a presidential candidate, Obi has popularised the Labour Party among the Nigerian electorate. As a result, Obi has established a great support base anchored by the youth who have vowed to work for nothing short of a victory.

Some have wondered whether Obi will manage to upset the status quo that has defined Nigerian politics since 1999. However, great support for Obi has been borne of the young generation’s apparent frustration with Nigeria’s political class.

More specific, many people view the presidential candidates from the two major political parties, APC and PDP, as representatives of status quo politics that have left Nigeria on the brink of economic shutdown.

In the run-up to Nigeria’s presidential elections in 2023, the electorate confronts the challenges of soaring inflation, a plummeting currency and prevalent insecurity. Crude oil, Nigeria’s economic backbone, has seen its production slump to multi-decade lows. Moreover, the government has seen its debt servicing in the first quarter of 2022 exceed the earned revenue.

With the economic hardship biting hard, many people have blamed the two major parties for this situation. The two major parties have ruled Nigeria at various times without bettering the living standards of the citizens. Therefore, the possibility of a third force phenomenon excites many Nigerians.

Obi is the leading presidential candidate in Nigeria

In a recent opinion poll by Bloomberg on Nigeria’s presidential candidates in 2023, a San Francisco-headquartered data company surveyed favoured Obi of LP, which won a single seat in the House of Representatives and the Senate in the last election in 2019. The PDP and APC dominate the numbers in the parliamentary chambers.

According to a poll conducted for Bloomberg News by Premise Data Corp (PDC) regarding who will win the 2023 election and released before the campaign formally began, Obi scored 72% of those who had opted to vote. This follows the We2geda and ANAP/NOI poll results released recently, putting Obi at 51% and 21%, respectively, ahead of other competitors.

Of those polled by PDC regarding Nigeria’s presidential elections, 92% said they had resolved how to vote, with 72% naming Obi as their first option. Of those who remain undecided, 45% indicated the 61-year-old former governor remains their candidate of choice.

In his 62nd independence address to Nigerians, Obi stated that many Nigerians are already exhausted and angry with the government failure that has plagued the nation for many years. He reiterated that the next election offers a ray of optimism to the people for a new Nigeria. However, the presidency must do things right this time round.

He noted that, at 62, Nigeria had nothing to celebrate. The country still struggles under the weight of corruption, terrible administration, insecurity, a deteriorating economy, misuse of authority, and other problems.

While not everyone in this active group supports Peter Obi, a significant portion of the young with the tag “OBIdients” are vocal supporters of the Labour Party’s presidential candidate, as indicated by a rise in social media popularity, particularly Twitter and the expanding rallies.

Obi-dients have marched for Obi across the country’s northern, southern, and middle belt regions in the last several weeks. They have marched in Lagos, Plateau, Bauchi, Delta, Akwa-Ibom, Edo, and the Federal Capital Territory, among other states.

Obi-dients throughout the diaspora, particularly in London, United Kingdom, have also marched in support of Obi. Each march saw a massive crowd carrying banners and reciting solidarity songs.

If elected in Nigeria’s presidential elections in 2023, Obi has vowed to deal with insecurity, poverty, and unemployment. The LP candidate also vowed to combat hunger, and corruption, enhance education at all levels and boost electricity supplies.