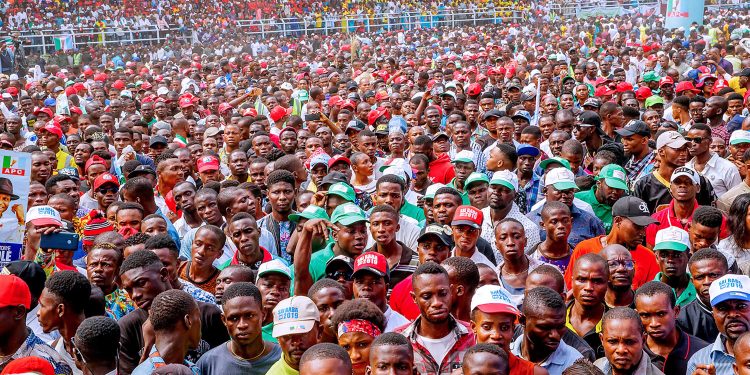 Nigeria's race to replace Buhari. Who and what next? [Photo/CNN]

Even as the country goes to the polls, many indicators show that Nigeria has been on a downward trend under the current leadership

by Joseph Kangethe
in Countries, Nigeria
0
Share on FacebookShare on LinkedIn

Nigeria’s presidential election is slated for February 25, 2023, as the country seeks a replacement for President Muhammadu Buhari.

Buhari is in his last term after eight years in office, and the electorate is looking to vote for their 16th president. Nigeria is Africa’s wealthiest country by GDP.

Even as the country goes to the polls, many indicators show that Nigeria has been on a downward trend under the current leadership. The naira has depreciated compared to seven years ago; insecurity has increased in the country and the executive and the parliament have been locking horns over the misappropriation of public resources.

Under Buhari’s reign, a country with a wide range of energy resources has paid over N4 trillion (US9.546 billion) in fuel subsidies, and Nigerians feel the criticality in electing a more citizen-oriented leader in the 2023 elections.

Read: Kenya’s food inflation, 2022 elections a headache for many

Despite the immense potential of the country to produce electricity, it is bewildering that Nigerians are experiencing electricity supply problems. Power generation still fluctuates between 4,000 and 6,000 megawatts (MW) despite more than 11,000 MW installed capacity.

One of the biggest failures by the Nigerian government under Buhari is the level of insecurity in the country. Religious leaders and other experts say that the President has failed to control the security situation in the country.

Buhari races to complete infrastructural projects before the 2023 exit

One of the biggest challenges eating into the development of Africa is the stalling of projects as power is transferred from one administration to another.

With national elections slated for 2023, there is great motivation to complete longstanding infrastructure projects to give the ruling APC party an edge against their rivals in the polls.

President Buhari of Nigeria is keen to complete critical infrastructure projects as elections approach next year.

One of these projects is the Lagos light rail train project, which has gathered dust for decades. The project is back in motion, with the state government optimistic that the first phase of the Blue Line – one of the two lines to form the Lagos Rail Mass Transit (LRMT) system – will be operational this year.

Power infrastructure is a crucial area of interest. The country is rushing on the six-year multi-billion-dollar pact with German company Siemens to expand and revamp the dysfunctional national grid to unlock at least 25,000 megawatts (MW) of electricity by 2025.

On the renewable energy side, the government is working on the 3,050 MW Mambilla Hydropower Project in Taraba, which has dragged on for over 40 years despite significant budgetary allocations.

Lekki Deep Seaport is among these critical projects. The project is expected to begin operations by the end of 2022, easing the burden on the Apapa cluster ports in Lagos, which have suffered severe congestion over the years.

The challenges for Buhari to build a concrete legacy for himself and his country under his reign are infrastructural deficits such as good roads to access these areas, high levels of bureaucracy, misplaced interests between government agencies and operating firms and limited funding.

The next President of Nigeria will inherit a heavy debt from President Buhari’s administration.

In the current government’s last budget, more than 22 per cent (N3.8 trillion) will be used to service debts. Domestic debt servicing will take N2.5 trillion, while foreign debts will take N1.1 trillion. N2.70 trillion will be spent on sinking funds for loans.

As is a growing challenge in Africa, the debt to GDP ratio, which currently stands at 22.47 per cent, is fast-growing, and the next President will have to put a regulatory gear on Nigeria’s growing debt.

For his predecessor in the 2023 elections, Nigerians are demanding solutions from the aspirants that will eliminate the challenges around poverty, education, macroeconomics, insecurity and gender equity before deciding who to elect.

Read: African elections to watch in 2022 and how businesses can survive them

The Nigerian government has failed to control terrorism, jihadism, regional clashes, kidnapping, insurgency and banditry. This instability is affecting the country’s progress in the different facets of the economy and it is worrying.

Children as young as 12 years old are joining terrorist groups, disrupting peace and stability, a situation that is not conducive for businesses in the country. Farms have become battlegrounds, reducing the agricultural productivity of the nation.

Some people have linked the current surge of insecurity to the ever-growing poverty situation in the country, as youth employment staggers at about 34 per cent.

As the election nears, citizens are worried about their safety as they go to cast their votes, expressing fear that the security situation in the country might interfere with the credibility of the 2023 general elections.

The pattern of insecurity in Nigeria has been regionalized; militia groups in the south have characterized it, insurgency in the north, kidnapping, ritual killings, and political and non-political orchestrated assassinations across the nation.

Audu Bulama Bukarti, a senior analyst on Sahel security at the Tony Blair Institute, says the scale of the insecurity threatens the very fabric of Nigerian society. Human lives are lost or permanently damaged with every attack, and faith in democracy and the country is diminishing.”

Nigerians hope that the next president will be able to deal with the insecurity in the country and restore the glory of the wealthiest nation in Africa. However, his succession is not an easy fit.

Buhari’s stalemate to pick his successor

Incumbent presidents in Africa have grown fond of having a preference for whom they wish to succeed them. A case in point; Kenyan President Uhuru Kenyatta is campaigning fervently for the former Prime Minister Raila Odinga over his Deputy, William Ruto.

President Buhari is not an exemption. But his case is a little more difficult as he has a handful of loyalists who wish to succeed him. Over thirty-eight candidates have shown interest to run for the presidency in the West African country.

The main parties interested in lifting the presidency are the All Progressives Congress (APC) and the main opposition party, Nigeria’s People’s Democratic Party (PDP), among several other parties.

Candidates interested in the top seat through the APC include:

The former governor of Lagos state and the chairman of the party currently in government openly announced his interest in being the elected President of the Federal Republic of Nigeria on April 15, 2022.

Tinubu was critical in forming the All Progressives Congress (APC), the party that allowed Buhari to be taken seriously for the first time by southern voters in 2015 and helped him end his serial losses in presidential elections that began in 2003.

He also gave President Buhari crucial support that propelled his re-election in 2019. The President appeared to have long squandered his goodwill with his new voters south of the Niger and Benue rivers.

Tinubu believes Nigeria should be a global superpower in oil and gas generation saying that his presidency will bring this ambition to completion.

The successful operation of the Econet telecommunication company in Nigeria, nowadays called Airtel Nigeria (an enterprise among the top ten businesses in Africa), is linked to Tinubu.

Perhaps the most significant declaration so far, President Buhari’s deputy, Yemi Osinbanjo, is also interested in holding the most powerful seat on Nigerian soil.

He has been a loyal and exemplary active Vice President, praising his boss and the executive in his April 11 declaration speech. Upon his declaration, youths took to the streets in various states in Nigeria, drumming up support for Professor Yemi Osinbanjo.

“We must complete what we started; radically transforming our security and intelligence architecture, completing the reform of our justice system, focusing on adequate remuneration and welfare judicial personnel and ensuring justice for all and the observance of the rule of law. We must rapidly advance our infrastructure development, especially power, roads, railways and broadband connectivity, providing an excellent environment for businesses to thrive and taking the agriculture revolution to the next level.”

Osinbanjo believes that one way of dealing with unemployment in Nigeria, which is leading the youths to terrorist groups, is the development of tech in the country that will provide millions of jobs.

The main opposition party in Nigeria is also facing difficulty arriving at a consensus over who should carry their flag to contest against the ruling party for the presidential position.

Currently, there are 17 candidates interested in the party ticket.

Others are former Vice President Atiku Abubakar; a former President of the Senate, Abubakar Bukola Saraki; former Secretary to the Government of the Federation, Anyim Pius Anyim and the Governor of Bauchi State, Bala Mohammed, as well as the only female aspirant in the race, Tareila Diana.

Seeing all these names interested in the top seat arouses suspicion as to whether the election is about the nation’s interest or that of the aspirants and the major parties in the country.

Nigeria’s population is estimated at 210 million people, half of which are women. Nigeria has produced influential leaders in the business world, Mo Abudu, Okonjo-Iweala and many others, and so can they produce capable leaders in the political world.

As of mid-April, 2022, only six women aspirants have fronted themselves to contest for the presidency. Among them are the 102-year-old Madam Nonye Josephine Ezeanyaeche, Khadijah Okunnu-Lamidi, Ibinabo Joy Dokubo, Patience Key, Olivia Diana Teriela and Angela Johnson.

Nigerian women must fine-tune a plan for mainstreaming gender in governance to public commitments for equity, affirmative action and gender mainstreaming.

The race for cryptocurrencies in Africa

Zimbabwe: Best sectors to invest in into the next decade