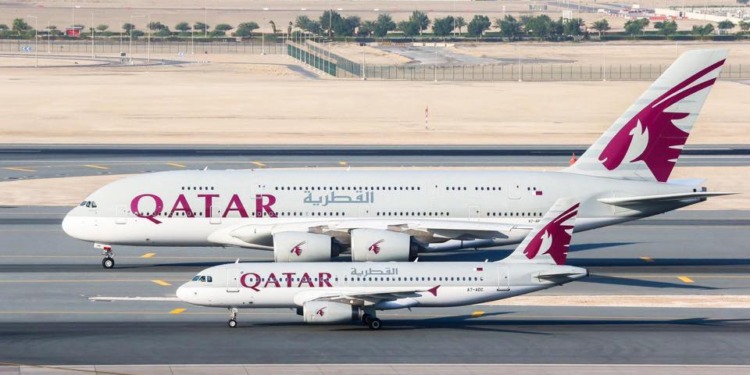 Qatar Airways made its inaugural flight into Harare this week on sixth opening Zimbabwe to a major airline hub and showcasing its confidence in the Second Republic's efforts to transform the economy.

Qatar Airways made its inaugural flight into Harare this week on sixth opening Zimbabwe to a major airline hub and showcasing its confidence in the Second Republic’s efforts to transform the economy.

Zimbabwe is now connected to the massive hub airport at Doha with all its connections around the world. The new routes were the airline’s fifth and sixth destinations in Africa since the outbreak of the Covid-19 in December 2019.

This agreement will see Qatar Airways fly to Harare three times a week from Doha using a Boeing 787 Dreamliner.

In lauding this great infrastructural development project, through his representative, and the Principal Director in the Ministry Mr. Allowance Sango at Robert Gabriel Mugabe International Airport, Transport and Infrastructural Development Minister Felix Mhona said that Zimbabwe and Qatar have had good relations and given that the Middle East country has expressed interest in cooperating in critical sectors for the mutual benefit of the two countries.

“The arrival of Qatar Airways today is a testimony to these relations. Apart from great economic and social ties, the two countries are blessed with diverse tourist attractions.  These attractions are visited by millions of tourists annually and its opportunistic that they are now linked by this air service to bring a perfect combination of dream tourist destinations through this world class global airline,” said Minister Mhona

Mhona went ahead noting that President Mnangagwa seeks to turn the country into an upper middle class economy by 2030, and thus air transport will play a critical role in enabling this endeavor as it opens and connects markets, facilitates trade and enables industrial link into global supply chains.

“As Zimbabwe, we believe that increased connectivity between Zimbabwe and other continents such as the Middle East is mutually beneficial. It is therefore paramount that we enhance air connectivity between our two countries. As a sign of the Republic of Zimbabwe’s commitment to the open skies policy, the Government has been granting Fifth Freedom Traffic Rights to non-African states to ensure improved global connectivity. This has been evidenced by Qatar Airways flying into Harare via Lusaka,” he said.

Also Read: The State Of Foreign Direct Investment In Mozambique

Environment, Climate Change, Tourism and Hospitality Industry Minister Mangaliso Ndlovu also in attendance hailed the project and partnership between the republic of Zimbabwe and Qatar for entering into such agreement that would see both entities gain and open markets for further trade at different fields hence transform economy.

The coming in of Qatar Airways, would go a long way in boosting tourism, whose fortunes suffered owing to Covid-19 induced challenges. Qatar Ambassador to Zimbabwe, Mr Tariq Al-Ansari who recently presented credentials to President Mnangagwa said his country was committed to continue deepening cooperation between the two countries.

Qatar Airways vice president for Africa Hendrik du Pretz said the Harare-Lusaka route will help the airline build its connectivity to the African region while connecting their passengers to over 140 destinations globally.

“We believe in Africa’s aviation potential and will work to establish long-term partnerships in Harare. After all, connecting people around the world is the nature of our business. And we are thrilled to have Harare as part of the Qatar Airways story, which as many of you know will experience one of its most exciting chapters next year as official partner and official airline of the FIFA World Cup Qatar 2022,” said Mr Pretz.

“I wish to encourage all aviation, tourism, other key stakeholders and Zimbabweans at large to continue with the spirit of oneness and unity of purpose so that we collaboratively market Zimbabwe as a complete package,” he said.

As travelers return to the skies with Qatar Airways, they can take comfort knowing that they are travelling with the only airline in the world that has, together with its state-of-the-art global hub Hamad International Airport, achieved four 5-Star Skytrax ratings – including the prestigious 5-Star Airline Rating, 5-Star Airport Rating, 5-Star COVID-19 Airline Safety Rating and 5-Star COVID-19 Airport Safety Rating.

Why 5th Generation Network is Significant in Propelling Socio-economic Prosperity