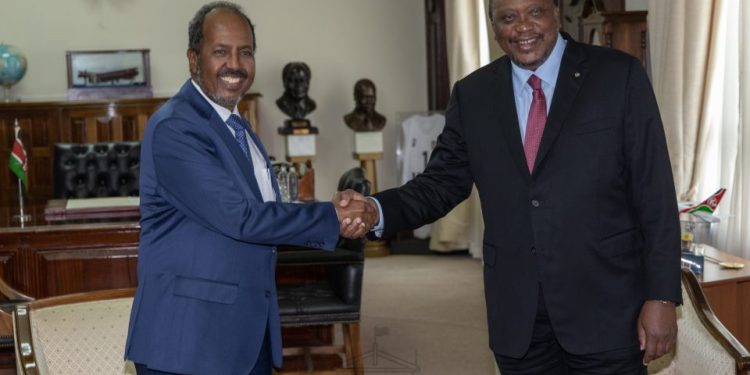 The two nations have "decided to facilitate, diversify, and develop economic and trade cooperation

The presidents of Kenya and Somalia have signed various agreements, including one to recommence trading of the stimulant khat, according to the two countries foreign ministers.

The July 15, 2022 agreement signifies that diplomatic relations are strengthening between the two Eastern African countries.

Fish imports from Somalia and Miraa exports from Kenya are expected to start again “with immediate effect,” according to a joint declaration issued by Kenyan and Somali officials.

The two nations have “decided to facilitate, diversify, and develop economic and trade cooperation and ordered the speedy market access of fish products and fish from Somalia to Kenya and vice visor, the resumption of trade in khat (miraa) between Kenya and Somalia will begin immediately, this is to take effect immediately.”

However, their relationship has been tumultuous due to a disagreement over the rights of prospective offshore gas and oil deposits, some of which are located off their disputed maritime border and belong to the United Nations.

The International Court of Justice of the United Nations issued a verdict in October of the previous year that favoured Somalia’s claim. Kenya was against the ruling and stated that it did not accept the findings that were included in the decision.

Hassan Sheikh Mohamud, the President of Somalia, made his first official trip to the capital of Kenya, Nairobi, after winning the presidency in May. While there, he met with his counterpart, Uhuru Kenyatta, and the two leaders signed several agreements, according to a joint statement released by the foreign ministers of both countries.

Based on the current mutual air flight agreement, the two presidents agreed to allow Kenya’s national carrier, Kenya Airways, to resume its flights to Mogadishu (BASA).

The request by Kenya Airways to begin flying to Mogadishu had been languishing for several years, and Somalia had initially pulled the plug in protest to Kenya’s stringent aviation laws on Somalia, which had comprised stops in Wajir for security checks.

The problem was not helped when relations deteriorated during the government of previous President Mohamed Farmaajo, who, at one point, suspended diplomatic connections with Kenya before reinstating them last year in July. This did not assist the situation, but it did not help the situation either. Farmaajo lost to Mohamud in May.

On Friday, all parties agreed to begin issuing courtesy visas to those possessing diplomatic passports, in addition to letters from each of their respective ministries of foreign affairs. On arrival, no fees will be assessed for the issuance of the visas.

Other people with service passports will also be eligible for free visas. Still, they will need to apply online before they arrive and bring letters from the relevant ministries of foreign affairs.

Ordinary passport owners must apply for visas and wait up to ten working days for their applications to be processed.

Mohamud formerly held the office of President of Somalia from 2012 till his term ended in 2017. He was re-elected in May after months of delay caused by wrangling in government, only to face a persistent Islamist terrorist and the region’s most awful drought forty years after the election results were announced.

According to the statement, the leaders have agreed to collaborate with local, regional, and international humanitarian organisations to lessen the famine’s effects and synchronise efforts in the “war against terrorism.”

Despite this, Somalia and Kenya agreed that they would work out their diplomatic differences through a shared body known as the Joint Commission on Cooperation.

According to the State House, the current head of the Economic Community of West African States (ECOWAS), President Embaló, is in town for a visit during which they would engage in “bilateral talks” on various topics.

The specifics were not discussed, but President Kenyatta is also the leader of the East African Community, which he is tasked with handing over to a new leader at the end of the month of July.