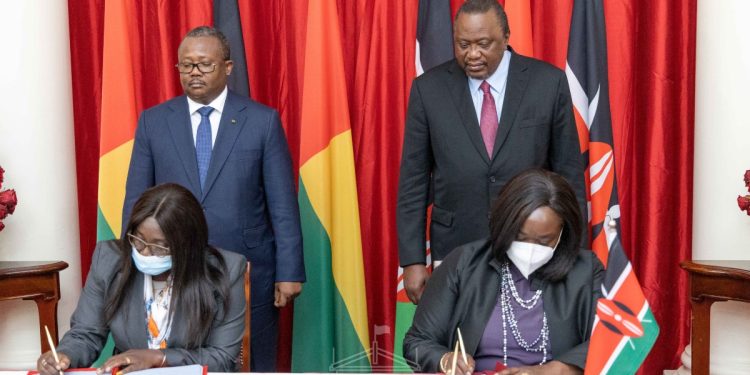 by Kiptoo Kosgei
in Business
0
Share on FacebookShare on LinkedIn
On Friday, July 15, Kenya and Guinea Bissau inked three deals as the two countries continue to bolster bilateral relations.

The bilateral pacts were signed at State House, Nairobi and witnessed by President Uhuru Kenyatta and his Bissau counterpart Umaro Sissoco Embaló who led a delegation to the East African country.

Top on the list of agreements was a deal to establish a Joint Commission for Cooperation (JCC).
JCC aims to establish a framework for bilateral consultations and cooperation between the two countries in various fields, including political, economic, commercial, scientific education, and cultural and technical matters.
The duo signed a Memorandum of Understanding (MOU) on the establishment of Political and Diplomatic Consultations between the two countries.
The consultations would involve the Foreign Service Academy of Kenya and the Ministry of Foreign Affairs of the Republic of Guinea Bissau.
Uhuru urged respective ministries in the two countries to fast-track the implementation of the agreements for the benefit of citizens.

“This will create the requisite momentum in our bilateral engagements, allowing us to accelerate growth and achieve win-win cooperation,” he said in a statement shared on State House, Kenya’s social media pages.

The president noted the time was ripe for Nairobi and Bissau to increase the level of their ties and to take advantage of the African Continental Free Trade Area (AfCFTA) trade to boost their economic relationship.
He said African countries should complement each other as they are not enemies.
While making his speech, President Embaló, on his part, said his country was committed to strengthening its long outstanding, mutually beneficial ties with Kenya.

“Guinea-Bissau and Kenya share long outstanding mutually beneficial relation, the brotherly partnership between our two countries is happening by common values and principles,” he said.

He cited agriculture and tourism as some of the investment areas that Nairobi and Bissau should explore.

President Uhuru later welcomed the newly elected Somalia president Hassan Sheikh Mohamud at State House, Nairobi.
A statement shared by the house on the hill indicted the duo also signed several agreements aimed at restoring ties between Nairobi and Mogadishu following a diplomatic standoff during the tenure of former president Mohamed Farmaajo.
Uhuru and Mohamud agreed that the two neighbours will work together going forward.
Among the deals agreed upon were the sale of Somalia fish in Kenyan markets and the export of miraa from Kenya.
Mohamud also allowed the resumption of Kenya Airways flights to Mogadishu under the Bilateral Air Service Agreement (BASA) that will be reviewed.

“Further agreed to facilitate, diversify and promote trade and economic cooperation between the two countries. Directed the immediate market access of fish and fish products from Somalia to Kenya and vice versa, the resumption of trade in Khat (miraa) from Kenya to Somalia, to resume with immediate effect,” State House, Kenya stated.

The two leaders also noted that the Kenya-Somalia border would be re-opened. This, they said, would help citizens from both countries move easily as they conduct their businesses.