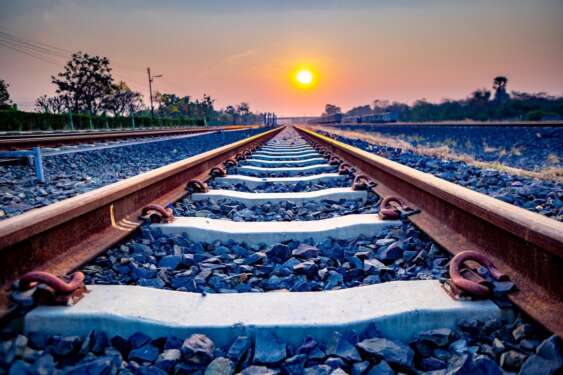 A railway line. The AfCFTA will see more investments in the continent and the BRI will facilitate the movement of goods.

This seems to be the mantra the Chinese adopted when they ventured into Africa.

The Asian giant has achieved what its predecessors could only dream of. The continent has been poorly connected with infrastructure remaining one of the biggest challenges to the movement of people and goods. This has stifled growth in Africa for decades.

To tap into the yet untouched wealth on the continent, China’s Belt and Road Initiative (BRI) is still ongoing linking countries on the continent by developing infrastructure which continues on to different continents for ease of transportation in the years ahead.

When fully implemented, the World Bank estimates that the BRI transport infrastructure can reduce travel times by up to 12 per cent. With the reduced commute times, trade could also increase by between 2.8 and 9.7 per cent for corridor economies lifting close to eight million people from extreme poverty.

The BRI covers over 60 per cent of the global population and accounts for a third of the world trade and Gross Domestic Product (GDP). This, no doubt, makes it one of the largest infrastructure programmes in the world’s history.

Enter the African Continental Free Trade Area (AfCFTA) and China is at a vantage point to benefit even much more from the continent than with just the BRI. With Africa opening up for increased trade within itself, China could just be the winner of it all.

Integrating Africa through a reliable network of transport systems will open up the continent to hitherto unexplored opportunities touching on many aspects of the continent’s rich natural heritage.

When fully implemented, the AfCFTA will have created an integrated African market of an estimated 1.7 billion consumers by 2030 from the current 1.2 billion people with an aggregated gross domestic product (GDP) of US$3.4 trillion.

Now, the Trans African Railway is an initiative to extend the Chinese government’s belt and road global rail and sea logistics plan by rail from Mombasa, Kenya in East Africa through to Lagos, Nigeria in West Africa.

Looking at the AfCFTA and the BRI, only one thing comes to mind. A richer China from Africa’s resources.

This Trans African Railway initiative is a subsidiary of an international property developer, Innohabitat Ltd, which establishes chains of branded sustainable townships with Free Trade Zone Dry Port. These off-grid townships are located strategically along the railway line to provide housing while also being the clearance and duties facilities within the bonded free trade zone.

Phase One of this project was the US$13 Billion SGR Railway from Mombasa to Nairobi which has a 3,000 acre mega logistics township at Voi. This was to be the main clearance facility for Mombasa Port to Nairobi and the junction for extension of the railway network to Tanzania and beyond.

The Voi Hub was meant to connect the new East Africa railway system which includes Tanzania, Burundi, Rwanda, and Uganda with onward connections to Zambia, DRC, South Sudan, Ethiopia and Somalia. The extensive rail extends to the Central African Republic, Cameroon and Nigeria with connections from Cameroon to Equatorial Guinea, Gabon, DRC and Angola and to Benin, Togo and Ghana from Nigeria, according to the Trans African Railway.

This railway network which is in collaboration with governments along the proposed route is meant to bring significant infrastructure development and job opportunities for local economies.

The Trans African Railway says it works with existing and pending railway infrastructure companies to integrate into an interconnecting network to achieve strategic advantages.

For efficiency and seamless connections, any missing links along the route are to be serviced by road-rail which also provides contract haulage solutions.

There is also an Airrail establishing a high quality, ultra-low cost international passenger and cargo service in West Africa with an all stops coastal route to Lagos and an all stops inland route to Abuja and return to Bissau.

The Airrail was meant to establish a logistics free trade zone and international transit hub at Bissau International Airport with daily low cost international flights via a low cost transfer to the UK, EU and the USA.

To facilitate a reliable low cost infrastructure to assist in stimulating international trade, the international passenger and cargo service is designed to connect with Searail for a seamless connection.

For Africa, the plain picture is that the AfCFTA covers trade in goods and services including intellectual property rights, competition policy, investment and dispute settlement with the aim of progressively reducing and eventually eliminating customs duties and non-tariff barriers on goods while allowing the free provision of services in priority sectors.

While this is good on face value, the truth and the reality is that those who are early to the party and have deep pockets will have a field day.

More than 70 per cent of Africans live on subsistence and this includes the businesses they run. If manufacturing and industrialisation have to happen large scale on the continent, it will most likely be done by those who have more than just enough for each day.

Here, investors who will most likely be foreigners may have their cake and eat it since not many Africans are able to get funding for projects and programmes that may benefit from the AfCFTA or the BRI rollouts.

Concerning trade in goods, the goal is set for 90 per cent of products at zero duty across the continent.

With many investments probably going to foreigners, the ideal of zero duty may just mean that Africa denies itself the much-needed resources if foreign investments find loopholes to not pay their due obligations.