The Huaxin Cement buyout of Maweni Limestone Ltd is dwarfed by Germany’s Heidelberg Cement which has moved to acquire 68 per cent shares of Tanga Cement, a significantly large player in the industry.

by Giza Mdoe
in Extractive and Energy, Tanzania
0 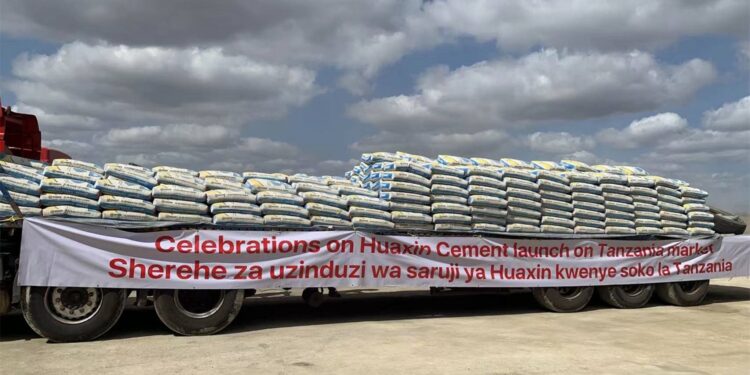 If there is a booming industry in Tanzania, it is the cement industry – an industry that has more than doubled in production in under a decade.

Compared to the previous year, the production volume of cement grew by 44.5 per cent and is associated with rising construction activity in the country.

Another marker of how well the industry is doing is the amount of investment the sector is getting annually. Consider the most recent buyout of Maweni Limestone Ltd by China’s Huaxin Cement.

Why this US$16million buyout attests to the industry’s performance is the fact that once operational, it will be China’s first African entity producing cement on the continent instead of exporting.

Local demand is estimated to have clocked 5.9Mt and growing fast.  The newly purchased plant by Huaxin Cement has already been upgraded to a production capacity of 1.6Mt/yr, again attesting to the industry’s potential. However, with numerous players in the industry, meeting internal demand is not the end game; export is centre-stage in almost all new investments in the sector.

In this regard, the Huaxin Cement buyout of Maweni Limestone Ltd is dwarfed by Germany’s Heidelberg Cement which has moved to acquire 68 per cent shares of Tanga Cement, a significantly large player in the industry.

Heidelberg Cement, one of the world’s largest integrated manufacturers of building materials, already owns the country’s largest cement producer, Tanzania Portland Cement, and the move to take over Tanga Cement only serves to expand its footprint in the region.

Tanzania Portland Cement (TPC) maintains outstanding performance to date. Only last year, the company reported a new sales record and it further reported anticipated growth of 7 per cent in the national cement market. TPC also reported that it has grown its operating profit by 20 per cent year-on-year to around US$46m in 2020.

To profitably produce cement you need to have access to limestone, the basic cement production ingredient. That is what the German company has done.  By buying majority shares in Tanga Cement, Heidelberg Cement has effectively secured a key limestone quarry. In fact, the quarry is estimated to have enough limestone resources to last for at least the next 30 years on top of its already existing reserves.

At this single site, the German miner which already has more than 3,000 similar operations spread across 50 countries will now wield the capacity of producing 1.3Mt annually.

Of course, we cannot speak of Tanzania’s cement industry without mentioning Dangote enterprises which boast 3.0Mt annual output at its Mtwara plant. Dangote Industries Tanzania Limited, a subsidiary of Dangote Cement, operates the largest cement factory in the country that has an annual capacity of 3.0Mt.

However, power shortages in the country have kept the plant below capacity and as a solution, Dangote Cement opted to build a coal power plant but Tanzania banned coal imports against the background of environmental reasons.

With power issues and Covid-19 related complications, including delay of equipment meant for maintenance of the new gas power plant, the company reported a decline in cement production for the first six months of 2020.

According to local media, the company sold a little over 520,000 tonnes of cement in that period, 4 per cent lower than the previous year.

That being said, the next highly anticipated new player in the industry is yet another Chinese firm, this time the China National Building Material Ltd. (CNBM). Although details as to how far these plans have developed remain vague when in place, the plant is expected to produce 7Mt/yr, far more than most of the other producers combined.

As mentioned before, estimated internal demand for cement in Tanzania currently hovers at 5.9Mt, which means, when completed, this single plant will over-supply the market. Not to worry though, the plant operations are hinged on production for export and not for the internal market.

News reports announced that ‘At least 70 per cent of the cement produced at the plant will be exported to neighbouring countries such as the Democratic Republic of the Congo (DRC), Uganda and Sudan, while the remaining 30 per cent will be sold in the domestic market.’

However, it is prudent to point out a warning issued by the media outlet Global Cement in its article titled, ‘Chinese expansion in East Africa’ that was released last year.  It read in part, “Cement producers in East Africa might do well to remind themselves what has happened in Egypt since the 13Mt/yr government/army-run El-Arish Cement plant at Beni Suef opened in 2018: the over-supplied market collapsed. Together with the Huaxin Cement purchase, once the CNBM project completes, Chinese companies will own the majority of cement production capacity in Tanzania.”

Another complication of this monster cement power plant is the question of how it will be powered. This mega cement production plant is supposed to be powered by another mega plant, this time a 1200MW coal plant.

Why should this power plant be of any concern? Well, the trouble is with its mode or power production.  The plant is to be powered by coal yet Tanzania has a ban on coal imports that came into place as of 2016.

Pundits’ review of the coal ban maintains, far from promoting national interests in the coal sector, the ban severely affected various sectors of the economy, especially cement and steel manufacture.  It led to a decline in cement production and a sharp increase in prices, even forcing some cement-makers to close operations  – “When good intentions turn bad: The unintended consequences of the 2016 Tanzanian coal import ban” (Science Direct Report April 2020, Extractive Industries and Society).

Well, it is not a matter to be too concerned about, because Tanzania has its own coal and as of 2020, and according to a Statista.com report titled ‘Production of coal in Tanzania from 2016 to 2020,’ “Tanzania produced nearly 690 thousand metric tons of coal. This amount is a decrease from the 712.1 thousand metric tons produced the previous year.”