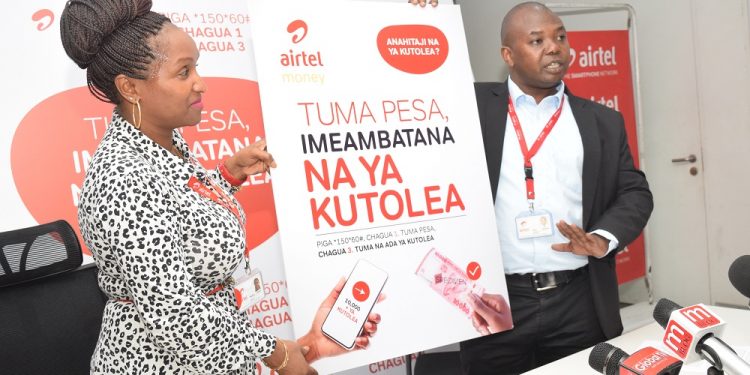 by Padili Mikomangwa
in Tanzania, Telcos
0
Share on FacebookShare on LinkedIn

Tanzania’s smartphone’s network—Airtel Tanzania, has ushered a new mobile money service branded “Send With a withdraw fee”, emerging with a rather customized competitive advantage within the growing mobile money industry in Tanzania.

The service which was launched on October 16, will enable Airtel Money customers in Tanzania, to send money to their counterparts differently compared to other networks, this time—all transactions will be executed with a built-in calculated sending fee, unequivocally offering a seamless service necessary for a mobile money take over, as elaborated by Isack Nchunda—Airtel Money Director, cited by The Citizen.

“Airtel commitment is to make sure that customers get the best services all the times, that’s the reason why we are continuing to surprise our customers, with innovative and best products and services,” he added.

The quarterly communications statistics showed that: more than $ 3.6 billion of transactions were executed in the second quarter. And yet, telecom services penetration hits 81 percent, thus Airtel Tanzania stands to draw more billions from financially excluded communities across Tanzania.

In that context, Tanzania’s National Bureau of Statistics (NBS), Household Baseline Survey 2017/18, point out that: 78 per cent of households in Tanzania own a mobile phone, while Financial Sector Deepening Trust (FSDT), 2017 Finscope Tanzania report, highlighted that almost 35 percent of savings were done on mobile phones.

With no doubt, these numbers are showing a steady growth in that respective fintech sphere, hence proving fintech in Tanzania is still ripe for further innovative and business development.

According to Nchunda, Airtel is committed to offer the best to its wide base customers, whereas the cash-out fee being automatically calculated via the USSD menu, is one of their unique solutions in fulfilling their promises, thus—Airtel Tanzania seeks to offer easy, affordable and reliable mobile money services to its customers.

Moreover, Airtel Tanzania Communications Director, Beatrice Singano complimented the latter, adding “With Airtel Money a customer can send money for free, thus, we have a cash out fee solution. We are proud with the level of transparency to our customers, hence, “send with a withdraw fee” will inform customers on the associated costs,”

Airtel Tanzania is rather ascending to a larger, but necessary competition with Tanzania’s telecom giant—Vodacom.

Hence, per TCRA quarterly statistics, until June—the network provider has 41 per cent share of mobile money industry and over $ 2.1 billion worth of transaction via its Mobile Money (M-Pesa), while Airtel Money gathered $ 532 million from mobile money transactions.

Airtel Tanzania stands a chance to draw more subscribers to its revitalized mobile money services but also to voice and data services inclusively. At present, the network has more than 1,000 branches and over 60,000 Airtel Money Agents national wide.