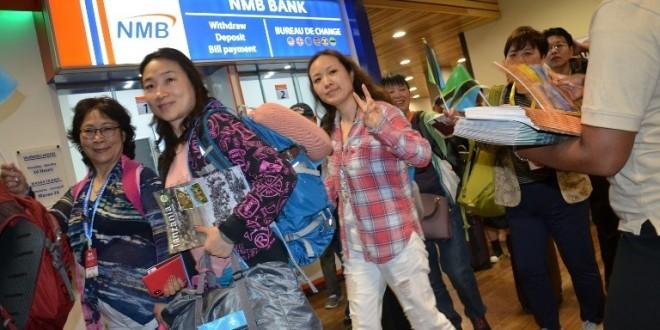 First batch of the awaited 1,000 Chinese tourists arrive in Tanzania

Less than a fortnight after a thousand visitors from the Middle East toured Tanzania, the country has just received the first batch of expected 1,000 tourists from the Far East.

Landing at the Kilimanjaro International Airport (KIA) on Sunday 13th May, 2019 evening, more than 350 tourists from China kicked off their itinerary by sampling Northern Zone attractions, including the Ngorongoro crater and Serengeti National Park.

They were received at the airport terminal by the Prime Minister, Kassim Majaliwa, who described the entourage as yet another indication that Tanzania is becoming a lucrative destination for visitors and investors from overseas.

The 10,000 visitors from China will be touring Tanzania through the `Tour Africa – New Horizon` program coordinated by Touch Road International Holding Group, which in addition to opening doors for tourists from the Far East, is hatching a new initiative where some visitors are going to identify potential areas of investments in Tanzania.

The arrival of tourists from China follows a deal inked last year between the Tanzania Tourist Board (TTB) and Touch Road International Group which organizes the tours through chartered flights.

TTB made a good presentation in China such that the country felt the need to open doors for its people to tour Tanzania, making the country top of the list in African itineraries.

China, the most populous country in the country in the world with about 1.4 billion people, usually has 120 million people visiting foreign countries each year. The agreement between TTB and the Chinese firm was signed during the 2018 China-Tourism Roadshow.

The roadshow started in Shanghai, proceeding to Guangzhou, Hong Kong, Chengdu and Beijing, with over 200 participants taking part at the opening ceremony, where the Deputy Permanent Secretary in the Ministry of Natural Resources and Tourism, Dr. Aloyce Nzuki attended.

Efforts by the Tanzanian Embassy in China in collaboration with TTB played a big role in attracting the large number of local participants in the Chinese roadshow event, including travel agents, tour operators, international airlines and media personnel.

Tanzania gets an average of 1.3 million visitors per year, but recent promotion efforts and the revival of the national carrier, Air Tanzania, is expected to far outstrip the figure by next year`s end, officials noted.

What can Tanzania learn from South Korea's tech innovativeness?