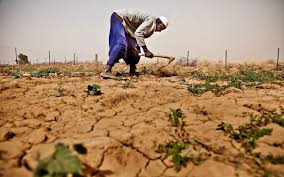 There is need for financial institutions to invest in smallholder farmers

By all accounts Africa should be feeding the world. Most of the continent is miles and miles of fertile land. Since most of Africa is on the equator or just a few degrees above, it experiences tropical weather that is characterized by two high rainfall peaks.

Faced with the adverse effects of climate change, the farmer no longer has predictable rain seasons. Instead, as is characteristic of global warming, weather patterns have changed. So it is actually no surprise that the African farmer cannot produce enough to feed himself, hence the continent’s food insecurity.

To make matters worse, even when weather is favourable and the farmer gets good harvest, he has limited access to storage, transportation and even market. African smallholder farmers mostly use old storage huts where the produce loses value due to pest infestation and poor storage conditions.

So even when the farmer does get his crop to the market, the produce is of little value and brings in little returns. Africa’s agricultural productivity is undermined by the smallholder farmer’s poverty; it is a cycle of poverty.

It is evident that the African farmer needs support to better produce, to be less rain- dependent and to reach larger markets. With support from African governments and the private sector, Africa can increase productivity.

Entities like the African Development Bank (AfDB) have the opportunity and responsibility to step in and invest in the productivity of the peasant farmer. Farming inputs like fertilizer and tractors are expensive which the smallholder farmer simply cannot afford.

However, with support of financial institutions, the farmer would be able to afford the inputs that are necessary to produce better but that alone is not enough. The farmer also needs the private sector to reach larger market within their countries and for export.

The project completion report was released earlier this year (27 February, 2020) and it showed amazing results that attest to the need for financial institutions to invest in the smallholder farmer.

“With US$56.8 million in funding from the African Development Bank, the programme was undertaken in 32 districts with a population of 6.1 million in 1.2 million households. Approximately 78% of beneficiaries reported improved incomes, rising from an average of $41 in 2012 to $133 in 2017” reports the AfDB.

“This increase is attributable to the sale of value-added products, improved access to markets, increased productivity, the use of improved techniques (including the System of Rice Intensification and the use of fertilizer and improved seed) and enhanced capacity to negotiate better prices,” explains the project team lead, Salum Ramadhan.

According to the bank, small producers and traders also gained greater access to agricultural markets, which cut their post-harvest losses of staple crops.

“One beneficiary, the Meru Dairy Company, recorded a nearly 85% spike in production: establishment of a cold room boosted the company’s milk-production capacity from 400 to 2200 litres,” he added.

By providing more than just farming inputs, the project also invested in transport infrastructure and as a result, ‘transportation costs on all refurbished roads dropped by an average of 20% to 50%. For example, the cost of transporting a bag of onions on the renovated road to Mang’ola market in Karatu fell from $1.30 to $0.22.’

In fact, transport times for produce harvested have fallen from an average of three-and-a-half hours to 56 minutes.

Downstream, the use of the programme’s warehouses has led to a sharp decline in post-harvest losses, from 57% to 15% overall.

According to a report from the project, despite challenges in terms of coverage, the programme has worked well thanks to the efficiency of communication with the district and regional liaison officers, and to the good relationships established with district and regional political and administrative structures.

“The successful implementation of the project is thought to have helped rural poverty reduction and economic growth, by improving incomes and food security. The project also complemented the work of government agencies by boosting access to markets and increasing the quantity of value-added agricultural products.” – African Development Bank.