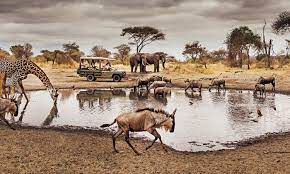 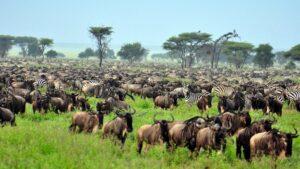 The Serengeti, home to the largest annual migration of over 1.5 million wildebeest and zebras making it your never-miss animal show on Discovery Channel, is in peril. For more than a decade now, human activity has interfered with the ‘cradle of mankind.’

This ‘Eden’ so to speak, is home to Olduvai Gorge where the oldest human fossil nicknamed ‘Lucy’ was found. The site remains an invaluable asset in furthering understanding of early human evolution and is believed to have been traversed by our upright walking ancestors, the Homo Erectus.

What our two million years old ancestors must have seen every year starting early May, is the migration of millions of wildebeest and with them a host of predators—a spectacle known affectionately as ‘The greatest Show On Earth’ that we awe at to date. It is for this reason that we owe it to our children and future generations to keep the sanctuary safe.

However, what does ‘safe’ mean? To start with, the Maasai, who named these plains Serengeti—as the name translates to “never ending plains” in the Maasai language—argue that it is their source of livelihood and has been for generations and generations, maybe even dating back to mama ‘Lucy.’

Now they are denied to hunt and graze in the plains in the name of saving the ecosystem, yet they have lived side by side with these animals and within the ecosystem from time immemorial in perfect harmony and balance. They defend their right to be in the Serengeti, but to no avail; there are others who want them out.

By others here, I mean, activists and the government and their argument is in the name of the ecosystem and the big chunk of cash they attract every year. The Serengeti is, after all, a global leading tourist attraction and is by overwhelming acclamation, voted the best African Safari Park.1

Growing Conflict in The Serengeti

However, as recent as last month, local media reports ‘Tanzania’s Serengeti District in the Mara Region is leading with incidences of human and wildlife conflicts involving elephants, lions and local communities, according to officials.’

That is the plight of the Maasai and other indigenous tribes living within and around the Serengeti.They cry foul as they are being pushed out so tourists can come see the animals! To them, this is unfair if not downright inhuman – remove humans so lions can roam? Or shall we say, remove locals so tourist can enjoy?

At a recent conservation workshop convened ‘to find solutions to the increasing conflicts pitting people and wildlife against each other in the district’ government officials said, “The government is doing everything possible to find lasting solutions to the problem.”

Principal Wildlife Officer from Wildlife Division in the Ministry of Natural Resources and Tourism, Antonia Raphael said the magnitude of the problem is overwhelming: man is encroaching into the park and animals are trespassing into the villages. Man is hunting and killing wildlife; wildlife is attacking and killing man.

I might come across here as cold or heartless, but has this not been the way of life time immemorial, since ‘Lucy’ fed her family in these very plains? The real problem here is human activities affecting the ecosystem, disrupting the natural way of life and in the process killing away the flora and fauna and starving the animals as a result.

It is argued that the communities are farming deeper and deeper into the Serengeti cutting and cultivating the Savannah away. As population increases so do their farming activities and more and more of the Serengeti falls to cultivation and grazing.

“The pressures on all sides of the greater Serengeti ecosystem have compressed wildlife into a smaller area consisting mostly of Serengeti National Park and a few adjacent nature reserves. The area routinely used by large numbers of wildebeests has probably shrunk to about half its original size,” warns Mark Ritchie, an ecologist at Syracuse University in New York State and one of the authors of a study on human and wildlife conflict in the Serengeti.

The study warns that ‘human pressures around the edges of the protected area may be harming the entire ecosystem, squeezing wildlife into a smaller area and depleting the richness of grass and soil.’

The research findings now suggest that ‘rather than focusing only on the core of an ecosystem, conservationists must find ways for humans and wildlife to coexist across much larger landscapes.’

Zebra Crossing: A Road across The Serengeti?

Coexist? Well, so far we have looked at the problem with focus on local communities, peasants and pastoralists and the effect of their agricultural activities. But what if we look at major national development activities that are central economic pillars?

Tanzania has for the last decade been planning and has started (in-part) to construct a major highway to connect the East of the country to the West cutting travel time of man and cargo by more than half the current time it takes to go around the park.

Yes, there you have it—the highway is to cut right through the Serengeti National Park.

Tanzania argues that the $500 million road project of which, 53 kilometres runs right through the Park, is vital for the country’s economic growth. The total length of the Serengeti Highway stretching from Arusha town to Musoma is 480 km and the government says it is key to increasing access to markets and in turn support national development initiatives.

As expected, activists will not hear of it. A road through the Serengeti?  This brings a whole new meaning to ‘Zebra Crossing.’ I could not resist the laughter, but, yes this is no laughing matter.The fate of the Serengeti is in peril, but not if activists have anything to say about it, and they do, legally speaking.

In 2010, the Africa Network for Animal Welfare (ANAW) opened a case against the planned highway in the East African Court of Justice (EACJ). Four years later, in 2014, the court ruled against construction of the proposed road deeming it ‘unlawful due to expected environmental impacts.’

However, nothing has been resolved; no lasting solution has been found. Farmers are still encroaching on the park and pastoralists are still grazing in the plains, and, the road might still be constructed.

So the next time you are at a Zebra Crossing, remember the Serengeti, the cradle of mankind, our ancestors’ home, and raise your voice to protect it #serengeti.