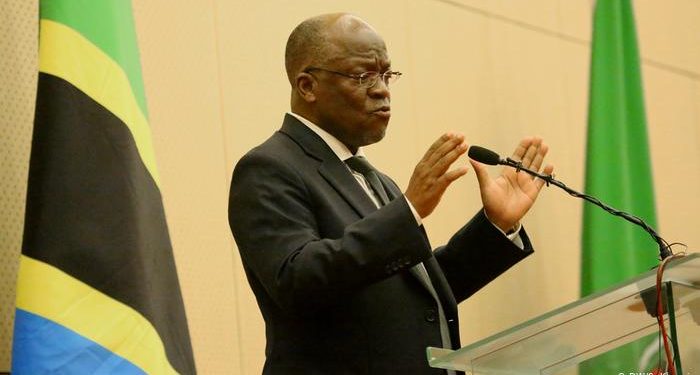 According to President Magufuli, the number of COVID-19 patients in Tanzania is shrinking to low levels, compelling him to even reopen universities.

Tanzania just stepped into a whole new ground in fighting the novel coronavirus (COVID-19) as president John Magufuli assured Tanzanians on stringent actions in safeguarding the economy, which is restricted by the virus. The head of state was addressing worshipers during a Sunday service in his hometown.

“We have had several viral diseases, including AIDS and Measles. Our economy must come first. It must not sleep. If we allow our economy to sleep, we will not receive salaries, church offerings will cease if we announce a lockdown, Life must go on,” he said

According to President Magufuli, COVID-19 cases have shrunk to low levels, compelling him to reopen universities and the football leagues. In March, the East African nation saw the closure of hotels, schools, universities, and other social gatherings–in response to curb the virus.

However, Tanzania has taken various measures to curb the virus and resuscitate the economy.

Hence the head of state argued that in most hospitals and isolation centres the number of COVID-19 patients shrunk significantly, with only six patients in Mloganzila Hospital centre.

“The figures in my hand show that at Amana Hospital, the number of Covid-19 patients had gone down from 198 to only 12,” he said.

As the president extinguishes the possibility of a lockdown, Tanzania has seen a rather challenging situation with its neighbours regarding border shutdown. At present Tanzania has 45 virus fight strategies underway nationwide.

Kenya—Tanzania’s close trading partner, attached Tanzania along with Somalia in its 21 days cross-border shutdown, to curb virus spread, as more Tanzanian cargo drivers get tested positive for COVID-19, according to information from the Daily Nation.

Following that context, there has been somewhat a developing reaction also on the other side, as Tanzanian authorities along the Kenya-Tanzania border points issued directives for Kenyan trucks not to cross over.

According to information from the BBC, authorities in Tanzania have restricted trucks from Kenya not to cross through the Holili border.

Further, Magufuli remained undeterred in kickstarting other portions of the economy, as he assured on the constant flow of economic operations including sustaining the longstanding cross-border food exchange, according to information from The Citizen.

“We share borders with about eight countries and if we close our borders, we will be destroying their economies. They get maize, rice, meant (because we lead in the number of livestock in the region) and milk from us. If we close the borders, you also close economic opportunities to people but more importantly, you deny food to those who depend on you,” he said.

Tanzania has been preparing its tourism industry for a cautious reopening amid the global virus fear, hence—president Magufuli also stressed on the reopening with no quarantine measures for tourists destined for its hotspots.

“As I am talking here, some airline operators are fully-booked – until August – with tourists who want to visit Tanzania. So long as their body temperatures do not show anything unusual, I will allow them to proceed and view Tanzania’s wild animal” he added

However, the Tanzanian president urged his countrymen to vigilant amid the crisis and sustain their workflow, and take necessary precautions against the virus. The ministry of tourism has already consulted with the industry stakeholders and prepared standard operating procedures to be adopted soon as the tourism industry reopens.

In the meantime, according to information from The Citizen, Zambia has reopened its Nakonde border with Tanzania for cargo after days of closure of the transit point for copper and cobalt exports and fuel imports, but people are not allowed to cross.