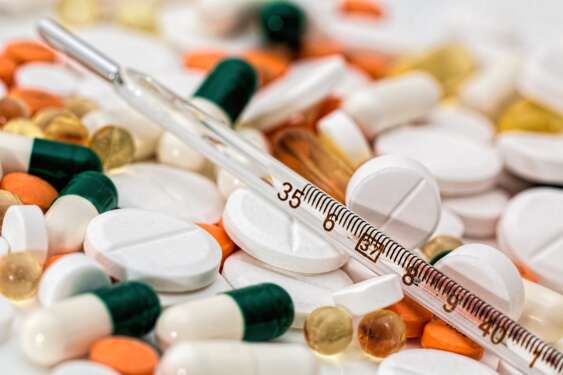 An array of drugs. Africa manufactures less than 2 per cent medicines it consumes spending approximately US$14.5 billion on importing pharmaceuticals from outside the continent annually. [Photo/UN]

The world has not experienced any tragedy-inducing phenomenon to its economy since the Second World War but now that time is upon us.

Covid-19 is however proving to be the wonder virus that will push the global economy into its deepest recession.

World Bank numbers showed that the global economy shrunk by 5.2 per cent in 2020 with its sister institution, the IMF, saying that the world economy has started to recover but warned that the return to pre-pandemic levels will be long, uneven, and uncertain.

Projections show that the African economy will not be spared and that economies should brace for tough times before they pick up if- and when- the virus is successfully managed. For starters, Africa will be among the last to receive the much-hailed Covid-19 vaccines meaning that much more will be delayed economically unless something divine happens.

The continent has so far managed to maintain low numbers for whatever reasons and there have not been huge and abnormal spikes which would put Africans out of the economic treadmill. However, the virus mutation which is leading to variants in different countries could become the game-changer for the continent.

Cases in the African region- excluding Morocco, Tunisia, Libya, Egypt, Sudan, Djibouti and Somalia-  have been increasing significantly since the middle of September 2020, according to the World Health Organization (WHO).

The UN body notes that Africa’s biggest challenges are in the lack of essential products like medical supplies, pharmaceuticals, Personal Protective Equipment (PPE) and test kits.

This is due to the fact that most African countries heavily depend on imports from outside the continent and without preferential treatment and procurement, these essential products will remain scarce. The unfortunate thing is that all African countries are net importers of medical and pharmaceutical products estimated at 94 per cent of all the continent’s imports by the UN Economic Commission for Africa (ECA).

But, despite all the uncertainty and with measures being enforced in different countries which is slowing down recovery, the continent has a silver lining in the African Continental Free Trade Area (AfCFTA) which finally began on January 1, 2021, marking an important milestone for African trade.

While it was delayed for about six months, the AfCFTA could bring a breath of fresh air to the continent’s economic recovery plan and path. With the agreement, harmonisation could not be more important than now.

With the trade agreement, the continent has to up its production game to ensure there are goods to trade in in the first place.

The United Nations Conference on Trade and Development (UNCTAD) notes that the economic crisis occasioned by the Covid-19 pandemic will reverse years of painstaking development progress in education and nutrition pulling 32 million people back into extreme poverty.

For a strong and resilient recovery from the pandemic, UNCTAD notes that productive capacities have to be drastically improved especially for the world’s poorest nations. Many of the Least Developed Countries (LDCs) happen to be concentrated in Africa. Thus, the AfCFTA can only be beneficial if these countries are able to pull their weight assisted by those that are already at the table to ensure that the trade agreement becomes a reality in pulling the continent out of poverty.

According to UNCTAD, productive capacities are the productive resources, entrepreneurial capabilities and production linkages that together determine the capacity of a country to produce goods and services and enable it to grow and develop.

Outgoing UNCTAD Secretary-General Mukhisa Kituyi says that the pandemic is a brutal reminder of the urgent need to develop productive capacities in LDCs for them to achieve structural transformation, reduce exposure to external shocks and build resilience.

He decries that the development of productive capacities in most LDCs has been too slow for them to overcome major development challenges and shocks such as Covid-19.

Covid-19 cases are definitely on the rise in Africa and ensuring availability and access to pharmaceuticals and PPEs is an urgent essential.

The production of pharmaceuticals on the continent is important given the need not only to tackle the pandemic but other local diseases since the continent is one of the fastest-growing in the world. There is no large external-bound investment in pharmaceutical companies in African countries meaning that the sector could benefit immensely if such investments come up to tap into the AfCFTA.

Through the AfCFTA, Africa has a great opportunity to boost intra-regional trade of pharmaceuticals and PPEs.

Currently, Africa manufactures less than 2  per cent medicines it consumes spending approximately US$14.5 billion on importing pharmaceuticals from outside the continent annually. With large scale investments in the sector, the AfCFTA can facilitate the creation of regional value chains in pharmaceuticals.

In addition, the continent boasts of a rich heritage of flora and fauna which is rich in medicinal properties and this can be leveraged to create African pharmaceutical multinationals.

The beauty of the AfCFTA is that it offers a huge market thus pharmaceutical manufacturers could immensely benefit from economies of scale offered by the trade agreement.

This could enable countries to pool together and engage in the local production of medicines which could meet the demand on the continent.

The AfCFTA is an unmissable opportunity for the pharmaceuticals sector which in addition to the free movement of pharmaceuticals could also benefit Africans from the exchange of technical expertise to produce generic drugs.

McKinsey and Company note that overall, Africa has roughly 375 drug makers with most of these concentrated in North Africa. These drugmakers are expected to serve a population of around 1.3 billion people.

In Sub-Saharan Africa (SSA), only Kenya, Nigeria, and South Africa have a relatively sizable industry. In these three countries, a few companies produce drugs for their local markets and, in some cases, for export to neighbouring countries.

McKinsey and Company add that most local producers in SSA play in a limited range of the value chain where they purchase active pharmaceutical ingredients (APIs) from other manufacturers and formulate them into finished pills, syrups, creams, capsules, and other finished drugs.

Others are limited to packaging, where they purchase pills and other finished drugs in bulk and repackaging them into consumer-facing packs.

In the entire SSA region, only three companies, two in South Africa and one in Ghana, produce APIs.

This underscores the need for the continent to ensure that it becomes self-reliant on drug production if it is to avoid falling into the trap of waiting to be served last even in times of pandemics and other pharmaceutical need emergencies.