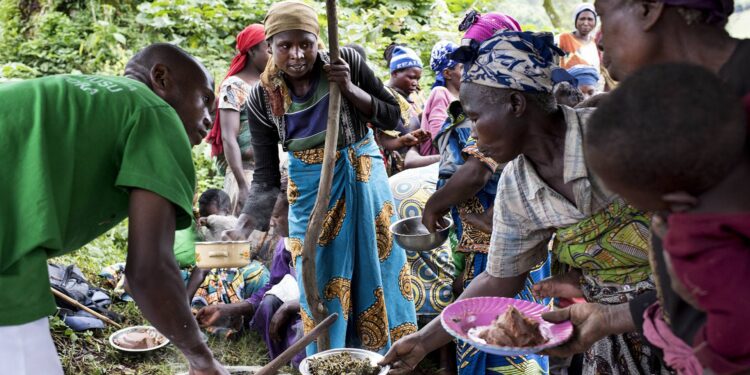 Another year of high expectations but broken promises in the DRC. [Photo/Global Hunger Index]

by Joseph Kangethe
in Africa, Economic Growth
0
Share on FacebookShare on LinkedIn

The population in the Democratic Republic of Congo (DRC) will see another year of high expectations and broken promises.

The DRC is facing one of the deadliest and longest-running civil war crises. The wars have been mainly built on land, resources, and power, significantly affecting the country’s economic status. DRC is the country that has the most displaced people totalling more than 5.5 million people.

According to the World Bank, DRC ranks the 11th poorest nation with a GNI per capita of $550 in the latest purchasing power parity analysis. Ironically, it holds one of the largest potential wealth reserves, including metals like diamonds, gold, copper, cobalt, zinc, and coltan. These metals are essential in the international metal trade and electronic gadgets, especially mobile phones.

Despite DRC’s economic advantages, the 2021 United Nations Human Development Index states 73 per cent of its population lives in extreme poverty.

It is imprudent to say that the country is not creating a fortune from its vast wealth. Still, the resources are excessively plundered by its leaders, colonisers, private interests, neighbouring countries and internal warring factions. The country is living in uncertainties of a brighter and economically friendly future.

The precariousness of the 2023 elections heightens uncertainty in the Democratic Republic of Congo.

Elections derail the progress of the DRC

The upcoming elections in 2023 amass a great deal of fear to the larger population because of the high public spending that comes with the elections. In 2018, the elections were postponed a couple of times, which created tensions for business, foreign trade, and investments.

Political analysts fear the situation might happen again next year. Previous elections have been accompanied by protests and a chunk of conflicts, with armed groups taking advantage of attacking people during that time.

There has also been a bill to exclude those not born to Congolese parents from high office (though rejected), which might intensify ethnic tensions and delegitimise the 2023 general elections. The bill appeared to be a plan by President Felix Tshisekedi’s administration to protect his ambition to run for a second term.

Previous presidents have also had a track record of enriching themselves once they get into power. Mobutu Sese Seko embezzled more than 4 billion euros in his 32 years of power. Joseph Kabila took over and amassed more than 13 billion euros. The selfishness of these leaders has abandoned the efforts to halt the civil war crises in the country.

Civil wars stand up a fight against the agricultural sector, which can become a global agricultural power if the arable land in the country is put to optimal use.

Effects of the Civil war on Agriculture

The agricultural sector is not entirely in the mud as it employs more than sixty per cent of the Congolese population and contributes to 19.7 per cent of the gross domestic product. The main cash crops produced include maize, coffee, cotton, cassava, tea, sugar, groundnuts, rice, palm oil, plantains, rubber and cocoa.

The Global Research Development Centre is encouraging the development of agriculture by supporting the construction of new and expanding the existing agro-industrial parks in different regions of the DRC. The rivers and lakes in the country also provide a convenient environment for large scale fishing.

The conflicts in Congo, the Coronavirus pandemic, economic decline resulting in increased food prices have adversely affected food security in the country. According to ReliefWeb, the population experiencing acute food insecurity will rise from 6.1 million people last year to over 27 million in the first quarter of 2022.

Concern Worldwide reports that out of the ten hungriest countries globally, the DRC ranks fifth. Five territories in the country have been classified as emergency states.

Women and children also experience malnutrition. According to the Integrated Food Security analysis, approximately 860,000 children below five years and nearly 470,000 pregnant or lactating women are likely to suffer from acute malnutrition this year. The Analysis added that more than 200,000 children are experiencing severe malnourishment and need urgent treatment.

Continued armed conflict has killed, wounded or traumatised farmers, burning and destroying crops in their farmlands, reducing production significantly. The civil wars have left farmers under fear, which repulses them not investing in agriculture in the country.

Despite the instability in the country, mining operators are still making a fortune from the mining sector.

The sleeping potential of Mining in the DRC.

Significant security risks are associated with mining in the DRC. The country has no less than 600 millionaires, most of whom have made their wealth by mining natural resources and raw materials.

Rebel groups continue to be more lethal as they also fight for a share in the mineral resources. The UN has stationed more than 16,000 peacekeepers, but they have not been able to suffice the situation in the country.

The DRC has untapped gold, and cobalt and boasts of the highest quality copper reserves globally, but poor road connections and high levels of insecurity neutralise the high-income potential.

The total mineral estimated wealth stands at tens of trillions of dollars, income enough to pay the outstanding debt of the DRC and create employment opportunities for 65 per cent of the Congolese population.

Mine operators continue to invest in the hope that conditions in the country might improve in the future. The biggest challenge to mining and agriculture is electricity connectivity and the country’s road systems.

Most of the country is inaccessible due to poor roads, including those in Kinshasa, the capital city. The UN reports that there are only about 2,254 kilometres of tarmacked roads in the DRC and 14,484 kilometres of unpaved roads, which are primarily impassable during the rainy season.

Humanitarian aid is struggling to get through due to inaccessibility caused by impassable roads, insufficient funding and insecurity. Armed groups have also destroyed roads in the country to prevent the military from launching a successful attack in areas where they have dominated.

The terrain and the equatorial climate of the Congo basin also present significant barriers to road and rail construction. Long-distance travelling in the DRC is dangerous due to poor roads and insecurity, making movement almost impossible.

Despite the poor penetration, the DRC has many potential sources such as natural gas, oil, hydroelectric, biogas, geothermal power, solar and uranium. Lack of access to electricity in most areas has impaired health, education, and businesses hindering income generation of Congo’s economy.

Mining companies fund most of the power generated in the country to support their mining activities. President Felix Tshisekedi is seeking to increase the electricity connectivity by mandating electricity companies to provide power to the vast population and seeking development funding from international partners.

Academic institutions in the DRC have created centres to research and develop renewable energy sources. Power Africa, a US-based electricity company, seeks to double access to electricity in sub-Saharan Africa.

More than half of the 90 million Congolese lack access to clean water, essential to combat diseases such as Ebola, malaria, cholera, typhoid and measles. Malaria booked over 40 per cent of all outpatient visits and more than 19 per cent of deaths for children under the age of five years.

On December 27, 2021, the DRC and the World Health Organization launched a cholera vaccination campaign targeting two million people aged one year and above to halt the ongoing outbreak.

The economic outlook for the country for 2022 looks very promising if the pandemic is controlled and global demand recovers. The real GDP is expected to rise by 4.5 per cent in 2022, driven by higher prices for significant mining products.

IMF Chief, Kristalina Georgieva, said that the economy is expected to grow 6.4 per cent this year. The recovery in the extractives sector is expected to boost mining exports and improve earnings in exports.

President Tshisekedi’s government has been pursuing reforms to improve the economy and develop the mining sector in the country.