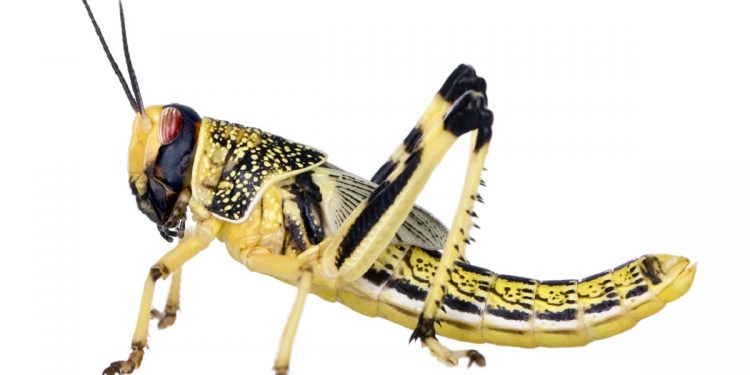 A desert locust larva. FAO predicts that wet weather conditions in Sudan will determine if the locust will get to West Africa.

Locusts have been classified as the most dangerous migratory pests by the UN-FAO and after devastating parts of East Africa, they could be heading to West Africa.

However, there is hope that reduced rains in Sudan could halt their migration to West Africa.

According to FAO’s Locust Watch, the threat of an invasion by swarms that are expected to arrive in Sudan from northwest Kenya is declining because the swarms have not left Kenya yet and good rains have fallen in the summer breeding areas of Sudan.

“In this case, any swarms that do arrive in Sudan are more likely to stay rather than continuing further west to Chad and beyond. Ground teams are monitoring the situation closely in Chad. Continued vigilance, preparedness, and increased surveillance remain paramount,” notes FAO.

The larger Eastern Africa region including Somalia, South Sudan, Kenya and some parts of Tanzania have experienced the desert locust invasion risking the livelihoods of an estimated 25 million people who were already severely acutely food-insecure.

With this aftermath, the UN-FAO had warned that the desert locust could be heading to West Africa urging for taking precautionary measures and preparatory steps to fight the pest.

The unpredictability of climate change, however, could just pull a surprise and see the pests heading to West Africa.

FAO’s latest update says that large numbers of desert locust swarms that have formed in Kenya and Ethiopia since January could move west in the coming weeks. With this migration, FAO says that fields, pastures and livelihoods in West Africa are threatened.

However, FAO assures that national surveillance operations are in full swing and control measures are ready because of the major early warning and rapid response effort coordinated by the UN body.

According to FAO’s Resilience Coordinator for the East Africa region, Coumba Sow, said, “We have witnessed the unprecedented Desert Locust threat to food security and livelihoods in East Africa, and we are doing everything we can to prevent a similar crisis repeating in the Sahel region, which is already experiencing several ongoing crises.”

There could be an even better response in West Africa since the tried and tested methods in fighting the pest need not be reinvented.

Digital solutions have become handy since FAO fast-track a new mobile app development to help with the situation in East Africa and in other regions in Asia.

Released in 2015, eLocust3 enabled FAO to record field observations and transmit the data to the National Locust Centre in real-time via satellite.

The new iteration, eLocust3M, is widely accessible to larger teams and the broader community.

According to FAO, swarms that were bred in East Africa early this year are now shifting to the warmer breeding areas.

“These countries west of the Horn of Africa should remain on high alert. Most of the swarms in northwest Kenya are expected to ride winds carrying them north to cross South Sudan into Sudan. Unless it rains more in Sudan’s desert, providing favourable breeding conditions for the pests, the locusts will not stay in Sudan for long and would instead move west through the Sahel of West Africa in search of food and favourable breeding areas,” adds FAO.

These important monitoring efforts contribute to FAO’s global early warning system that keeps countries and partners informed of the current situation and the latest forecasts.

FAO notes that teams in Chad, particularly, are closely monitoring the situation because the country neighbours Sudan and is the front line of defence against a possible locust invasion in West Africa.

“As part of FAO’s work, helicopters are being deployed to Chad for surveillance, and drones will be used in hard-to-reach or insecure areas in Chad, Niger, Mali and Mauritania. Two operational bases have also been established in Chad and Mauritania, which are ready to launch control efforts to fight locust swarm infestations,” adds FAO.

In readiness for the invasion, FAO has carried out training sessions in Burkina Faso, Chad, Mali, Mauritania, Niger and Senegal on the safe and effective use of pesticides.

In East Africa, the swarms were so dense that in they took an Ethiopian plane off course. FAO said at the time that this could have been the worst case of locust outbreak in decades.

In China, a bioweapon was fronted as a possible response to a locust menace in Pakistan.

China was planning a deployment of 100,000 ducks by June this year depending on the outcome of a trial in Xinjiang.

Lu Lizhi, a senior researcher with the Zhejiang Academy of Agricultural Sciences was quoted by the TIME saying that ducks can be more effective than pesticide.

With desert locusts wreaking havoc not only in Eastern Africa, South Asia is also experiencing the same problem where the hoppers are destroying crops and pastures.

Pakistan’s largest producing regions were suffering from the locust invasion threatening the already fragile economy. The pest is also said to be migrating into India.