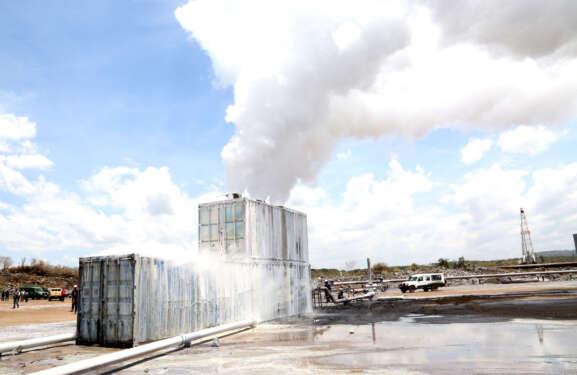 Currently more than 39 per cent of Kenya’s electricity comes from hydropower according to the 2015 data by the government.

by Kawira Mutisya
in Energy
0
Share on FacebookShare on LinkedIn
Kenya’s significant energy demand falls short with the lack of stagnated supply as current generation is insufficient with the burst of industrial and domestic needs, a recent research has said.

The study by the African Development Bank (AfDB) shows that the country is currently experiencing inadequate electricity generation capacity. Kenya is also grappling with high-power bills. This situation has therefore pushed the government to scout for alternative ways of resolving these problems.

Currently more than 39 per cent of Kenya’s electricity comes from hydropower according to the 2015 data by the government. The situation is particularly difficult during the summer months when water levels are low. Capacity gaps are then compensated by expensive thermal generation based on fossil fuels.

In Kenya currently according to Global Petrol Prices, the price of electricity stands at $0.206 per kWh for households and $0.164 for businesses. This price includes all components of the electricity bill such as the cost of power, distribution and taxes.

The current energy production capacity in the country is 1,429 megawatts (MW) against a demand of 1,600MW. This demand is projected to spike to 2,600-3600MW by the end of this year. Currently, electricity supply is predominantly sourced from hydro and fossil fuel (thermal) sources. This generation energy mix comprises 52.1% from hydro, 32.5% from fossil fuels, 13.2% from geothermal, 1.8% from biogas cogeneration and 0.4% from wind, respectively.

A shift to alternative sources of energy such as geothermal power which is environmentally friendly and more affordable to run compared to other sources of energy like fossil fuels  is expected to insulate the country against the effects of draught, which often interferes with hydroelectric power, one of the major sources of installed power.

It is due to this notion that the AfDB decided to fund the construction of the Menengaï geothermal plant, which is now helping half a million households overcome severe electricity shortage.

Over the past six years, Kenya has more than tripled production, from 198 to nearly 672 MW, becoming Africa’s leading producer of geothermal energy in the process.

The commissioning of the Menengaï geothermal power plant enabled the country to eliminate its electricity deficit to overcome the severe shortages it experienced in the late 2000s. The Menengaï Geothermal Development Project, with $108 million in funding from the African Development Bank, then added 105MW of geothermal production capacity to the national electricity grid, with participation by three private companies.

According to AfDB, for the implementation of the plant, 50 wells were targeted to generate enough steam to produce more than 100MW. Some 49 wells had been drilled through the end of November 2019, with a capacity of 169.9MW. The results exceeded the initial estimated capacity. In addition, CO2 emissions are expected to be reduced by 600,000 tonnes from 2022.

The construction of the power plant benefits about 500,000 Kenyans, including 70,000 in rural areas of the country, as well as businesses and industries. More than 600 jobs have been created.

“The ultimate goal of the project was to help Kenya overcome severe electricity shortages caused by variability of hydropower generation, which forced the country to resort to expensive backup thermal production between 2011 and 2012, and which continued through 2018,” according to the AfDB’s project completion report.

According to a report by the World Bank, Kenya now boasts the highest electricity access rate in East Africa: total access stands at 75 per cent both from grid and off-grid solutions, according to the recent Multi-Tier Framework Energy Access Survey Report by released by the World Bank.

Provision of adequate, affordable, and reliable electricity supply will be an important supplement to the investments in health and education guided by Kenya’s Vision 2030 to help Kenya move up the index. Achievement of the Big Four Agenda – enhanced manufacturing, food security and nutrition, universal health coverage, affordable housing – are all dependent on adequate energy supply.The World Bank is also supporting the government’s efforts to provide electricity to 1.3 million people in remote rural areas in Kenya’s underserved counties through off-grid solutions.

To achieve this ambitious and transformative plan, Kenya has turned to the African Development Bank as one of its preferred financial partners. The Kenyan government is also working to rapidly increase electrification rates in both urban and rural areas. As part of its national Vision 2030—to create a globally competitive and prosperous nation with a high quality of life by 2030—Kenya aims to grow rural electricity access to 40 per cent by 2024. The low rural electrification rate of 6.7% requires grid extension and electrification projects in remote areas of the country. Kenya’s Rural Electrification Authority is concentrating mainly on the expansion of greenfield photovoltaic (PV) mini-grids and on retrofitting existing diesel-powered mini grids.

The Energy report Kenya by the ministry of foreign affairs shows that Kenya has promising potential for power generation from renewable energy sources.

“Abundant solar, hydro, wind, biomass and geothermal resources led the government to seek the expansion of renewable energy generation to central and rural areas. There are many interesting opportunities in Kenya regarding renewable energy. Despite the fact that already many serious players are active in Kenya, the market that remains to be served is enormous. Compared to other African countries it is rather easy to do business in Kenya”.

Why do we award insurance companies?