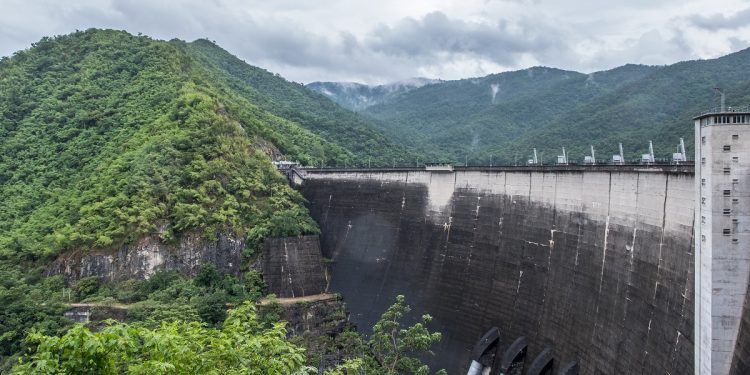 A large arch concrete dam. There are several power generation projects planned to increase access to electricity in Africa.

We have heard stories of Africa’s immense wealth in natural resources but we can’t comprehend it until we start looking at them critically.

With the continent that is majorly in darkness due to the lack of access to electricity, tapping into power generation can somehow open our eyes to how well-endowed the continent is.

Going against the grain and moving away from what the rest of the world calls aid, the continent is so vastly rich that its water resources alone are enough to power it entirely and even have surplus for export beyond its boundaries. This is not to mention the aquifers that the continent boasts of. In addition, the solar power potential if fully tapped could be the source of reliable clean energy making even the cleanest energy nations envious.

According to the Brookings Institute, the continent’s biggest three deadly deficits are education, electricity and taxes. It is almost impossible to run a business without power which makes it hard for the continent’s small businesses to realise their full potential.

The electricity deficit in Sub-Saharan Africa (SSA) is a conundrum since the region is rich in energy resources. So power-starved is the region that the 2017 World Energy Outlook report showed that more than half of SSA’s population did not have access to electricity in 2016.

This number stood at 588 million people in Africa alone while the global total estimate was 1.06 billion people living without access to electricity in the same period.

The reality is that many facilities cannot effectively run without electricity. These include schools, hospitals, and other infrastructure that requires electricity. The results are a limited education, suppressed businesses and limited government tax collections.

SSA’s power sector is underdeveloped with energy access, installed capacity and overall consumption falling way below the demand. Africa’s urban areas have an electrification rate averaging 71 per cent while rural areas are at 23 per cent. This means that two out of three Africans still living in rural areas bear the brunt of this lack of electricity.

But the narrative is changing and the continent is primed for a revolution in the sector that could transform its Dark Continent moniker.

Benin, a least developed country in West Africa, is a beneficiary of the Gas-West African Power Pool –Domunli Regional Power Project. The power project involves the construction of a 450 megawatt combined cycle thermal power plant which will inject some of its energy into Benin’s grid.

A majority of Beninese live along the small southern coastline of the Bight of Benin.

Also read: How the Congo River could power Africa

The country has four main electricity sector governmental actors while many private sector actors are engaged with solar products and installations.  With the injection of power from the Gas-West African Power Pool, the country’s power supply could become more reliable spurring economic activity and the general welfare of the country.

The Ghana/Volta River Authority (VRA) sponsored project will also benefit Nigeria where it is intended to make use of the Jubilee gas fields.

Still in West Africa, the Noumbiel Multipurpose Dam which has a hydropower generation component will benefit Burkina Faso and Ghana.

For Rwanda, Burundi and the Democratic Republic of Congo (DRC), the Ruzizi III hydroelectric power plant promoted by CEPGL has a capacity of 145 MW. The three countries will share the power generated here improving their universal electricity access targets.

Burundi, Rwanda and Tanzania will also benefit from the Rusumo Falls hydropower production plant which is expected to generate 61 MW.

The DRC is also expected to benefit from the Hydro-Inga III Basse Chute (BC) Hydropower Project. This project involves the construction of a 4,800 Megawatt hydropower plant-associated high-voltage transmission lines.

In addition, the neighbouring Bundi Valley will have an intake of part of the Congo River water which will culminate in the building of a dam across the same valley to allow impoundment of the diverted water. The project will not have a dam constructed on the Congo River itself.

Another project that will benefit the DRC is The African Interconnection Transmission Line Project. This entails the construction of a 3,800-kilometre transmission line system from the DRC to South Africa through Angola, Gabon and Namibia.  To the north, Equatorial Guinea, Cameroon and Chad are beneficiaries of this transmission line.

The African Union Development Agency (AUDA) says that a Euro-Mediterranean electricity network is under development. This network is primarily made up of high-voltage direct current transmission cables. Beneficiaries of this energy project are Algeria, Niger, Libya, Tunisia, Morocco, Egypt and Chad.

The 128 MW capacities Sambangalou Hydropower Project will benefit Guinea Bissau not only with power but also with a 185 square kilometre reservoir (4 turbines of 32 MW each). It was originally formed as part of a larger Gambia River Basin Development Organisation (OMVG) Project, which entailed an interconnecting power grid with the Kaleta Dam in Guinea.  This project which is 930 km from the mouth of the Gambia River will also benefit the Gambia, Senegal, Guinea and Guinea Bissau.

Sierra Leone is a beneficiary of the 2,000 km West Africa Power Transmission Corridor once the line along the coast is completed. It also connects with the existing Ghana–Nigeria line with a capacity of 1,000 MW.

In Mauritania, the Boulenouar Wind Power Project will see the construction of a 100 MW large-scale wind farm, 80 km north of Nouadhibou, the second-largest city in the northern coastal region of Mauritania.

This is the first major wind project in the Sahel and it will create a demonstration effect in the region.

Mozambique’s Mphanda Mkuwa Hydropower project will inject 1500 MW into the country’s energy mix. The project will see the construction of a hydropower station in Tete province along the Zambezi River. It is 61km downstream from Cahora Bassa.

The proposed 2,400 megawatts Batoka Gorge Hydroelectric Power Station is planned along the Zambezi River between Zambia and Zimbabwe. It is meant to ensure access to affordable, reliable, sustainable and modern energy and enhance the socio-economic development of the two countries in the SADC region.

Read: Global off-grid solar market surge, what next for Africa?

How well are you prepared for pay cut amidst the Global pandemic?