The top US diplomat will visit Senegal, Angola and Ethiopia with conversations going beyond security as the US seeks to broaden its trade relations with African countries

by Kimani Chege
in Industry and Trade
0 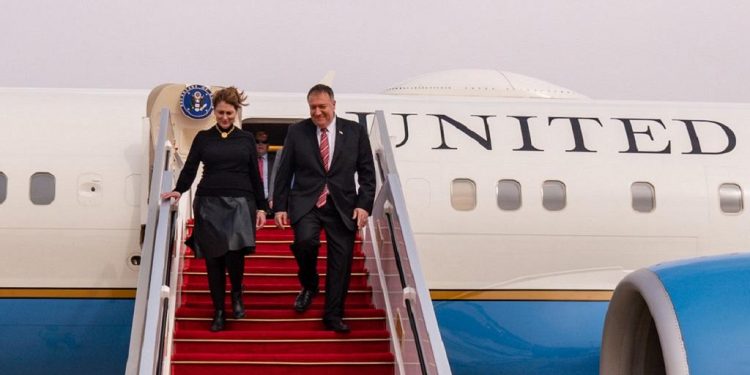 The visit by US Secretary of State Mike Pompeo to three African countries of Senegal, Angola, and Ethiopia is significant for the Trump administration not only as of the first trip the senior official has made to the continent, but a first for a senior official since the launch of the new strategy for Africa. The last time a senior official to visit sub-Sahara Africa was Pompeo’s predecessor, Rex Tillerson who lost his job while on a trip to Kenya.

Trump’s Africa Strategy was aimed at promoting prosperity, security, and stability in relations, and the business-friendly Prosper Africa which aims to substantially increase two-way trade and investment between the United States and Africa.

The leading issue will mainly be on security and counter-terrorism efforts mainly in the Sahel as well as the horn of Africa. Though Somalia has remained a point of discussion in terms of security, there is a rise of a new threat in the Sahel with the rise of terror-related incidences in Niger, Mali, and Mauritania.

However, with an increasing significance of US trade with Africa, Pompeo is pushing for the support of the Free Africa Trade Area which builds a large market for American products as well as for Americans running their business in Africa.

The top US diplomat will also visit Angola, a country that is struggling to overcome state-sponsored corruption, which has watered down the effects of an oil-driven economy. The country also faces major Chinese onslaught as the Asian country rush to control infrastructure projects. After both Senegal and Angola visit, Pompeo will head to Ethiopia, a country of over 100 million people which is initiating new reforms to its economy and politics, which has earned the Ethiopian Premier Ahmed Abiy a Nobel Peace prize.

While in Senegal, the Washington Post has reported that Pompeo met with business leaders in Dakar as well as had a long meeting with the Economy Minister of Senegal. He also announced the construction of a 100-mile highway,  move that signifies the return of the US to the infrastructure business in Africa. A similar project is being mooted in Kenya.

The Prosper Africa initiative proposes that the US improves the relations it has with African countries to provide an alternative development path to that taken by Russia and China in the continent.

Read also: Trump’s US late to the Africa Rising party

Chinese two-way trade with Africa is approximately three times that of the United States, valued at $148 billion in 2017 versus $55 billion, according to the Center for Strategic and International Studies (CSIS) a bipartisan, nonprofit policy research organization dedicated to providing strategic insights and policy solutions to decision-makers. From 2013-2017, China provided $87 billion in loans to Africa, for an average of over $17 billion per year.

He says if successfully implemented, the AfCFTA will contribute to the United States’ prosperity by offering unique opportunities for expansion of businesses and contributing to job creation in the United States, while also advancing Africa’s prosperity.

” The AfCFTA creates a vast market for U.S. goods and services and could harmonize policy and regulatory regimes, meaning that the same rules will be implemented at the continental level, to reduce the cost of transactions. Unsurprisingly, most U.S. corporations and trade actors doing business with Africa have shown strong interest in the successful implementation of the AfCFTA.”

Earlier this month, the U.S. trade representative announced the beginning of talks between the United States and Kenya on a bilateral free-trade agreement, which would be the first for a sub-Saharan African country.

Pompeo visit also comes at a time when the US administration has issued a new directive on the issuance of immigrant visas to four African countries including Tanzania, Sudan, Eritrea and Nigeria. This has been received with opposition in the four countries as it is seen counterproductive to the spirit of the Prosper Africa Initiative.

Read also: How China plans to beat US in capturing Africa