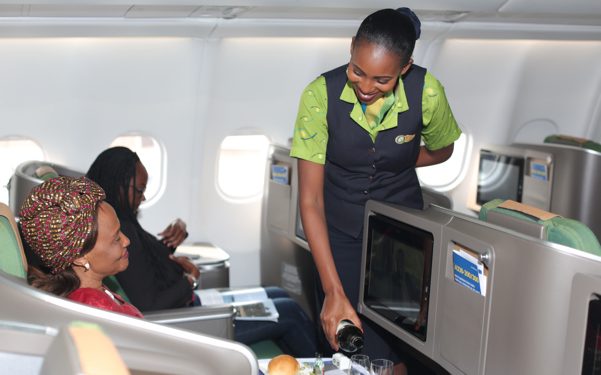 Flying Business class on RwandAir. Kenya has over 50 private airlines operating locally and internationally, according to the International Air Transport Association (IATA). [Photo/RwandAir]

Kenya has over 50 private airlines operating locally and internationally, according to the International Air Transport Association (IATA).

Kenya has over 50 private airlines operating locally and internationally, according to the International Air Transport Association (IATA).

The aviation industry in Kenya has recovered from the COVID-19 pandemic that led to the halting of operations as planes were grounded to curb the spread of the virus.

In Kenya, local airlines were not spared, but the resumption of flights provided a ray of hope.

List of private airlines in Kenya and their owners:

According to its website, it was the first airline to fly into the Maasai Mara, Lake Turkana region, Lamu and Diani.

IATA noted that the airline has nine aircraft that provide scheduled flights in Kenya and the East African region.

“Our charter operation can fly passengers the length of Africa, from Egypt in the north to Zimbabwe in the south. We also offer charter flights to all coastal destinations,” the airline stated.

It’s owned by a Kenyan-controlled consortium with Italian Dino Bisleti serving as its general manager.

With over ten aircraft, the airline provides cargo and passenger services.

Skyward Express was founded in 2013 by licensed pilots Mohamed Abdi, Issack Somow and other investors. It initially started the business with one plane- a Fokker 50 but has since expanded.

Its destinations from Wilson Airport in Nairobi include Mombasa‚ Lamu‚ Eldoret Lodwar‚ Diani/Ukunda, and Malindi.

Safarilink Aviation is based at Wilson Airport, Nairobi. It operates 14 aircraft ranging in size from 13 to 52 seats.

The airline was established in 2004 by John Buckley and Anu Vohora. Buckley was at the company’s helm for 16 years until 2020, when he handed over to Alex Avedi.

Fly540 was established in 2005 by Don Smith and Nixon Ooko. The airline started operations in November 2006 within Kenya airspace.

In 2010, it expanded its operations internationally, with services flying to Tanzania and South Sudan. Its planes operate from the Jomo Kenyatta International and Wilson Airports.

The regional airline was founded in November 2009 and provides passenger and cargo services to African countries. It’s based at the Jomo Kenyatta International Airport (JKIA).

Bluebird Aviation opened its doors in 1992. It caters for humanitarian, private and government institutions.

Farah serves as the chairman and chief executive officer, Unshur, the general manager, while Adan holds the technical director’s position.

The local airline began operations in 1996 with a single Cessna 402. Its main hub is the Moi International Airport in Mombasa, while Wilson Airport is its other hub.

From a single plane, it has expanded to a fleet of three comprised of Let L-410 Turbolet, model E9 and E20.

Peter Ndavu and Peter Mwaura are its directors.

Mombasa Air Safari was formed in 1974, according to its website. It operates small and medium size turboprop aircraft within East Africa and the Indian Ocean Islands.

It is based at the Moi International Airport in Mombasa and has a passenger lounge at Wilson Airport.

Mohammed Harunany leads the airline as CEO and Christine Cronchey as commercial manager.

Meg Whitman: US appoints one of the richest Americans as Kenya's ambassador