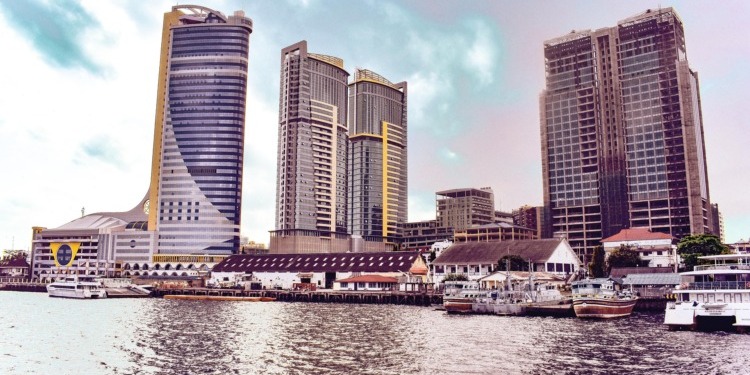 The central bank of Tanzania released its monthly economic review report on 11 November, for October 2021, and it depicts the economy to be stabilised, despite a few sectors showing some decline in performance.

On this crucial sector of the economy, the report noted that inflation remained within the target of 3.5 per cent for the years 2021 and 2022. While, on twelve-month inflation was 4 per cent in September 2021, from 3.6 per cent in June 2021.

Further on inflation, the report argued that core inflation which accounts for 73.9 per cent of overall CPI, ascended to around 4.6 per cent from 4 per cent, favoured by transport, clothing and footwear, accommodation, sports and culture.

As Tanzania GDP stands at 4.3 per cent for the second quarter contributed highly by the agriculture sector, food inflation has remained broadly unchanged ranging from 3.6 per cent and 4 per cent between August and September 2021, attributed to low prices of food crops. 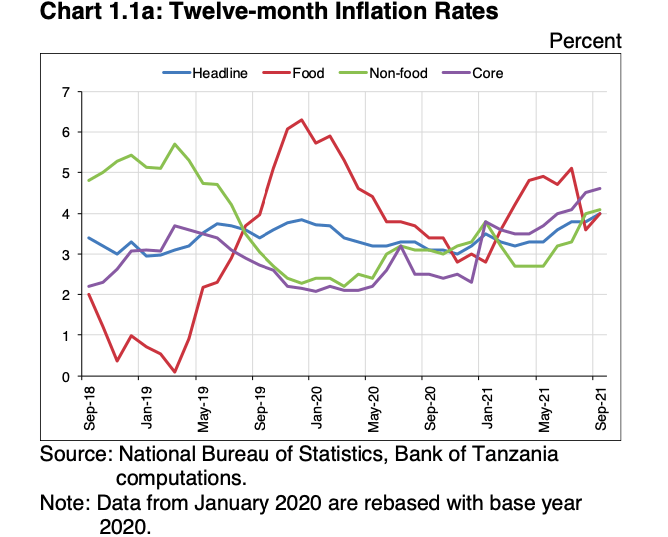 There is good news from this portion of the economy, as the review noted that, private sector credit growth took a slight rise to 4.6 per cent up from 3.2 per cent in the last month.

The bank argued that measures put out by the bank in July 2021 and the global rebound are considered to be factors towards the increase of credit to the private sector, which contributes greatly to Tanzania’s economic performance.

Tanzania has seen its banking industry grow significantly over the past decade, thus in the report, the interest rates charged on loans and offered on deposits by banks to customers remained broadly in September 2021(Bank of Tanzania).

Hence, the progressing measures rolled out by the bank are expected to reduce the cost of “loanable funds”.

Over the past five years, Tanzania has been one of the East Africa countries with a very high revenue collection profile.

According to the review, revenue performance has remained in line with the set target for 2021/2022.

“In September 2021, domestic revenue collection was $840.2 million of which central government revenue amounted to $815.8 million. During the month under review, tax revenue amounted to $692.1 million, whereas non-tax revenue was $123.7 million. Good performance was observed in income tax and taxes on imports signalling a recovery in economic activities” the bank report noted.

On another note, the review mentioned that, expenditure continued to be aligned with available resources.

Tanzania owes a good number of millions of dollars to considerable lenders across the world.

In this context, the report argued that, at the end of September 2021, the national debt stock stood at more than $33 billion, recording an increase of $101.3 million and more than $3 billion from the levels recorded in the preceding month and corresponding month in 2020.

On the other side of the fence, the report noted that the stock of external debt which is both—public and private, stood at more than $26 billion at the end of September 2021, an increase of $586.8 million and $3.01 billion from the preceding month and corresponding month in 2020.

“Disbursements during the month amounted to $663.8 million, of which $644.6 million was received by the public sector, which included $567.3 million from IMF for addressing the social and economic impact of the pandemic, and the balance was disbursement to the private sector. External debt service payments amounted to $72.8 million, out of which $54 million was principal and the balance was interest payments” the BoT report argued.

In this sector of the economy which pumps a significant amount of income to Tanzania, performance was stable.

From the review, the bank depicted exports of goods and services stood at $9.44 billion in the year ending September 2021, which is higher than $8.88 billion in the same month last year.

This increment is argued to be contributed by the increase in exports of minerals, manufactured goods, cereals and horticultural products.

On gold—which is one of Tanzania’s high marked export materials, numbers rose. According to the review, gold exports increase by $59.9 million to around $2.88 billion and accounted for 43 per cent of good export.

As agriculture becomes a more stable sector, the report depicted that, export of rice in particular “amounted to $303.4 million compared with $97.4 million, reflecting efforts made to improve cross-border trade,”

However, the review also pointed out, traditional exports took a bit of a nose dive to $681.8 million compared with $888 million recorded in the corresponding period in 2020, “with all export values decreasing, save for coffee, sisal and cloves”. 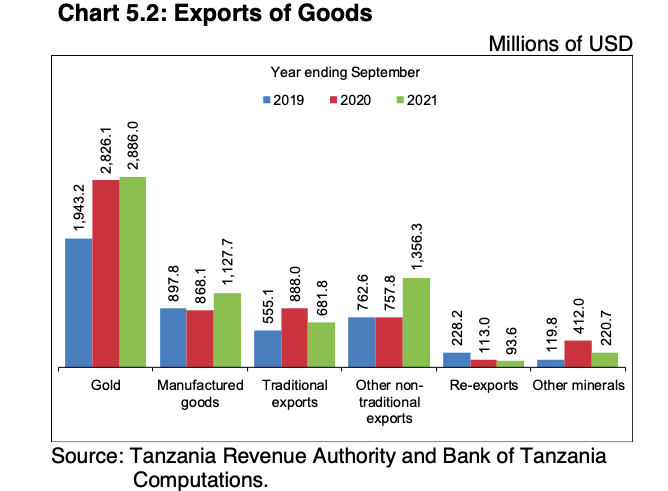 The bank review noted the imports of goods and services increased to around $10.4 billion during the year ending September 2021 from around $9.62 billion in the same month in 2020.

“The increase was observed in all import categories, except fertilizers. Oil imports increased by 18.3 per cent to $1,734.2 million due to the price effect and accounted for almost a fifth of the goods import bill. Services payments amounted to $1,437.1 million compared to $ 1,480.2 million. Transport payments, particularly freight, rose consistent with the increase in goods import”