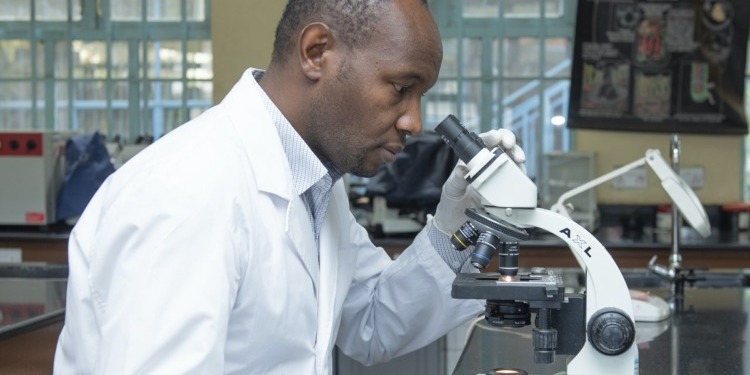 A research lab. Many African governments don’t spend a significant percentage of their GDP on research. [Photo/AAS]

Many African researchers in academia often don’t get the support or the acknowledgement for past or current research.

A modern economy in the Western hemisphere, especially one in Europe or North America thrives on research and innovation from academia and the private sector.

In the UK, many startups and innovations were born out of research labs in academia. Imperial College, Oxford and Cambridge are perfect examples of this. Most OECD countries use a good percentage of their GDP to support research and innovation for their academic and research institutions.

Unfortunately where I do much of my work, Africa, generates less than 1 per cent of the world’s research. I should know, being the CEO and Founder of eNubia, we partner and assist universities and their research institutes to scale impactful research to solve local challenges.

We do this through a variety of various means – we utilize our global African Diaspora network to support commercialization efforts.

There are reasons why many African governments don’t spend a significant percentage of their GDP on research, or do significant research experimentation, or implement moon shot projects. Although, some efforts in Morocco, Rwanda and Botswana are very promising. However, many African researchers who do research in academia, often don’t get the support or the acknowledgement or recognition for past or current research. Many African Diaspora researchers who have returned to the African continent have been educated in the UK, US, Germany, and even China. These researchers have the intellect, gumption, and know-how to scale innovative research that can solve our challenges in Africa through commercialization.

In most OECD countries, commercialization of research and innovation from research labs is very commonplace and is a foundation to establish national, region and global tech and industrial titans. Where is Africa with this strategy? And, how can Africa engage and attract its Diaspora professionals to scale groundbreaking research innovations that can scale and solve local problems?

Furthermore, these African researchers work on projects that have the potential to impact Africa and mankind. Think about all the lifesaving medications we take every day, Yes, an African researcher may have research or innovation in Life Science that could save thousands or even millions of lives per year. In tropic Africa, we have the largest biodiversity in the world – can an enzyme from a plant with the help from the latest Artificial Intelligence, come up with the next billion-dollar drug?

Or, imagine a Ghanaian Material Science researcher finding a Nanomaterial that can be used in a plane, windmill or electric turbine?

In addition, many of these researchers are millennials who are doing research but don’t have the ability to scale their research because of the lack of support. Collaboration is key for exponential research, but the real opportunity is to collaborate with their peers in another African country, and outside the continent.

The African continent has come a long way in the past 20 years; today we have about 1.3 billion inhabitants spread across 55 countries in Africa. Some say the continent will reach 2 billion people in about 20 years. How will this impact food security, climate change and livelihoods? And, how can African researchers be utilized to come up with the next great research and innovations on the continent?

As we live through this Covid pandemic, many of Africa’s leaders have made many efforts to ask Western countries for vaccines, which Africa and other frontier markets desperately need. Imagine if most of these countries were to put a plan in place to support indigenous vaccine production, and to engage African diaspora scientists and researchers who work at some of the top global pharmaceutical and life science companies?

In addition, the African continent has the brains and scientists to make our own vaccines, drugs and other medicinal products.

Read: The Fintech Unicorns of Nigeria

How did India become the world’s top vaccine producer despite their challenges? The answer lies through planning, foresight and utilizing their diaspora professionals. As of this writing, you can expect an Indian Diaspora professional to lead a major tech, consumer goods or industrial company (Alphabet, IBM and Reckitt) – India utilizes their diaspora to support its development needs. How can Africa follow suit?

For example, the Indian government not only embraces their Indian diaspora, but also encourage them to come home and start companies. Oftentimes, tax breaks and incentives are used to incentivize many of these professionals. Have you heard of Wipro or Reliance Industries? These are tech and industrial companies started or run by Indian diaspora returnees. The Indian government not only embraces its diaspora – it has an ongoing relationship with them. African governments and Africans should take notice of this.

For example, in Ghana, we just had our ‘Year of Return,’ which contributed a couple of billions into our economy through cultural activities – music, art and trade. Year of Return coincided with the 400 years since the first slave ships landed in Jamestown, Virginia in the U.S. Many of these descendant diasporas coming for the Year of the Return were from the U.S. – many of these professionals have never been to Africa before but wanted to know about their ancestors who were slaves and Ghana’s culture. Some of these descendant diaspora professionals want to actually do business and bring their professional talents to Ghana.

India, Ghana, Ethiopia and Rwanda are outliers for doing a decent job to embrace their diasporas, what about other African countries? While Ghana engages African diasporas for cultural activities, it could also include science and research innovation within those efforts. We have to look at methods to utilize and engage this demographic, to support research and innovation in Africa.

Currently, some Tech companies like IBM, Google and others are starting to realize they need to pay attention to African research and innovation and have opened R&D labs in Africa. Some have engaged diaspora professionals to run these labs because of their global and local know-how and experience. IBM has a research centre in Kenya and South Africa; Google has an Artificial Intelligence lab in Ghana. Why have they chosen to be on the continent?

My guess is they want to know what are the new innovations startups and others are working on, and they want to identify new trends that can be commercialized. To have this kind of foresight is business smart, but it’s a must going forth. In 30 years, One in Five people in the world will be African – so you better be in Africa to embrace new trends before your competitors do.

Research can be long and tedious – you don’t know what you’ll find, but once you have made a discovery you think is exciting, it can become an innovation and solve our challenges in Africa.

Read: Google investing $1B for digital transformation in Africa

Nii Simmonds is the CEO and Founder, eNubia.