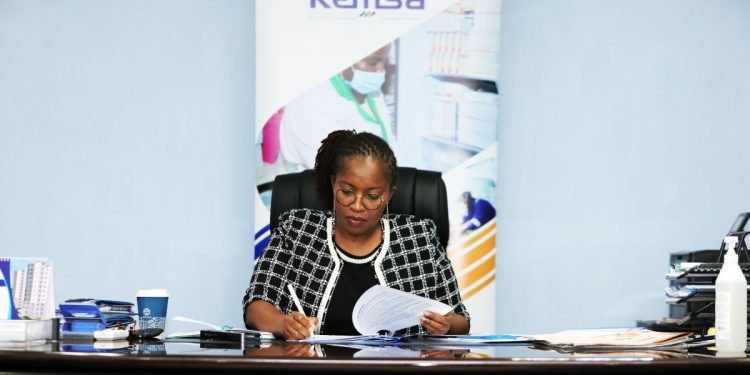 The Kenya Medical Supplies Authority (KEMSA) has announced that it is on course to collect more than KSh 2.7 billion or $23.2 million owed by county governments, months after appealing for settlement of the bills which had run into billions.

On Wednesday, May 25, 2022, the Kenyan state agency said it was undertaking stakeholder engagement that was focused on a credit management strategy.

Under the deal, the authority said it has set a target of collecting at least KSh 500 million or $4.2 million in outstanding dues from county governments to boost its service delivery capacity.

According to the new CEO, the enhancement of the Credit Management functions under an independent department is also geared at ensuring the financial sustainability of the KEMSA revolving fund.

Ramadhani said the speedy settlement of pending bills at KEMSA by the Counties will help speed up the payment of KEMSA suppliers who are currently owed KSh  2 billion in overdue accounts.

“We have undertaken structural changes that allow for a more efficient credit management process with our stakeholders at the core. The recently adopted credit management strategy is bearing fruit. The earlier KSh 3.9 billion debt has now dropped to KSh 2.7billion with nine counties having cleared their outstanding accounts with KEMSA,” Ramadhani said.

KEMSA has also stepped up deliveries to the counties with increased credit sales collections. As of mid-April 2022, KEMSA successfully dispatched KSh 9.73billion worth of Essential Medicines and Medical Supplies (EMMS) and National Health Strategic Programs (NHSP) supplies to 47 Counties.

The agency added that over 32,000 EMMS and NSPHP supplies were dispatched to more than 7,600 health facilities countrywide.

The revelation by KEMSA comes months after the Kenyan parastatal issued an appeal to county governments to prioritise the settlement of more than KSh 3.9 Billion pending bills to the authority.

The authority’s chairperson Mary Mwadime said the settlement of the bills would help speed up reforms at the authority, which were being implemented to curb mismanagement of funds.

Mwandime revealed that some county governments had extended much-needed support to KEMSA by prioritising the settlement of bills to keep the authority’s cogwheels running as the organisational reforms to address systemic challenges.

In a separate report, The Exchange Africa recently reported that KEMSA has formally activated an automated purchase order generation system as part of cross-cutting reforms at the state agency.

In April 2022, KEMSA said it introduced an electronic Local Purchase Order (LPO) generation process as part of its transformation journey.

The automation of the Procurement process and elimination of manual procedures that require human intervention, such as the issuance of LPO, was also part of the Authority’s ethics and integrity assurance strategy.

Speaking during the launch of the system, the then acting CEO John Kabuchi said automation of critical functions would enhance the Authority’s efficiency levels.

“Automating the LPO process will ensure that we eliminate the time spent for suppliers to pick the physical copy before making deliveries of medical supplies,” explained Kabuchi.

“Such automation also eliminates the need for human intervention, which has been a key organisational integrity risk area,” he added.

The electronic local purchase order would be encrypted with a unique password for security purposes.

“Soon, we will also automate contracting so that suppliers don’t come to KEMSA to sign the contracts but rather they shall be emailed to them for their perusal and signing before submitting to us. By doing this, we will reduce the delays that occur when the signing parties are not available at the same time.”

Further, he informed the local manufacturers that all LPOs would have an expiry date to tame the delays witnessed when suppliers took too long to deliver under open-ended delivery timelines.