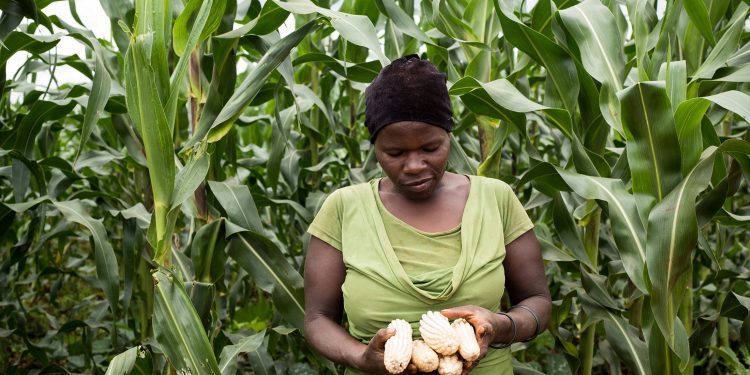 African agriculture is essential and necessary to African food systems and the economy at large: Photo by One Acre Fund

African agriculture contributes around 23 percent of GDP to the region economy according to a 2019 Mckinsey publication.

Agriculture in Africa has not only an economic value but a cultural significance.  It is time to transform the economy and lives of African farmers. Africa is home to nearly 60 percent of the world’s arable land. Over the past decade, African agriculture has faced a number of shocks which beg for technological transformation. Farming in Africa contributes greatly to the welfare of most rural-based populations.

Despite the standing potential, productivity in Africa is lagging; hence, the role of modern technology stands to draw billions into it.Africa imports some food items abroad, such as wheat from war-entangled nations Ukraine and Russia, causing severe food insecurity issues for financially constrained nations such as Sudan.

Agriculture is not only the principal employer, but it contributes 14 percent of sub-Saharan Africa’s GDP (Oxford Business Group).

The adoption of modern technology in agriculture does not only prove to be essential but inevitable. The latter boosts vital farming components across the region, including irrigation 6 percent of sub-Saharan Africa’s cropland is irrigated (Global Agricultural Productivity).

More than 60 percent of sub-Saharan Africa’s population is made of small-hold farmers, but most are far from tapping into mechanization.

On a broader scale, the United Nations (UN)argues that—as the region’s population is expected to double by 2050, the continent needs more than women hoe to feed itself—as women compose the majority of food producers.

READ:Top reasons why agriculture players in Africa should use Artificial Intelligence

Further, the UN pointed out the grave need for mechanization for Africa’s cropland sustainability. Africa has less than two tractors per 1,000 hectares of cropland.

In terms of numbers, figures say it all. The region can reverse billions spent on food importation and reinvest it in the farmlands.

Sadly, Africa, with collective GDP of around $2.6, spends nearly $43 billion annually on food imports, according to Brookings, Washington based think-tank 2020 publication.

The region is faced with a myriad of challenges sucking the life of the agriculture sector. Political instability, recessions, drought and locusts need a robust foundation of relevant and robust digital technologies to transform farming.

READ:Agriculture Ministers commit to focus on innovation, profitability of farmers

Around 40 percent of global agricultural production comes from 20 percent of irrigated land. Thus, Africa has more arable to complement two to three times more cereals and grains for the world if it invested in irrigation.

The history of Irrigation has deep roots. History can be traced from 1938 in Mali with French colonialists authorities established an ambitious irrigation scheme—diverting water from the Niger River to irrigate one million hectares of fertile land.

According to information from The Conversation, an independent news source, since 2008, the government has brought various plans to levitate irrigation, amounting to 79 constructed across sub-Saharan Africa between the 1940s and 2010.

Africa has been facing severe challenges on this vital farmland input—as it is a rain-fed agriculture-based region.

“Currently, no more than 5-6 percent of Africa’s cropland is irrigated, and this value has increased only slightly during recent years. This is despite the enormous potential to expand irrigation in Africa.”

GAP argues that nearly 96 million hectares in sub-Saharan Africa can be irrigated by smallholders with the right and relevant technology, ultimately benefiting more than 369 million people.

In the case of best performers, South Africa has an interesting take. Irrigation in South Africa contributed to  25 to 30 percent of  agricultural production.

By 2018 only 12 African countries, including Malawi, Rwanda, Mali, Tanzania, Zambia, Morocco and Ethiopia, according to the UN 2019 report, had proper mechanization structures within their agriculture sectors.

The region is arguably found to have the least mechanized agricultural systems globally.

African farmers have only one-tenth as mechanized tools per farm area as farmers in other developing regions, and access has grown slower (GAP).

However, in Uganda, despite the considerable barriers to acquiring the technology, access to tractors improves agricultural productivity for small-scale farmers much more than other inputs such as fertilizer (GAP).

There is good news coming out of the region which projects the trend of improvement in this sector.

“Major agri-business companies such as John Deere have also started projects to bring increased access to tractors to farmers in SSA. John Deere partners with the African company Hello Tractor to make 10,000 new tractors available to smallholders in Nigeria and Kenya. Farmers can affordably hire tractors for short term use, allowing them to make use of the productivity-enhancing technology without needing the significant capital investment of buying the machines outright,” According to GAP.

ThriveAgric, a fast-growing technology-driven agricultural company, is another example of efforts made by Africa to capitalize on modern technology potential in agriculture.

Recently it has raised $56.4 million in debt funding from local commercial banks and institutional investors. Thrive Agric empowers farmers in Nigeria to sell their products to fast-moving consumer goods and food processors, leveraging its proprietary technology to access finance and improve productivity and sales to promote food security (AppsAfrica).

Africa has to be comfortable adopting transformative digital technology to address its farming challenges.

From COVID-19 to the current looming food crisis triggered by the Russia-Ukraine war have proved how vulnerable Africa’s food systems are to external factors.

The latter is clear-cut evidence of why the region ought to promote technological adoption on farmlands especially for smallhold farmers.